Has This Man Solved The Roman Dodecahedron Mystery? 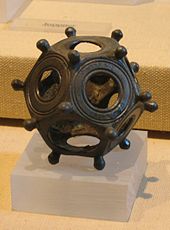 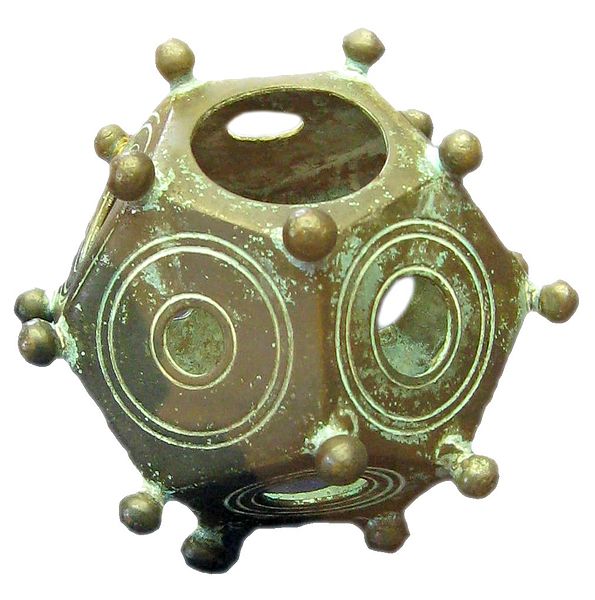 And a quick description from WIKI:


A Roman dodecahedron is a small hollow object made of bronze or stone, with a dodecahedral shape: twelve flat pentagonal faces, each having a circular hole in the middle which connects to the hollowed-out center. Roman dodecahedra date from the 2nd or 3rd centuries CE.

About a hundred of these dodecahedra have been found[1] from Wales to Hungary and to the east of Italy, with most found in Germany and France. Ranging from 4 cm to 11 cm in size, they also vary in terms of textures. Most of them are made of bronze but some also seem to be made of stone.

The function or use of the dodecahedra is unknown; no mention of them has been found in contemporary accounts or pictures of the time. Speculated uses include candlestick holders (wax was found inside one example); dice; survey instruments;[2] devices for determining the optimal sowing date for winter grain;[3] that they were used to calibrate water pipes; and army standard bases. It has also been suggested that they may have been religious artifacts of some kind. This latter speculation is based on the fact that most of the examples have been found in Gallo-Roman sites.[4][5]

So these objects have perplexed scientists for quite some time about their purpose.
FOX NEWS: History mystery.

In many cases where perplexing ancient mysteries are observed and considered by modern science, we tend to project complex scientific possibilities onto the circumstances, leading to wild speculation ranging from things like “ancient alien theory” to ancient power plants nestled within monuments like the pyramids. It is not always demeaning to suppose that in many cases, there could be a simpler explanation… and indeed, one that could have been far more practical to the ancient way of life.

And for one man, this kind of practical thinking led him to finding a unique use for the Roman dodecahedrons… as well as a possible solution to their creation in ancient times.

SO Using a 3D printer, he had a scale replica of one of the dodecahedrons made, and then went to work experimenting… with string.
Is this truly what the mysterious Roman dodecahedrons were meant to do?
This is what I love about life's mysteries, because they usually remain just that.

posted on Jun, 3 2014 @ 12:41 PM
link
Impressive intuition. Are there any examples of this type of woolen gloves in the records?

posted on Jun, 3 2014 @ 12:51 PM
link
I was going to search for a video on how to crochet a glove but after seeing the first 5 minutes of a 45 minutes video i was so bored that cannot deny this is the only possible use for the Dodecahedron

Now that is quite brilliant. It's like a super charged version of the ancient card weaving method and seems utterly plausible to me.

Practical explanations for mysterious items that are found in considerable quantity are usually the most likely, and considering how many woollen gloves would have been needed this is easily the best explanation i've seen for these - and demonstrated so well too.

I'd love to see what some of ATS's knitters and weavers think of this.

posted on Jun, 3 2014 @ 12:59 PM
link
It could be a representation of the divisions of the heavens. There is an ancient belief that the true Earth is actually shaped like a dodecahedron. The Egyptians, and Cherokee hold similar views on this topic. They actually said that these were holes ,eyes or halls leading to other planets/star systems. My theory is that these halls lead to ancestral home worlds. Lyra, Sirius, Pleiades etc. The Egyptians called this Star walking. This was the afterlife ability to traverse the heavens at conscious will. In other words, the Soul and Mind leaving Earth for reaches far beyond. This would be achieved using your Lightbody. The physical body has restrictions. The Soul/Spirit has none. This could also explain how the ancients could know about distant star systems. They didn't need rockets to travel through space, just there Souls and consciousness.

posted on Jun, 3 2014 @ 01:07 PM
link
That took awful lot time and the result was poor. With crochet needle you can do it in less than a hour and much thicker and warm ( and tool less heavier ). I wonder did a hook even crossed his mind while doing this demostration.
I believe he found out an alternative use for the dodecahedron but not the original one.

posted on Jun, 3 2014 @ 01:07 PM
link
I've done a quick search regarding knitting in Ancient Rome, in in that limited time i have not come up with much of any substance except an old re-enactment forum page.... RomanArmyTalk

It is suggested here that the Romans had no word for knitting, and that the earliest knitted artefacts discovered so far date from about 400 ad - but this is qualified by stating that this assumes the use of two needles.

Also, i am now reading up on the history of knitting \m/

Blackmarketeer
+2 more
posted on Jun, 3 2014 @ 01:10 PM
link
Small problem with his theory is that some of these would be too small for use in making gloves, although it has been suggested in the past they might have been used for finger ring-size gauges.

Another anomaly is that their are similar versions of these that are not dodecahedron, but icosahedron; they lack the "finger holes" and necessary number of faces for making gloves. So it would seem that these preclude his solution as to their purpose. 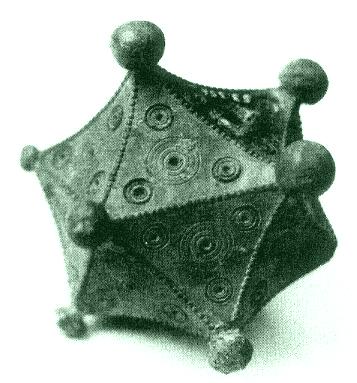 Interestingly enough, dodecahedra have been around since before Roman times and the Romans could have learned of these from the Etruscans; Etruscan dodecahedron from Monte Loffa: 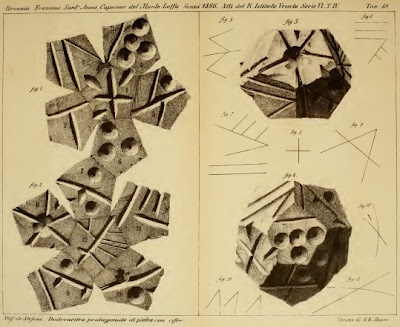 You can also see some of the Etruscan ones look very much like the later Roman ones in this PDF text:


There are much easier ways to make a glove that this technique.
Besides, if those dodecahedra are that small, who are they making gloves
for in that size??

A crochet hook would be much easier, although I have seen and used
other methods to crochet a tubular piece, such as this: A spool of thread
is 2 inches long, and what it would produce is what would fit over a pencil.

This guy made his replica larger than the size range of these things to
produce a larger finger tube. 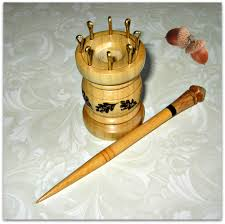 posted on Jun, 3 2014 @ 01:21 PM
link
Maybe it was for solving seasons and months,as you see the holes are different sizes and so are the circles around them. Moon, sun and when its a good time to sowing etc.

posted on Jun, 3 2014 @ 01:23 PM
link
I always thought that it was something for building equipment, like a scaffolding joint.
Maybe it was a multipurpose tool. About gloves, I'm not so sure, but it does look as though at least part of the set-up included the use of string, or some kind of thread.

posted on Jun, 3 2014 @ 01:36 PM
link
Perhaps they were used for sealing scrolls with wax? That would explain the wax residue found and the holes of different sizes. Or maybe the Roman equivalent of office in/out/pending trays - just place a scroll in each hole. Bronze and stone would be ideal for this, because iron and copper would rust and leave residue.

I had ideas about being an incense burner, storage, or pot-plant holders (in all cases, too many holes). But if you had a scroll needing sealing and binding with thread, you could just place it into one of those holes, ties the thread around a couple of those protusions, and then stamp it with wax.

A glove has 5 fingers. Even if you made two gloves at once it still only would require 10 holes.

If this really was it's intended purpose then why the extra holes?

I wonder if it could simply be a model used by a Roman teacher to give different mathematical demonstrations to a class of students.

posted on Jun, 3 2014 @ 01:57 PM
link
a reply to: skyblueworld
Without following any of the links, I thought it had been established that they were caltrops...made for messing with the enemy's horses.

posted on Jun, 3 2014 @ 02:27 PM
link
The fundamental significance of the dodecahedron is spiritual. That is why it came to be associated with the fifth Element - Aether - as the root substance and origin of the physical universe compounded from the first four Elements, whose particles were thought to have the shapes of the first four Platonic solids. The true mathematical reason (not the one known to scholars) why, following the ancient Pythagoreans, the latter were associated with the physics of matter has now been discovered. So has the reason why the dodecahedron was associated with the celestial sphere (cosmic space). Their amazing, mathematical properties in this context has been unknown to mathematicians until recently, when a systematic analysis of the sacred geometries of the world's religions was made that revealed the astounding connection between the five Platonic solids and the group theory of E8, SO(32) and E8xE8 at the heart of superstring theory. See here and pages 19, 20, 22, 31 & 39 linked here. On that website you will discover the profound mathematical gnosis embodied in the five regular polyhedra.

originally posted by: MagicWand67
A Dodecahedron has 12 sides which means 12 holes.

A glove has 5 fingers. Even if you made two gloves at once it still only would require 10 holes.

If this really was it's intended purpose then why the extra holes?

I wonder if it could simply be a model used by a Roman teacher to give different mathematical demonstrations to a class of students.

+1 for each wrist makes 12 holes? Don't know as I can't watch video at work, but still can't imagine these were used for making gloves....

posted on Jun, 3 2014 @ 03:51 PM
link
I think of all the theories proposed, the wax seal embosser fits best. The "knobs" would act as stand-offs, allowing the seal to be pressed to a specific depth. Each face contains a unique design depending on where a letter may be destined or to whom it's sent. The holes may have contained a hardened wax design that would be changed time to time (to prevent forgeries). That could explain the wax residue in some of the artifacts. When it's time to change a seal, heat the dodecahedron, and the old wax melts away. Refill it and carve your new design and your back in business. (Hardened wax can still emboss soft molten wax.)

Alternatively, the holes may have been left open so that once the dodecahedron was pressed into molten wax, it left the center un-embossed, where the signor could then press his signet ring to assure the recipient of who sent it. In a rank and file Roman province, there would have been different levels of importance of those sending letters (Generals, Consuls, Governor, etc.), so that might explain why the need for different designs in the faces of the artifact.

Another factor in the mystery of these objects is that they are found in mainly European locations held by Rome. The use of letters and couriers sealed by wax may have been the reason why.

Edit to add:
Another reason for the variations in designs on the 12 sides might be to give the embossed seals a "progression", a crude enigma-like encoding. Each subsequent letter would use the next design in embossing only the sender and receiver would be privy to, say for instance, the next smaller seal impression on the dodecahedron. This way, if a letter is intercepted by an enemy, they would only be able to copy the seal design they have in front of them. They wouldn't know the seals vary and thus they'd inadvertently reveal the letter was compromised.
edit on 3-6-2014 by Blackmarketeer because: (no reason given)

I've always assumed (probably wrongly) that they were the great, great grandchildren of these: 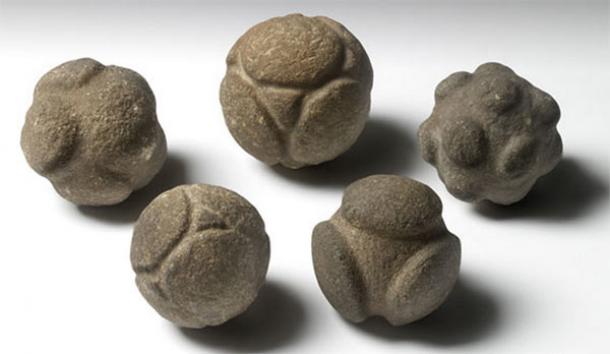 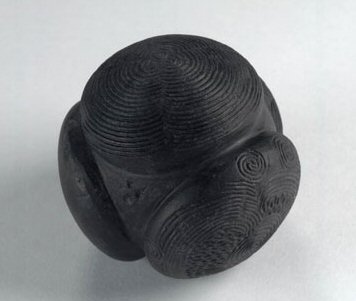