Strange phenomena happened yesterday in the coast of Venezuela

page: 1
70
<<   2  3  4 >>
log in
join
share:
Indigent
+23 more
posted on Jun, 3 2014 @ 07:57 AM
link
Although I was born in Venezuela i don't live there anymore, but i check the newspapers from there everyday. Yesterday at 3pm local time during a few hours the sea receded 4 meters in the shorts of the central state of Miranda near the capital Caracas, the authorities reported that the sea levels returned to normality at 6pm. 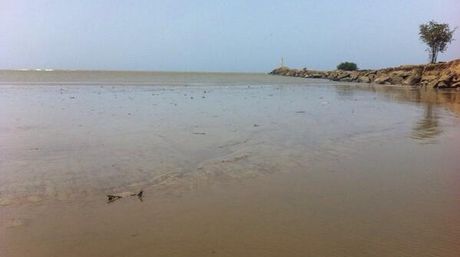 The first reports came via twitter were users made claims of the end of the world, the Venezuelan seismic society quickly disregard the possibility of tsunami but no possible explanation has been issue on the phenomena.

It seems a few years ago something similar happened without further consequences.

Strange, what you think is the cause of this, not something ordinary to catch the attention of the local media in my opinion.

Where can i find tides data for the Caribbean sea?
edit on 3-6-2014 by Indigent because: (no reason given)

I see no earthquakes on usgs.

maybe there was an underwater landslide somewhere with no earthquake associated with it.

you'd think tsunami but that's not the case.

Aleister
+26 more
posted on Jun, 3 2014 @ 08:14 AM
link
At first I couldn't read most of your post because of the giant Jeep ad that keeps unfolding across the page each time I X it out, but after writing this I was able to, and that is a very strange phenomena (both the ocean and the jeep ad). It would have had to be a massive outward pull to create an area-specific lowering of the ocean, and besides earthquake or Godzilla it's hard to think of an explanation. Nice find.
edit on 3-6-2014 by Aleister because: (no reason given)

originally posted by: manna2
Ok i will throw one out there.
is this from the earths axis shifting?
a reply to: Indigent


No. If the Earth's axis shifted then all the stars would appear to be in the wrong place, among other things.


According to this link, the same thing happened three years ago in this region:

All the same, if I was on the beach and the sea suddenly retreated like that, I would be getting to high ground pronto!

posted on Jun, 3 2014 @ 08:33 AM
link
Ok, i did not mean the full shift. More like a wobble as it is shifting. Maybe even close to the tipping point. And we have either the magnetic or the physical pole shift to considera reply to: Rob48

posted on Jun, 3 2014 @ 08:33 AM
link
Sorry bout that, I left the plug out for a bit and forgot it.
I did replace it when I realized my error though.
Seriously though, I agree with Rob and would be heading for the hills.

posted on Jun, 3 2014 @ 09:14 AM
link
Back in 1979 something similar happend out at Key West.
The sea slowly retreated about 15 feet, and just as slowly returned to about 5 feet above normal.
One hour later everything was normal.

No tsunami or anything like that.
edit on 3-6-2014 by Ivar_Karlsen because: (no reason given)

Tsunami incoming! I would have run, too!

posted on Jun, 3 2014 @ 09:24 AM
link
Any possibility a large meteor splash far out to see where there would no witnesses could cause the water to recede but then slowly return to normal rather than with a tsunami? That would be my guess anyhow and probably the same thing that happened in 1979 in Key West.

posted on Jun, 3 2014 @ 09:28 AM
link
I wonder if it's possible the plate flexed and rendered the withdrawal & return of the water. I'd be interested in seeing any possible elevation data to see if the height increased and decreased on either plate in the area, if that kind of data even exists. It seems plausible that it could happen anyway, kind of like taking a breath in & letting it out.

I'm curious, did the previous event happen to have any major earthquakes on the S American or Caribbean plates afterward? If so, maybe it's akin to the plate hitting a snag & thus an elevation change & water receding.

posted on Jun, 3 2014 @ 09:34 AM
link
a reply to: Rezlooper
We were told by geologists and volcanologists that whatever it was it wasn't related to eartquake, volcanic eruption, land slide or any heavy object falling into the water as that would have created a tsunami with violent displacement of water.

posted on Jun, 3 2014 @ 09:40 AM
link
What about that area of the ocean off off the Venezuelan coast being somehow connected to an underground ocean?There is lots of conjecture and some geological evidence that they exist, right? Maybe something happened deep within an undersea cavern connecting the two? Maybe a connection point had some geological activity and the two connected oceans were simply seeking an equilibrium?
edit on 6/3/2014 by kosmicjack because: (no reason given)

Could have been a massive USO mothership leaving at 3pm for an early lunch or galactic conference and returning at 6pm. (Cloaked)
edit on 0748x6707America/ChicagovAmerica/Chicago6 by six67seven because: (no reason given)

So water retreated 4 meters at 3 pm and came back to normal only 3 hours later.

I checked with the Moon - no match there neither. It wasn't caused by the Sun, neither by the Moon's tidal pull.

is it possible a large object like a UFO / IFO could have displaced water in such a way that this particular spot would show such an increase in water level? For instance, a very very localised event..... something invisible yet with mass entered and possibly exited the ocean near this place?

increase in ocean level at greater distances would not be noticed, thus a very localised increase.

posted on Jun, 3 2014 @ 09:51 AM
link
Do we have satellites monitoring Earth's gravity in real-time? Has there been a change in mass somewhere in the globe recently?

Technically, Earth isn't suppose to lose much mass, actually it's supposed to gain some because of the meteorites falling on it, but we need to proceed by elimination.