Building pyramids with giants and fohat.

Inspiration for the technology.

The lost labyrinth, full of hieroglyphs sculpted for eternity in its endless stone walls is believed to contain all knowledge of ancient Egypt.

What secrets does this legendary giant underground complex contain?

Could this be the most important discovery in human history?

The Labyrinth of Egypt has been described by a number of ancient writers such as Herodotus, Strabo, Diodorus, and Pliny. The labyrinth's age and ancient origins are unclear, but at the time of Herodotus' visit it was more than 1,300 years old.

This legendary complex, named the "Labyrinth" by the ancient Greeks was legendary complex is believed to be an enormous collective tomb of the twelve kings who built it and a resting place for sacred crocodiles. Located at Hawara, about 90 km south of modern Cairo the complex contains secret chambers, passages shrines and tombs.

Herodotus wrote of the Labyrinth in the fifth century B.C. (History, 2.148-49): 'It has twelve covered courts - six in a row facing north, six south - the gates of the one range exactly fronting the gates of the other.

Inside, the building is of two storeys and contains three thousand rooms, of which half are underground, and the other half directly above them.

I was taken through the rooms in the upper storey, so what I shall say of them is from my own observation, but the underground ones I can speak of only from report, because the Egyptians in charge refused to let me see them, as they contain the tombs of the kings who built the labyrinth, and also the tombs of the sacred crocodiles. 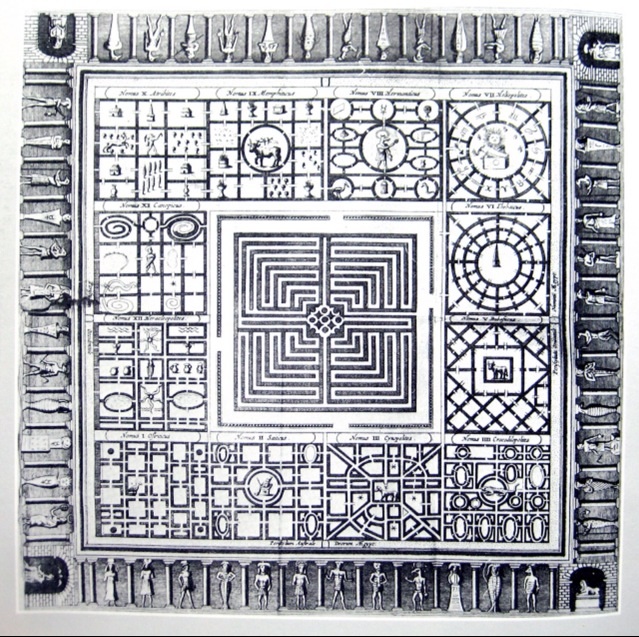 Looking at the engraving, It seems that they might have been working with different parts of consciousness and mapping it out by building a labyrinth of rooms and doors. A virtual, virtual reality with themed rooms to recreate experiences, and harness power/energy.

Funnily enough this video...
(listen while studying the labyrinth above)

A Virtual Exploration of the Lost Labyrinth: Developing a Reconstructive Model of Hawara Labyrinth Pyramid Complex

This paper reports on a case study that explores the possibility of reproducing a destroyed historic site from its remaining artefacts.

Using VR (virtual reality) technologies, we construct a series of low-end, 3D models that are navigable through the Web.

This gives us the opportunity to visualise, explore and present ancient sites in their original form. We focus mainly on the Hawara Labyrinth site.

However, the method developed is generic in that it is applicable to other sites and artefacts that require reconstruction and dissemination using digital technologies.

that is all the technology that is needed in this theory, But there is someone I must also introduce you to...

On with the theory.

I did a search on the quarry site in Egypt where some of the stone was taken from for the pyramids, it has all the hallmarks that it was built by hand... But the size of the hands would have to be huge!

Look at the markings in the rock face it has been tooled ready to make it flat..

The holes in the wall in a line are for splitting the rock off into blocks...


Splitting rock is easy enough once you have drilled holes... How do you drill solid rock with ancient tools?... I found a video that made that look easy...


So all the hall marks of hand tools show that the masonary was hand cut.

The only deviations over weather humans could do this is size and time!

Did the Egyptians create giants to do the building for them?...

Giants carved out of rock! Brought to life using fohat?

The labyrinth(chip) is plugged into the earth and the "activity" inside is the program. Where the Egyptians working their magic in the labyrinth and the giants working the quarry???
edit on 2-6-2014 by Wifibrains because: (no reason given)

If reality is like a hologram, perhaps egyptian "magic" could hack the hologram downloading life into the giant carvings bringing them to life. I know this is "out there," but remember fohat?

If this magic was real it would give a motive to the builders of the Terracotta Army that was found buried.

Iisten to the first few mins of this manly p hall lecture...

This process was acted out at the 2012 Olympics ceremony...

The Egyptians worked with the dead in the afterlife....

just another coincidence I'm sure, but... at the Olympic ceremony the mummy's built the pyramid!

You have to use your imagination for it to work. lol
edit on 2-6-2014 by Wifibrains because: (no reason given)


Research like this is what convinced me that machines were used on the Pyramids and Temples in Egypt
edit on 2/6/2014 by douglas5 because: brain fog

I too have always thought that the Egyptians depicted exactly what they saw: Giants, and Chimera creatures.

It wouldn't take much effort or technology to build a pyramid if giant people were doing the hammering, hauling and lifting - that would also free up all the little people to get on with chiselling.

Great thread by the way. Right up my street.

posted on Jun, 2 2014 @ 07:22 PM
link
Wonderfully done thread! Fascinating information, and I like your imagination!

When I was much younger, I had complete faith that the mysteries of the pyramids would be solved in my lifetime. I have begun to realize that most of science insists on thinking 'inside the box', so the secrets of the universe will remain safe for a while longer.
S&F

This video is what most people would take as 100% truth..

posted on Jun, 2 2014 @ 08:48 PM
link
a reply to: Wifibrains
Thoth the Atlantean, Hermes or whatever you want to call him or it, I do believe knew the real key to the Pyramids, the theosophists that like claiming Atlantean ancestry, fully believe in FOHAT as the main basis for the ALL and the primordial light they always refer to, so with that sir, I really want to agree with you, this also makes you wonder if they did posses the means to manifest or animate matter with a spirit by some hidden or occult process, and if so then how intelligent or controllable was it ?

You have to also think that other heavenly bodies had different or closer distance to the earth and that the earth may have been smaller in size, not sure whether it was less massive, if you believe in expanding earth and plate tectonics driven by vulcanism and plain old existence in space and time, what were the properties of earth and influence such as radiation etc that no longer exist or have weakened since those periods.

I always looked at the seated statue of Amenhotep III at the British Museum and remain in awe of the full detail of toes etc and the symmetry of the statues, and there are many other examples of unbelievably lifelike statues in Antiquity one has to wonder how such perfection was achieved so long ago in works of art and statues when in other parts of the world simple cave paintings and basic totem structures were being built.

So then you have to wonder if the attempts were made much later in history and there is evidence that it was possibly accomplished, Golem were created by magical methods, so in that form it appears it was very basic and pretty stupid.

But suppose the extra strength or original recipe for full animation were lost through time and only the basics of Golem or animation were saved but only gives us a ability to animate clay figures or dolls that really cannot do anything.

Also referring to the mythos of the King, SOL- OM -ON , he supposedly employed the use of demons or spirits who built the temple with not a single sound being made, or being emitted from any sort of tools.

I couldn't help but notice from the 'Reconstruction of the Labyrinth' that what one may be looking at is a square zodiac.
You have the 12 houses and many zodiacs have been drawn in a square as opposed to a circle. I do think that when one doesn't link the cosmos via the zodiac one looses a link to the mindset of the ancients.

My first thought also, there are 12 guys per side on the outline, with 4 sphinxes at the corners, indicating the 4 cardinal points (4 heads of the cherubim).

Also referring to the mythos of the King, SOL- OM -ON , he supposedly employed the use of demons or spirits who built the temple with not a single sound being made, or being emitted from any sort of tools.

Nice! I hadn't thought of that connection, it is basically the same thing.

originally posted by: Shiloh7
a reply to: Wifibrains

I couldn't help but notice from the 'Reconstruction of the Labyrinth' that what one may be looking at is a square zodiac.
You have the 12 houses and many zodiacs have been drawn in a square as opposed to a circle. I do think that when one doesn't link the cosmos via the zodiac one looses a link to the mindset of the ancients.

I think the zodiac is significant to the theory, a kind of doorway/vehicle for the consciousness to send the commands out into cosmos for the manifestation to come back to the physical plane via fohat.

The sun being a portal/communications hub administering the instructions from the constellations or even black holes.

originally posted by: zardust
a reply to: Shiloh7

My first thought also, there are 12 guys per side on the outline, with 4 sphinxes at the corners, indicating the 4 cardinal points (4 heads of the cherubim).

You don't miss a trick do ya? Lol.

Exactly what I saw. Cosmos, mapped out by mind creating a chariot of understanding for working with the divine.

I read up on Athanasius Kircher (the guy who made that diagram of the labyrinth) , wow thats an interesting guy.

Has anyone read "The Ra material" that is linked
by my signature's 2nd line?

It gives an alternative answer to how one of the pyramids was created !

Cool thread. Although I haven't searched on this website to see if this thread has been made, the ancient electricity theory in Egypt also has a lot of evidence to it. This just further supports that there truly is nothing new under the sun.

posted on Jun, 3 2014 @ 05:02 PM
link
Really awesome thread! Much to ponder and have yet to play through the videos. I love new angles to old mysteries and this thread doesn't disappoint. Thanks for sharing.