Why Estulin shared only seven topics?

The rest the oil price and bank crisis 2.0?

What they are planning for us next year?

* the demise of the USD as the Global 'reserve currency'


* the BRICS bank taking over for the corrupt & un-acceptable 'western' banking/finance system now in place (BIS/IMF/WorldBank/Federal Reserve/COMEX & the western-London-Bullion Banks)... getting replaced by a combined BRICS-Russian/Indian/China Financial-Trident


I will be posting (in the next hour or so) in the Thread: Financial Collapse Summary......
just what black-swan event will be orchestrated by the Fed Reserve/Treasury/and (banker cabal)
Specifically for just the USA itself
edit on st31140156838531332014 by St Udio because: (no reason given)

I don't disagree that people should be party to the minutes of these meetings, but what's being discussed is clearly stated on the agenda... aside the alleged two unpublished articles, of course. I just doubt those two unnamed articles are 'conquering the world' and 'the creation of a zombie super virus'.

Like you, I think this should be an open and honest matter. I don't like it any more than you do. That said, it's fairly obvious why it's so secret - some of the biggest businesses and political groups in the world are getting together to discuss their confidential commercial secrets.

If, for instance, Facebook/Google has developed some very unique piece of tech that might potentially pose privacy questions, then they need a place to discuss it with lawmakers. Similarly, lawmakers from around the world will want to discuss the EU's recent decision on privacy issues, and Facebook/Google will want to understand how that ruling might affect them.

Just a small example, but you can see why that discussion isn't public record. It's pure business. I don't think that's a good thing personally, but the motivations are completely obvious.

originally posted by: KingIcarus
I don't think, personally, that this Bilderberg stuff is anyhwere near as sinister as some people seem to think - although I can absolutely see why you might form that opinion.

This said - I do find iit both faintly amusing and nauseating that Privacy Regulations are set to be discussed in a setting much more private than any of the attendees would wish for the world outside that room.


I completely agree with you. Aside from the fact that the meeting is closed and guarded, there is not really anything definitive that even suggests something nefarious. Well perhaps the idea that powerful people are meeting in secret, but this occurs all the time, although maybe not on this scale, or with such diversity. But I still am not convinced that there is something nefarious going on.

I suspect they do not make any policy at all, but are issued instructions and it is their job to find some way to implement them. Many of the names are mere middle management and are not policy makers, neither are the elected officials. Orders are handed down from the real elite, people who you will never see.

What I find disturbing is the claim by many regular people that "no, this does not happen." I can see why those who rely on these folks to live at all would deny the event but one will find Joe Smith of Spokane WA saying, "shut up, there is no such thing, that's just a conspiracy" and I find that so disturbing. To me it is the same as one slave on the plantation denying he's under the control of the slave masters and saying this to the other slaves.

These events happen and a whole lot of people suffer repercussions as a result and yet so many who suffer demand we all see that these events do not happen and those who say such stupid things must be put in prison. I suspect the very first topic in the first meeting was to see how they could make sure the slaves never saw these events and if they did to make sure they would eat their own.

originally posted by: maghun
a reply to: Cancerwarrior
I remember reading rumours about $150 oil price, and "they" did not reach their target: 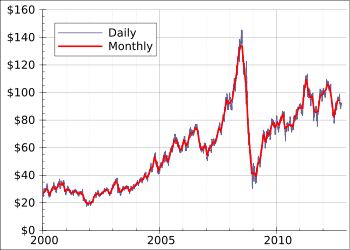 I dunno that looks pretty dang close to me. Not to mention influential does not mean all powerful. Some of you guys are missing the main point of whats going on. I have an issue with the blatant in your face Logan Act violations going on. If they are breaking the law from square one I do not see how they could be up to anything good inside those meetings besides collaboration for self / group gain at our expense. They do not get together to talk about giving all of their money to the poor that's for sure.

originally posted by: Pimpintology
If they are breaking the law from square one I do not see how they could be up to anything good inside those meetings besides collaboration for self / group gain at our expense. They do not get together to talk about giving all of their money to the poor that's for sure.

The original plan Joseph Retinger had with the Bilderberg meeting was a private summit meeting between influential Europeans and Americans to restore relations. I believe it was actually America not liking the idea of a secret meeting under a democracy, they agreed to holding these meeting but politicians were prohibited from attending.

I guess in this day and age it would be better to have atleast a few politicians present since big business is the one running the show anyway.

Can't stop the conglomerates from having private meetings and planning world domination.......oh yes there is...stop buying their stuff.

Peace
edit on 1-6-2014 by operation mindcrime because: (no reason given)

posted on Jun, 1 2014 @ 05:57 AM
link
What boggles my mind is people actually suggesting that there is not really anything sinister going on behind that massively secured meeting. Just a bunch guys talking business, sharing trade secrets and for once without the media luring talking dirty to each other.