posted on May, 31 2014 @ 06:25 AM
link
This thread is based on an interview of Jim Murray and Paul Babcock, who have both researched and been inspired by work of Nikola Tesla which is not understood and accepted by the mainstream.

These two individuals have spoken at what is now called the Energy Science and Technology Conference, where they saw the possibilities for collaboration, which they are now doing.

Murray says that Tesla's work is pre-electron theory and that he expressed things more in fluid dynamics. This makes Tesla's writings hard to decipher.

Murray and Babcock talked about borrowing some force from a motor and using it to cancel drag force, replacing it with motive force. Instead of having clashing magnetic fields, you can interlace energy back to the prime mover source.

It was mentioned that Newton's Third Law does not always apply to electromagnetics.

Doing things in quadrants rather than cycles and half cycles was also mentioned.

Paul Babcock explained that he learned from extensive experimentation that you have to be fast in switching transitions to beat magnetism and totally master it - the transitions have to be less that 5 nanoseconds.

Here is the interview:

posted on May, 31 2014 @ 07:03 AM
link
Of course they have not hooked the output back to the input to run it.... they know that they are scammers so they refuse to do such a simple test that would show their claims were valid!


Scammers? I enjoy the tomato throwers. They don't offer an equally cogent theory or argument why what they are shouting about is all wrong. They just hurl and run.

Hellobruce, I would like to see you provide documentation, a real argument negating their claim before I either agree or disagree with you.

In the meantime, poor form.

originally posted by: Mary Rose
It was mentioned that Newton's Third Law does not always apply to electromagnetics.

If you don't mind me saying, I would naturally be rather curious to know the source of this statement.

Paul Babcock was the one who said it, based on his experience.

Here is a link to the section in the interview when he says it: Link

The point is made that it is a matter of using existing laws in a way that normally people don't think of.

Ok... Well I can see this technology being snapped up for energy company's to make more of a profit tbh unless it sold as a device to the public directly

originally posted by: Mary Rose
These two individuals have spoken at what is now called the Energy Science and Technology Conference, where they saw the possibilities for collaboration, which they are now doing.


They spoke and presented jointly at the 2014 conference.

The title: "The Secret of Tesla's Power Magnification."

I haven't seen the presentation.

Here are some notes I gleaned based on the ad for video:

originally posted by: Mary Rose
Here are some notes I gleaned based on the ad for video . . .

I'm confused. The input represents the difference between the energy provided and the energy returned?

I thought it means the energy provided. 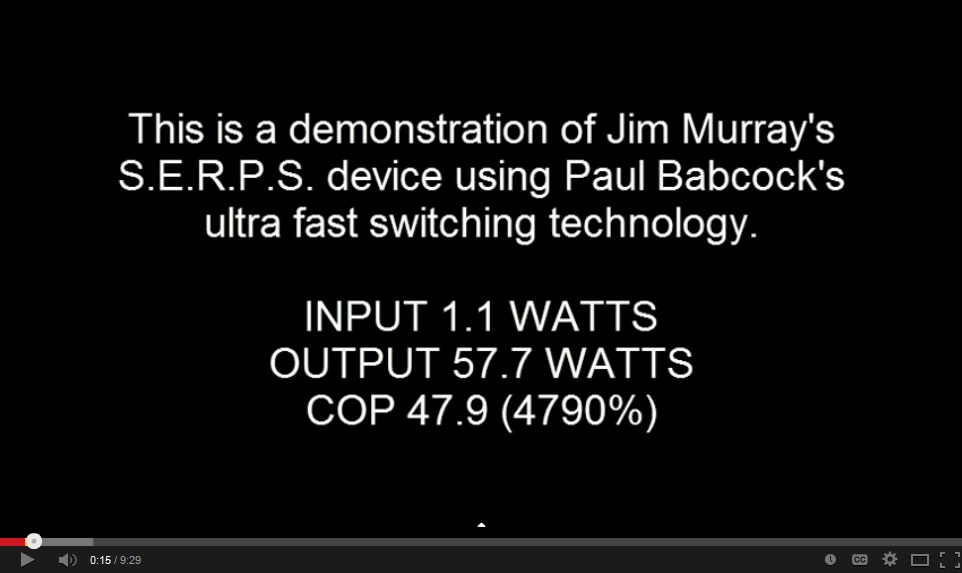 The sound is terrible in that video, but I did hear that there is going to be a jimmurrayscience dot com, so that will be a good source of information about cutting edge technology. Paul Babcock will have a similar website.