The buildings look the same brightness as the stack.

Look again. The one between buildings one and two (on the right) is a white vertical line. The one on the far left (between # three and # four) is barely visible. Then look at the heat gradient on the #1 building on the far right… at the bottom of the building. The other hot stuff in the foreground is all the emergency back up apparatus running on full. The bottom left of pic is the water coolant outflow and it is hot as well.

For comparison look at the terrain in the background… ambient temperature. 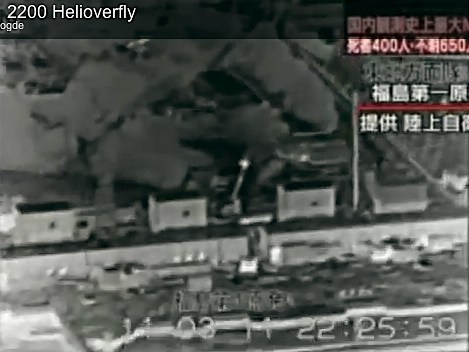 I see what you're saying now.

posted on May, 30 2014 @ 11:20 PM
link
a reply to: BobAthome
It is very dangerous to use a crane to support a structured that is in danger of collapse. Cranes are designed to lift weights slowly and in a very controlled manner you need the correct about of counter weight and other things. If a crane is connected to a mass and collapse initiates the uneven downward and side to side momentum will tear the crane down with it.

No problem. i'd love to show everyone the video made that first night by a news helicopter of the plant in crisis, but this has been removed…

All I have left are the snapshots I took from it. Tepco has been systematically taking down videos that show evidence. Stuff I bookmarked from early on is now gone.

Is THIS the video you talking about?

Showers with stars and applause, you are golden. Thank you, that is the video.

If I may how did you find that? I did searches of the label and key words to no avail.

posted on May, 31 2014 @ 11:08 AM
link
I'm not sure why we're squinting at black and white photos or media reports. The MSM is NOT the source for information on this and most Media reporters wouldn't know a Nuke reactor from a nutter butter bar without a talking head to spoon feed them the contrasts. If we want some base information to work from, I have some to offer and it shows the offending cranes and it shows the offending stacks. In fact, it shows extreme levels of detail all over the Fuku property. Of course, that's the point, too.

A fair amount of these either sourced from or are now held at the TEPCO site. They don't hide a fraction of what folks seem to think they do..although I have 0 question and have written myself on those precious little things they do..forget to explain. Here is one of the TEPCO photo archives though.

posted on Jun, 1 2014 @ 06:33 PM
link
This post serves to remind people that Fukushima is not going away anytime soon.

1. ALPS is, for all intents and purposes, a non-viable solution to Fukushima.....it hasn't worked correctly since the day it was installed, and I doubt that it will ever work as advertised.

5. Emission Stack (subject of thread). This stack is highly radioactive and in danger of collapsing. This could very well cause the evacuation of Fukushima, but it's so far down the list of fubar'd crap that Tepco has to fix that it isnt even funny.

6. Groundwater will remain a long term problem for the foreseeable future.....Yes we all know about the magical ice wall,,,,, but remember,,, ALPS was a magical fix for tainted water too.

7. Hotspots have been found all over Japan....it's insane.... there's a river near Fukushima that has a danger sign posted to warn residents that the radioactivity in the river is too high to be safe.


I could go on and on but I think you get the point.

Emission Stack (subject of thread). This stack is highly radioactive

Groundwater will remain a long term problem ,, the stackes and the pipes underground leading too the stacks ALL HIGHLY radioactive, cause thats where the exhausted fuel pools went,,only not all made it out the stacks,,,

wanna know why the groundwater is radio active,, look at the underground pipes.

posted on Jun, 3 2014 @ 03:16 PM
link
"They are typically constructed of reinforced concrete or brick - See more at: www.abovetopsecret.com...

Dismantling of Stack does not look that complicated, actually.

ps just "opposite click",, and "click" view image ,to get more detail on image.
a reply to: intrptr

Dismantling the emissions stack would be very easy except for one small problem....

At 25 sieverts per hour, a fatal dose would be achieved very quickly. Humans can't get anywhere near it and you definitely need to contain any dust or other materials from escaping while taking it down.

My guess is that they will just leave it until it collapses.... it ranks way below the spent fuel pools and the removal of the missing coriums.

Remember,,, any material at 25 sieverts per hour that gets spread around the immediate area would most likely necessitate the evacuation of workers from the plant. Right now, that 25 sieverts per hour is confined to the inside of the stack. if it gets outside, it could very well be game over or at least a major change in the future of Fukushima.

Evacuation as in can't go back for hundreds of years.

You are talking a fatal dose of radiation in a very very short period of time.

Not your chances of getting cancer or having mutated genes or deformed children..... DEAD....in a very short time.

We are talking about the emissions stack that is behind reactors 1 & 2......

Why, thank you Bob for those pics of the mess. You ask, which stack? All three were used to emergency vent built up pressure within the buildings.

Dismantling of Stack does not look that complicated, actually.


Actually, they are the worst problem associated with decommissioning plants. And thats at working plants that haven't melted down.

Nearly all nuclear installations utilize stacks to discharge ventilation air as well as gases and fumes from contaminated areas. Over a service lifetime that can span decades, stacks may become contaminated as the result of deposition of radioactive substances, such as aerosols on stack surfaces. In the longer term, this is a serious decommissioning issue. This contamination may be difficult to remove, depending on the operating conditions and the chemical–physical environments over time. In addition, the physical logistics of stack dismantling may be complex, for example, the difficulty in severing concrete high above the ground. Relevant aspects include project planning and management, decontamination and dismantling, and the management and disposal of wastes. Although more than 40 previous IAEA reports have been published in the field of decommissioning, none focus on this subject. It can be assumed that generic decontamination and dismantling technologies would also apply to these bulky components, but such an approach disregards a number of specific physical and radiological characteristics that make stack decommissioning a unique project.


Meaning expensive to do right and dangerous if not. At Fuku the stacks were subjected to hi heat rad gas from melting down and maybe damage due to earthquake, Tsunami and decay activity. More boxes from Pandora.