What Takes You Back To "The Good Old Days"?

posted on May, 30 2014 @ 12:19 AM
link
That's pretty much the gist of it... What takes you back to the more simple, innocent times of your childhood? We are always in such a rush to grow up until one day we realize we have hit full blown adulthood. We are thrust into a world where not everything is so safe and cozy anymore. You're not sure who or what you can trust. The wolves are at the door and you're not sure how you're going to keep the mortgage paid for the next 30 days.

You look back and remember the days when you just knew everything would be ok (while your mother/father silently dealt with all of the above). You played hard and you slept even harder knowing that all was well with the world at that moment whether it was in reality or not.

What is it you spent your days doing? What did you rush in to watch on the tv when you could? What hit the market that you just had to have that Christmas? What was the chart topping album/8 track/cassette/CD that you saved your allowance for and then played it a thousand times over?

I am a firm believer that all people think the things in their particular childhood were the best of ALL time simply because when we see them or are reminded of them.... we are subconsciously recalling those safe times, the happy memories, the unadulterated joy that we had when we just didn't know better about much of anything.

I will share some of my memories with you all and hope others will find a small amount of joy at recollecting thier past and sharing their own memories with others here.

I will try to keep it small so others can add on their own...

Who didn't have one of these bad boys? Best fun EVER!

Swatch Watches with the guard of course!

There are so many other things when I start thinking about it. Def Leopard was all the rage. We spent too many hours to count at the skating ring every single weekend. I remember going from my Atari to The NES and being absolutely amazed.

We had Tupperware parties. People fought over Cabbage Patch kids at the stores one Christmas. We had an aluminum Christmas tree that had a color wheel to make it seem like it was changing all sorts of colors.

I remember beta max and snapping into a Slim Jim. You Can't Do That On Television was awesome.

I'm shutting up now, in hopes some of you will join in. I have had a smile on my face the entire time I have been putting this together. Hopefully some of you will have the same experience.

Sorry no pics .. never been one to accumulate things .. always travel light .. only pics ever allowed were military i.d .. driving license and passport .. beyond that I dont do pics ..

Cat Stevens can take me all the way back, nearly to being born, The Cat, the one and only.

Put your feet up and back up a little.

originally posted by: Expat888
Swimming in the river .. sitting out latenight watching the stars .. spent alot of time outdoors growing up ..

Sorry no pics .. never been one to accumulate things .. always travel light .. only pics ever allowed were military i.d .. driving license and passport .. beyond that I dont do pics ..

I'll take it without the pics.

You mentioned swimming in the river. We used to do that as well, now I am surprised at how many parents wouldn't dare let their kids in that "filthy" water and insist on taking them to huge community pools.

Thank you for sharing even without pics. The times... They are constantly changing.

Ah yes... I do like me some Cat Stevens!

I'll see that and raise you some Steppenwolf:

My mom had the biggest crush on JR. And you ALWAYS had to watch Falcon Crest too!

My dad was a lifer in the Marine Corps.. so my good old days was hanging out all over the world with others that had the same. Just like Lee Childs "Jack Reacher", my brother and me adapted to where ever we were stationed and had fun!

We did this until we both had to go in the service..

The best times I remember were a bunch of military brats at the "teen club", in Guam. I got my first .. there lol!!

I could go on but..I'm a bit Mmmmm

posted on May, 30 2014 @ 12:59 AM
link
a reply to: Kangaruex4Ewe
Parents today would cringe at the things we did as kids .. climbing trees .. catching snakes and other critters .. coming home after being out all day covered in dirt .. playing with slingshots .. playing with fireworks - real ones not the wimpy things they call fireworks today .. and we managed it without losing any digits ..

Ahh fireflies fun to catch .. nice thing about living in the country no light pollution so can still see the stars ..

posted on May, 30 2014 @ 01:02 AM
link
Really old fart here,HR Puffinstuff still call evil females to this day witchie poo,the Banana Splits,Motormouse and Autocat,Catch that pigeon,Lancelot Link secret chimp,Roger Ramjet,Rocky and Bullwinke,The Monkees,Captain Scarlet and of course I was a sick unit with a crush on Lady Penelope from the Thunderbirds.

Damn!! Same as me!! My Grand Folks (my Moms parents) had a cabin on the York river, Virginia. My brother and I would go crabbing and bring up buckets of crabs for the adults lol!! Cheap labor! lol!! We'ed get hot dogs lol!!

But, yeah..at night them lighting bugs would come out and ...we'ed get them fireworks hahahah! yep!!

posted on May, 30 2014 @ 01:10 AM
link
I remember as a kid when I could peddle my bike down the road with a .22 over my shoulder, going to pop squirrel and rabbit, and didn't even get a second glance. Then I would bring my sack of game I scored home and watch something along these lines.

I hadn't even hit puberty yet and wanted to bang Erin Gray.

That reminded me of this... 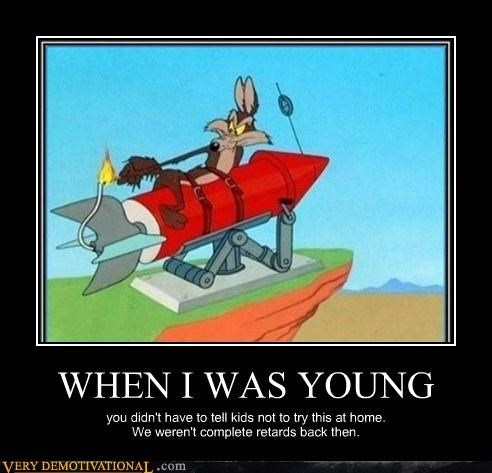 I realize it contains a non PC word that I couldn't edit out on my tablet, but the message is clear. Sometimes I think it's a miracle so many of us actually did survive childhood. But I certainly couldn't imagine it any other way and feel bad for the ones whose parents stifle any and all "free play".

Oh, I loved Rocky and Bullwinkle. I vaguely remember HR Puffinstuff. I watched The Monkees on. Nick at Nite! You have excellent taste!
edit on 5/30/2014 by Kangaruex4Ewe because: (no reason given)

posted on May, 30 2014 @ 01:13 AM
link
Back when cartoons rocked Saturday morning well they just rocked in general: the Snorks, Transformers. GI Joe and who could gorget Grape Ape :-)

Can't forget the song I want My MTV

As children, we would ride in cars with no seat belts or air bags.

Our cots were covered with bright coloured lead-based paint.

We had no childproof lids on medicine bottles, doors, or cupboards, and when we rode our bikes we had no helmets.

We drank water from the garden hose and not from a bottle.

Horrors... staying up late on a Saturday night until 09:30 pm to catch the Twighlight zone

We would spend hours building go-carts out of scraps and then ride down the hill, only to find out we forgot the brakes. After running into the bushes a few times we learned to solve the problem.

Picking off the scabs on your knees and sometimes eating them.

We would leave home in the morning and play all day, as long as we were back when the streetlights came on.

No one was able to reach us all day. No mobile phones. Unthinkable. We got cut and broke bones and broke teeth, and there were no law suits from these accidents.

They were accidents. No one was to blame, but us. Remember accidents?

We had fights and punched each other and got black and blue and learned to get over it. We ate cakes, bread and butter, and drank cordial, but we were never overweight...we were always outside playing.

We shared one drink with four friends, from one bottle and no one died from this.

We did not have Playstations, Nintendo 64, X-Boxes, video games, 65 channels on pay TV, video tape movies, surround sound, personal mobile phones, Personal Computers, Internet chat rooms ... we had friends. We went outside and found them.

We rode bikes or walked to a friend's home and knocked on the door, or rung the bell, or just walked in and talked to them. Imagine such a thing. Without asking a parent! By ourselves! Out there in the cold cruel world! Without a guardian - how did we do it?

We made up games with sticks and tennis balls, and ate worms, and although we were told it would happen, we did not put out very many eyes, nor did the worms live inside us forever.

Footy and netball had tryouts and not everyone made the team. Those who didn't, had to learn to deal with disappointment...

Some students weren't as smart as others so they failed a grade and were held back to repeat the same grade. Tests were not adjusted for any reason.

Our actions were our own. Consequences were expected. No one to hide behind.

The idea of a parent bailing us out if we broke a law was unheard of. They actually sided with the law - imagine that!

This generation has produced some of the best risk-takers and problem solvers and inventors, ever. The past 50 years has been an explosion of innovation and new ideas. We had freedom, failure, success and responsibility, and we learned how to deal with it all.

That old Sid and Marty Kroft stuff was a trip. 'Sigmund and the Seamonsters' was one of my favorites as a kid.

posted on May, 30 2014 @ 01:29 AM
link
I feel sorry for kids these days .. their being cheated out of the fun of childhood ..
Already got a slingshot for grandson going to give him when visit later this year.. still waiting to hear if 3rd son and his wife have a boy or girl to know what to get the grandchild on the way .. figure will try give the grandkids something to remember that was fun when they grow up ..

originally posted by: finitydream
Back when cartoons rocked Saturday morning well they just rocked in general: the Snorks, Transformers. GI Joe and who could gorget Grape Ape :-)

Can't forget the song I want My MTV


Girls Just Want To Have fun was the VERY first cassette I ever owned. I still love Cyndi Lauper and she can still sing just as good as she did then! Parents Just Don't Understand was the first 45 I bought with my own money.

A standing ovation is what you get for that Rodinus! Every bit of that was dead on except for the eating scabs part. I don't recall ever doing that. Now dog food or cat food... What can I say? I had an older brother and a dare was indeed a dare.
edit on 5/30/2014 by Kangaruex4Ewe because: (no reason given)

Your right our parents probably got more out of those shows stoned then what we did as kids,the Banana Splits would be a good trip also.