This day is Ascension Day- or is it?

posted on May, 29 2014 @ 04:40 PM
link
Today is marked as Ascension Day in the church calendar.
It counts as one of the major landmarks of the year.
When I was in primary school (a Church of England school in a very High Church parish); they used to observe the occasion by taking us to a service in the nearby church, and then giving us the rest of the day off.

However, the New Testament gives us two different ways of understanding when “the Ascension” took place.
We can take Luke’s version or we can take John’s version.

The practice of celebrating the Ascension at this time is based upon the account in Acts.
Luke tells how Jesus kept company with the disciples for forty days.
Therefore the calculation of Ascension Day allows exactly forty days from Easter, counting Easter Day itself as the first.
They had been talking on Mt. Olivet; then “as they were looking on, he was lifted up [EPERTHE] and a cloud took him out of their sight.” Acts ch1 v9

In the version of the story at the end of Luke’s gospel, the event seems to take place on Easter Day, soon after his first meeting with the disciples.
Though we could also take Luke ch24 vv44-49 as a brief summary of his discourse over the forty days mentioned in Acts.
He took them out to Bethany, then “he parted from them and was carried up [ANEPHERETO] into heaven”.

However, Luke does not use the word “ascend”.
To be exact, he doesn’t use the Greek word- ANABAINO- which gets translated as “ascend”.
That word is found in John ch20 v17, part of John’s description of a scene on Easter Day.
Jesus warns Mary Magdalene not to embrace him, “for I have not yet ascended to the Father”.
Then he tells her to take a message to the other disciples; “I am ascending to my Father and your Father”.

The implication of this verse is that the Ascension takes place on the same day.

Let’s take first the evidence of his encounter with Thomas, a week later.
Thomas had said that he would not believe in the Resurrection unless he was able to touch the marks in the body of Jesus.
Therefore Jesus challenged him and invited him to make the test.
There’s no suggestion that Thomas really took up this offer, but the invitation was there all the same.
Now Mary Magdalen had been forbidden to do this.
Even though “Do not touch me” is sometimes translated as “Do not cling to me”, it isn’t easy to see any real difference between what was being offered to Thomas and what was denied to Mary.
The most natural explanation is that the circumstances had changed.
When Jesus spoke to Mary, the Ascension was “not yet”.
Whereas when Jesus spoke to Thomas, the Ascension was a completed event, so the objection no longer applied.

The next piece of evidence is the wording of the message to the disciples.
“I am ascending” is in the present tense, not the future tense.
It implies that the event is imminent, perhaps even beginning already.

But the most telling point is the very fact that the message was sent at all.
Jesus would be meeting the rest of his disciples in the evening.
Therefore there was no need to send them a message about “ascending to the Father” unless the event was taking place in the interval.
If he was expecting to ascend at a later time, he could have told them so himself, when he saw them.
The conclusion must be that the meeting with Mary Magdalen was even more unique than we thought.
It wasn’t just the first of the “Resurrection appearances” of Jesus; it was also the only Resurrection appearance to take place before the Ascension.
All the others were temporary “descents” (or self-projections) and re-ascents.

This conclusion supplies an answer to the question which used to puzzle me about Luke’s version of the timetable;
Where exactly was Jesus supposed to be located between Resurrection appearances?
The puzzle is resolved if he was making a fresh descent each time from his place with his Father.

That explanation also fits the way that he makes his appearance.
Although the common statement is that the risen Jesus “walks through walls”, nothing in the gospels shows him doing anything of the kind.
He arrives suddenly. One moment the disciples are on their own; the next instant, he stands amongst them.
He departs suddenly. One moment he’s in their company; the next instant, he has gone.
It seems that his arrival comes direct from another place.
One might almost say that he “beams down”, like the crew of Star Trek, or “materialises”, like the Tardis, and returns in the same way.

The scene found in Acts, then, is less “the Ascension”, as a unique event, than the last of the re-ascensions.
The episode is taking place to make the point that this phase of the church’s life is coming to an end. There will be no more “Resurrection appearances”.
Paul thought his experience was a late exception (“last of all”), but he regarded it as an unusual and undeserved privilege.

The first account of the Ascension found in the Bible is in the Gospel of Mark (16:14-19). The description is brief. Jesus and the remaining eleven disciples are seated at a table, presumably in a room in or near Jerusalem. Jesus commands his followers to spread the Gospel, and that those who believe will be known by their invulnerability to poison, ability to heal the sick, and the like. After delivering these final words, Jesus is received into heaven to sit at the right hand of God. No description of the Ascension itself is given; Mark simply states that it happened.

The Gospel of Luke is even more brief in its description (24:50-51). Jesus led the eleven to Bethany, not far from Jerusalem. While in the act of blessing them, Jesus was carried up to heaven.

The third, and most celebrated, account of the Ascension is in the Acts of the Apostles (1:9-12). For forty days after the Resurrection, Jesus continued to preach the Gospel. Jesus and the eleven were gathered near Mt. Olivet (or the Mount of Olives), to the northeast of Bethany. Jesus tells his disciples that they will receive the power of the Holy Spirit and that they will spread his message the world over. Jesus is taken up and received by a cloud. Some traditions say that he was taken up in a fiery chariot, much like the Prophet Elijah. Two men clothed in white appear and tell the disciples that Jesus will return in the same manner as he was taken. They say: "Ye men of Galilee, why stand ye gazing up into Heaven? This same Jesus, Who is taken up from you into Heaven, shall so come in like manner as ye have seen Him go into Heaven" (Acts 1:11).[1] Afterwards, the disciples return to Jerusalem rejoicing, remaining continually in the Temple.

The Gospel of Matthew ends at a mountain in Galilee, with Jesus commanding the disciples to spread the Gospel. No mention of the Ascension is made. 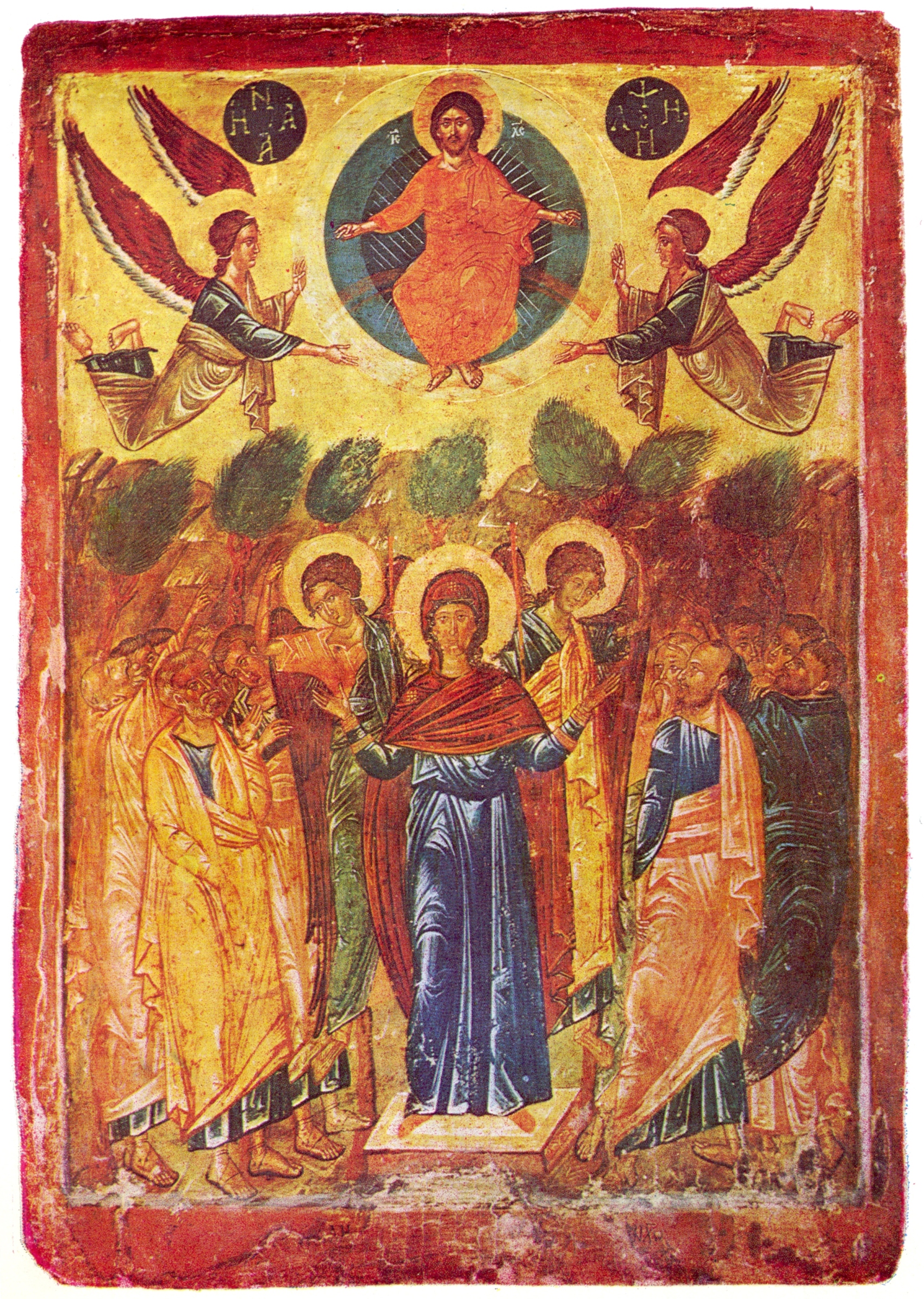 posted on May, 29 2014 @ 04:57 PM
link
a reply to: godlover25
And of course the significance of the Ascension is the teaching that Christ now "sits at the right hand of his Father", sharing his reign.
(That will have to be a thread, another year)

Of course it is!

Our Tradition says the Apostle and Evangelist St. Luke was the first Christian Iconographer,

I agree with your op for the most part. I always viewed the ascension that occured 10 days before Pentacost to be the final ascension before Jesus was seated at the right hand of the Father. As you stated this is more of a dispensational change than an "ascension day".

However, I dont think today is Ascension Day. Based on my understanding of the OT, the Paleo-Hebrew calendar was Solar, rather than Luni-solar. The Luni-solar rabbinical calendar that exists today was most likely a result of Babylonian influence during captivity, in my opinion. That places Ascension Day annually on May 17th gived that the Vernal Equinox occurs on the afternoon of March 20th.
edit on 29-5-2014 by BELIEVERpriest because: typo

However, we ought not worry ourselves over such things as we are not to give power to symbols or idolatry but to the true one.

This might be useful: The Biblical Expression “40 Days and 40 Nights” Just Means a “Really Long Time”

I have a traditional Catholic friend who ranted about today being the day of Ascension and being angry that most US dioceses move it to Sunday. I didn't bother noting that we don't really know when that happened, as it would likely just make him madder, lol.

PS Thank you for that link, because the symbolism suggested for 40 is very relevant to the period at the beginning of Acts.
40 as representing a time of probation. Possibly related to "grace" and preceding a time of judgement.

Yeah, really didn't matter to me.

Sometimes when I deal with these radical Catholic traditionalists, I wish that there was a legitimate Anglican church here in the United States -- they're usually a lot better aligned with me, but the American Episcopal church has fallen into apostasy, in my opinion, so I'm left with Catholic or Eastern Orthodox, and there is no Orthodox church local to me.

posted on May, 30 2014 @ 12:45 AM
link
a reply to: Sump3
Thank you. I wasn't very worried about it, but I do think John's version gives us a better understanding of the "reign of Jesus" as a consequence of the Resurrection.

posted on May, 30 2014 @ 06:26 PM
link
a reply to: guidetube
It implies, as the rest of the New Testament teaches (e.g. Hebrews ch1 v3) that he has now returned to his Father, sharing his Father's "throne" (e.g. Revelation ch3 v21).
So, yes, it's part of the reason why the church understands him as Lord and expects him to return in power, as the gospel predicts.