Texas Restaurant Bans Gay Couple Because ‘We Do Not Like Fags’

posted on May, 29 2014 @ 03:18 PM
link
'Big Earls" restaurant in Pittsburgh Texas banned a gay couple from ever returning to eat there because they "only serve men who act like men".

The server "Big Earls daughter" cited a sign on the door saying that the establishment reserves “the right to refuse service to anyone,” prohibits “baggy pants,” and requires that “men act like men and women act like ladies. 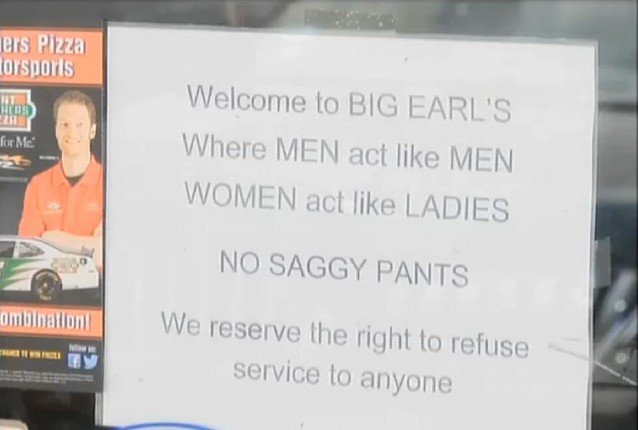 Big Earl says blacks, hispanics and homosexuals are all welcome to eat there saying the public display of affection "rubbing legs together" got them banned.

My goodness, does anyone read or study? Big Earl has spent his life in the military to defend this country and will be happy to explain the constitution to you. Earl is well versed in the Bible and Christianity, has travelled the world and is well educated. It would have been nice for the full interview to have played in order to explain the background to what caused the incidence. The quote “we don’t serve fags here” was never said, instead, after being badgered, the young lady said “We do not like fags”. The behavior portrayed by the young couple was simply inappropriate and would have been considered so no matter what sexual orientation.

Personally I don't get it, I know you can reserve the right to serve whoever you want but being a business owner myself I feel like gay peoples money is just as good as anyone else's.

And anyone that spends money in your establishment is a good customer and should be treated with respect.

The bible is the problem imo. It tells him how to live his life and he can not go against that

The Justice Department better get it's butt to Texas RIGHT NOW and kill arrest or imprison these people!!!!

They must be tea bag people or Christians or gun owners or white folks or republicans or racists or haters of Obama or . . . . . . .

Grimpachi
+26 more
posted on May, 29 2014 @ 03:33 PM
link
Look I am all for everyone being treated equally and according to Earls they would have kicked any couple out for those actions. That is equality,no.

It seems to me the couple was flaunting or being borderline lewd in the restaurant. They were banned for their actions not their sexual orientation.

I have no doubt the owner or staff do not like homosexuals, but they are free to feel they way they do in this country. You can't regulate peoples thoughts.

IMO no ones rights were trampled in this case. If they were I would have no problem saying so.
edit on 29-5-2014 by Grimpachi because: (no reason given)


Sorry there are just too many things that can stand for, for me to respond to.

Personally I don't get it, I know you can reserve the right to serve whoever you want

Oh no you can't. You can for certain reasons, but not just because you don't like someone due to the following: race, gender, age, handicap, religious affiliation, etc. There are specific Federal laws which prevent a business owner from telling a black man that they don't want his kind in there.

In the internet age, people can destroy a business in days. Some people are just too stupid to realize that, and let prejudices dictate their words and actions rather than common sense.

posted on May, 29 2014 @ 03:39 PM
link
Texas law allows this type of discrimination. They can refuse service because someone is gay. Or even disabled.

The Texas Education Code and Government Code do not mention discrimination. Nor does Texas have a state law prohibiting discrimination, including disability-based discrimination, by public accommodations – as do the federal laws discussed in the Know Your Rights brochure.

If the owner doesn't like gays, that's his choice wether others like it or not. I don't see why this is news worry.

Yeah money is money, so taking it from a pedophile who rapes little boys doesn't bother you?? There lies the real question on societies lines on what's right or wrong.

This is my favorite part:

The quote “we don’t serve fags here” was never said, instead, after being badgered, the young lady said “We do not like fags”.

LOL, like the second statement is so much better.

Are we sure this isn't from the Onion???


Some people are ignorant and closed minded...if you aren't exactly like them then you are "bad". Luckily, the younger generation seems to be evolving and not thinking like this as much.

It's outdated thinking, being scared or afraid of anyone who is different. It will only end when the older generations die out...and we probably have another good 3-4 generations to go before it is gone.

originally posted by: FlyersFan
Well ... they can serve/not serve whoever they want.
And people can boycott the place if they want.

I hate to bring up old topics...but aren't they having a "private" moment at their table???

If conversations are private at restaurant tables, shouldn't all actions be considered private? Some might ask....why are you looking and invading their privacy?

Here is the part that makes me believe there is more to the story than just "rubbing legs".


It would have been nice for the full interview to have played in order to explain the background to what caused the incidence. - See more at: www.abovetopsecret.com...

If it is just rubbing legs then a strait couple should go in and do the same to see if they get the same treatment and if they do then there is no case for discrimination.

OK thanks. I thought that may be it, but I googled the acronym and a lot of things came up. Some were pretty bad.
edit on 29-5-2014 by Grimpachi because: (no reason given)

posted on May, 29 2014 @ 03:49 PM
link
Actually, it's only in a few major cities in Texas where they have protections in place that would help. This isn't one of those cities apparently. Not that it will matter though because Big Earl I think just slit his own wrists on this one.

I find it interesting that they waited until these guys ate, paid and were on their way out before saying anything to them. Guess they got to get them dollars from them first. Money before principles and all. Or just your basic "chickensh*t" way to address the situation IMO.

They also say they were sitting across from each other but one had their leg up on the others lap. Yet I guess to Big Earl that was just way too gay for him to handle with any kind of normal reaction. Him or is Daughter. That is Earls claim anyway, which is a pretty sad ass claim IMO. We may never know for sure however because when asked to view the security footage Earl refused. Can't imagine why....

originally posted by: kruphix
I hate to bring up old topics...but aren't they having a "private" moment at their table???

Sure. Private moment. No problem. I'm just saying I don't like public displays of affection ... no matter who is doing it. I wouldn't complain about it to management .... I'm just say'n I don't like it. Maybe others didn't like it and complained. I have no idea if that's what happened .... just speculation.