I'm no specialist in laws about gun's around here, neither there.

Here is illegal to have, what the Santa Barbara shooter had on him. A Glock 34 and two Sig P226 pistols. That he purchased them legally last year along with 400 rounds for the 3 guns and His magazines were all California legal and capped at 10 rounds and that All guns and ammo were 9mm.

Here's a radical idea. Since you obviously have Internet access look stuff up rather than make # up:

Licensing requests for guns have increased by 20 percent in Portugal in the past year, with the number of establishments selling firearms also increasing by 10 percent.

Q: How many firearms are there in Portugal?

We believe there are close to 2.6 million firearms in civilian hands.

Looks like you have a problem with 'illegal' guns too. Gee, but your laws are so strict and awesome and make your county a wonderland of safety?


According to the Weapons and Explosives Department there are currently 2.6 million firearms in civilian possession, 1.4 million being legal and 1.2 million illegal. Shotguns are the most sought after weapons, representing 57 percent of all purchases, with Portuguese also importing pistols (25 percent of all imported weapons) and rifles (10 percent). The biggest exporting countries sending weapons to Portugal are Germany, Belgium, Brazil, Spain, USA, Italy and Turkey.

Wait a minute. All those supplier countries have strict laws too. Hmm... It's as if the laws arent being followed. Crazy, right? And if a gun can get from the USA to Portugal what makes you think anything can stop somebody who wants one from getting one?

Why don't you worry about your own backyard before nosing over into mine?

Oh, that's right. Because you're ignorant of the world around you.

Here's a neat video of 9mm semi auto handguns being fired in Portugal:

Looks like you can get them if you sport shoot with a club. But you said they were illegal?

This type of nonsense gets me really fired up. You don't seem to know jack about your own country but you have so many opinions about ours. Does your media just play American news all day?

Here's some gun shops in Portugal:
www.fptac.pt...
www.espingardarianoa.com...
edit on 30-5-2014 by thisguyrighthere because: (no reason given)


But yet guns are not the problem.

The most truthful thing you have stated thus far.

Gun's are used for MASS MURDER by lunatics. A guy w/ a knife can't do that trick, ppl can defend themselves against that. Ppl can't defend against BULLETS.

A couple good sets of throwing knives, a kukri or machete, maybe a tomahawk or two and I could put any mass shooting to shame. Not that I would, mind you. Anybody with enough training and practice with bladed weapons can be just as deadly, if not more so, as any shooter. That is unless someone with a gun shows up to stop the rampage.

I think a lot of people have this idea that guns are the main killing weapons in this country when that is just not the case. It is much easier and discrete to use poison if you want to kill someone. Untraceable in many cases and causes more pain and suffering than a bullet to the head.

originally posted by: Kandinsky
According to the FBI stats, between 8550 and 9528 murders were attributed to firearms in the years 2008-2012. 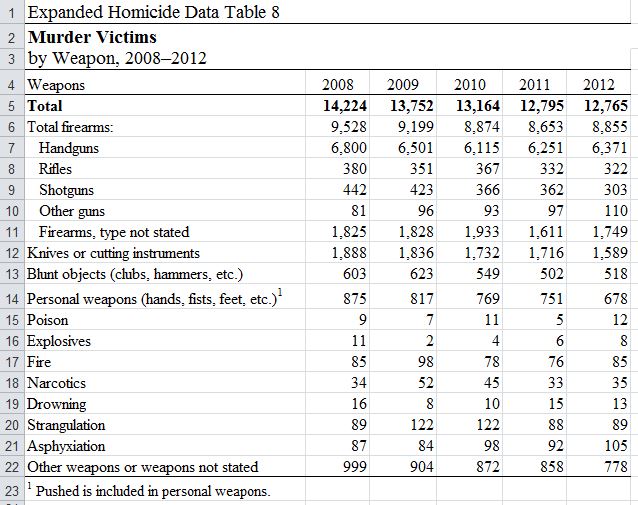 
In looking at the numbers, really LOOK AT THE NUMBERS, You will see 1800 murders or so are done with firearms that are unspecified. SO many of the repliers fail to see that this exceeds all of the numbers for which they feel are conclusive proof of whatever point that they WANT to make.

The other catch-all on the non-firearms segment lends me to doubt the worth of this list. The combined total is about 2500 deaths/yr by ???. That's around 20%. These must be unsolved crimes. Twenty percent of the murders have no solution.

The only item that stands out is that the rate of murder seems to be declining but not so much for hand guns, rifles, 'other guns' and the unknown pool of firearms. Which means that the use of guns to murder people is becoming a greater proportion of the preferred means to kill.

I am not anti-gun. I am anti-murder. With half of all murders committed by hand guns, what recommendations do you have that can lower this cause of death?

My own is to lessen the power of narco-gangs through killing the Drug War. Another is to talk to the producers of BS 'gangsta' stars and the dreck that they press upon the kids. Knock out games, shooting someone to prove you can hang, demeaning women, GROSS displays of money/toys, 'bringing the rain', etc. only exacerbates the insanity of being poor, helpless and hopeless. The only way to achieve the status of those 'stars' is to whore or sell drugs. Either of which puts you into play for reply by gunfire.

Someone needs to put a magnum of Cristal upside their heads.

How about studying the data until you know how the other murders were committed.

originally posted by: largo
Someone needs to put a magnum of Cristal upside their heads.

May I remove the contents prior to doing so? Would be a waste of good hooch.

Great research, although you missed some pretty important stuff.

If you want to find a country with the same firearms homicide rate as the US, you have to go to the third world. None of the developed nations have anything like the same kind of problem.

At a tangent, Portugal was a dictatorship until, IIRC, 1974. A dictatorship which, like Franco's and Saddam's, did not disarm its population.

I wasnt trying to compare homicide rates. I just wanted to point out that Portugal isnt the gun-free utopia he claims it to be and that most of his claims about what is or is not available were fabrications.

Simple rates are too complex. An infinite number of factors are involved. Criminologists make their entire careers on trying to map them all and still fail to get anywhere.

ETA: What I found funny in looking at those sources and others is that most outlets and reporters seem to believe that Portugal has serious gun problems. So even with all their laws and all the restrictions the anti-gun segment is still working from the same position that America's anti-gun segment is. Specifically, one gun is too many. Therefore they will never be satisfied and no amount of capitulation or caving to the ever popular 'common sense' meme will ever be enough.
edit on 30-5-2014 by thisguyrighthere because: (no reason given)


They must have 2 and a half times more lunatics over there.... going by what voyger2 says.

posted on Jun, 1 2014 @ 04:25 PM
link
Yah, what people don't understand is this-handguns are very very loud weapons, so are rifles. Hammers, especially ballpoint hammers are silent when swung, semi silent when they crunch into a skull or neck, and often have much more accuracy. It's a good thing that people use guns when going on rampages, as they would kill more people with hammers if they just snuck up behind unsuspecting folk and swung, then dragged their body off in the bushes, then finished the job and moved on.

Then again, if we take everyone's guns away, then more people will use hammers to kill, and the number will go up. Hammers are much easier to wield anyways than guns. Also ballpoint hammers are easy to clean, difficult to track down who was using them, and the hammer man can go on long drawn out killing sprees, over several months as long as long as he wears a mask. I think there was once a serial killer who preferred the ballpoint hammer in England but I can't remember who it was off the top of my head.

Some ukrainian crazies who killed people with hammer and screwdriver.

I don't think that the government wants to take away peoples guns. They know theyll switch to hammers.

originally posted by: macman
a reply to: voyger2

Clearly you don't get it.

Please, go and research the Oklahoma bombing, Jonestown, 911, China's gassing of the subway stations and so on.

Firearms are not the problem. Never have been.


I also think what's missed by anti 2nd amendment knuckleheads is almost all serial killers never use guns. Jeffery Dahmer, John Wayne Gacy, etc. there is a long list even couples that were serial killers that didn't need guns. Yet they killed many many people. Dahmer got 17 before he ate them and got caught.

It has become painfully obvious we have to first register all serial killers, limit the amount of people they can kill, then discuss a plan to confiscate them. At least for the safety of the public.

You are right on Macman

Great research, although you missed some pretty important stuff.

If you want to find a country with the same firearms homicide rate as the US, you have to go to the third world. None of the developed nations have anything like the same kind of problem.

At a tangent, Portugal was a dictatorship until, IIRC, 1974. A dictatorship which, like Franco's and Saddam's, did not disarm its population.


Interesting you're neglecting to mention Portugal population is only 10M and the US is 350 million. The number of guns in the US is about 340M which really makes your number really .000025. In portugal it's 188 or .000018. But the interesting fact is the number of guns in each country the US has 130 times the amount of guns as Portugal, and yet a marginal difference in murders.


Cars and posion bet all firearms deaths per the CDC

US #1 in Gunownership BUT 28th in Gun Deaths. Even Switzerland is higher up the list the the US.