Do you see the problem there? FREE GUN'S. Anyone can get one, of course if isn't mental ill, i can't correct? Maybe he can borrow one from his friend, there are are so many GUN's 1.05 per capita is it? like more than 300 million guns... Time to end this madness.


The mass shootings in a given year, tragic and sad as they are, are a statistical drop in the bucket. If you really care about getting a handle on firearm crime, I suggest you look at fixing the systematically dismantled black family. Every people in the US that has been welfare--ized by liberal policy has been obliterated. Just look at black and native populations. Their societies have been absolutely annihilated by being turned into welfare societies. It makes one wonder if liberals are the true racists.

All good points to make. Politicians and the media continually attack law abiding citizens rights instead of tackling the harder issues of entrenched and institutionalized poverty. Stemming from the artificially managed cesspool of violence comes a professional or permanent violent criminal underclass who keeps getting put back onto our streets time after time.

Which just feeds the frenzy of the false target of legitimate gun owners and specifically owners of modern semi-auto rifles and shotguns.

I would suggest those long guns do scare both the liberal and the politician because one day those legitimate owners may decide to overturn things just as our forefathers did with the crown, for that reason and that reason alone I believe the unwarranted attention is being focused on the wrong issue by those with a vested interest in the way things are.

The problem in that stick in the sand attitude, is this: YOU COULD BE THE NEXT VICTIM AS YOUR CHILDREN.

With a .6 homicide by gun rate if you remove the gang affiliated murders. So lets break down the remaining ~2000. Did you know ~1000 of those is a combination of people and police legitimately defending their lives from death.

So... if you're not gang affiliated (choice), your chances of getting killed in the US as a result of a firearm is actually lower than in your country of Portugal...

The question any reasonable person should draw form this is: "what is the big driver of social violence, is it the prevalence of weapons or some other factor? because the prevalence of firearms doesn't correlate very strongly."

The problem in that stick in the sand attitude, is this: YOU COULD BE THE NEXT VICTIM AS YOUR CHILDREN.


In case you haven't been paying attention me or my children are far more likely to die in a wreck on the way to school or even in a falling elevator or drowning in the tub than by some random nut shooting people.

Or have you not been paying attention?

Do you seriously fear things that are statistically never going to happen to you?

The chances of any particular K-12 school in the United States experiencing a shooting incident in any given year is approximately 1 in 53,925.

If you're still worried about it you might need therapy.

That source is actually pro-gun control by the way. Just thought I'd mention it.
edit on 30-5-2014 by thisguyrighthere because: (no reason given)

the use of SLAVERY was a sacred right for white people. NOW IT ISN'T.

APARTIDE and RACISM was a sacred right for white people. NOW IT ISNT.

GUNS ARE FREE. THEY SHOULD'T BE.

I have about the same chance of being killed in my country by a firearm as you do in yours. I am not gang affiliated, and I am not a criminal. YOU COULD BE THE NEXT VICTIM AS YOUR CHILDREN! 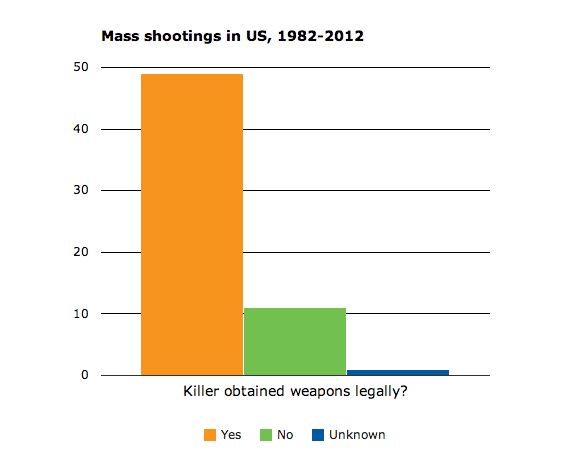 a reply to: macman
if you don't consider legal firearms, yes they weren't.

I am not inclined to give up my Constitutional rights nor any of the millions of other law abiding gun owners because 48 crazy drug addled perpetrators idiotically chose to do what they did.

Be like banning automobiles for the few crazies that drive them into crowds or banning hammers because they cause more death than long guns.

Ever notice how those same crazy perpetrators sanely decide to do mass shootings in predominantly "gun free" zones? Ever notice when one of these crazies is challenged by a citizen lawfully carrying that they more often shoot themselves dead.

On many of these crazies its been demonstrated that they indeed did violate federal law by lying on their form 4473 so your chart is not accurate.

Hey now, don't be muddling the argument with other relevant statistics and facts. Just choke on the one bar chart that makes his point sound relevant, like a good sheep.

Do I see Paranoia here.? I speak only my opinion. What I feel is the Truth.

What I feel is the Truth.


Ranks right up there with "widely believed fact."

In other words: of no value.

Read a history book. I have seldom encountered such lack of knowledge, reasonable discourse, and self realization as in your posts.

People die every where.I will die, just as you. I don't get it.

But there are People that die in the hands of LUNATICS WITH ACCESS TO FREE GUNS.

EDIT: don't TROLL on me.


Wait, where are these "free guns" and where does the line start??

Dude, just noticed you are in Portugal. Don't you guys have enough of your own problems to deal with, instead of trying, poorly at that, to instruct others how to live within OUR country???

I'm a good ol boy from Texas who served honorably in the Marine Corps. I love me some guns and know they're just a tool and not the problem. However, as you may have seen, someone tried to use the non-point I made seriously. MrInquisitive done did it.

originally posted by: voyger2
a reply to: Galvatron

Do you see the problem there? FREE GUN'S. Anyone can get one, of course if isn't mental ill, i can't correct? Maybe he can borrow one from his friend, there are are so many GUN's 1.05 per capita is it? like more than 300 million guns... Time to end this madness.

We haves laws against that very thing hence my point about the hysterical cry for more coming from the left - I think all of this is a red herring as most know the true agenda of gun control - a docile subservient population easily controlled.

originally posted by: Galvatron
The question any reasonable person should draw form this is: "what is the big driver of social violence, is it the prevalence of weapons or some other factor? ."

There are lot's of different kind's of violence, that should be eradicated w/ love, tolerance and respect to others.

Yet, one of the main cause of Violence, is FEAR. Fear from others, fear from government, insecurity in general. Bottom line fear of death ( this would give another thread).

And ppl believe they can't fight Fear and insecurity with guns. But in the end, that's totally the opposite. They will attract more Fear and death for there lives and others around.

And by making gun's free, you are giving weapons of mass murder to more that 300 million ppl. The outcome of this isn't good. Living permanently in a state of war and mistrust. 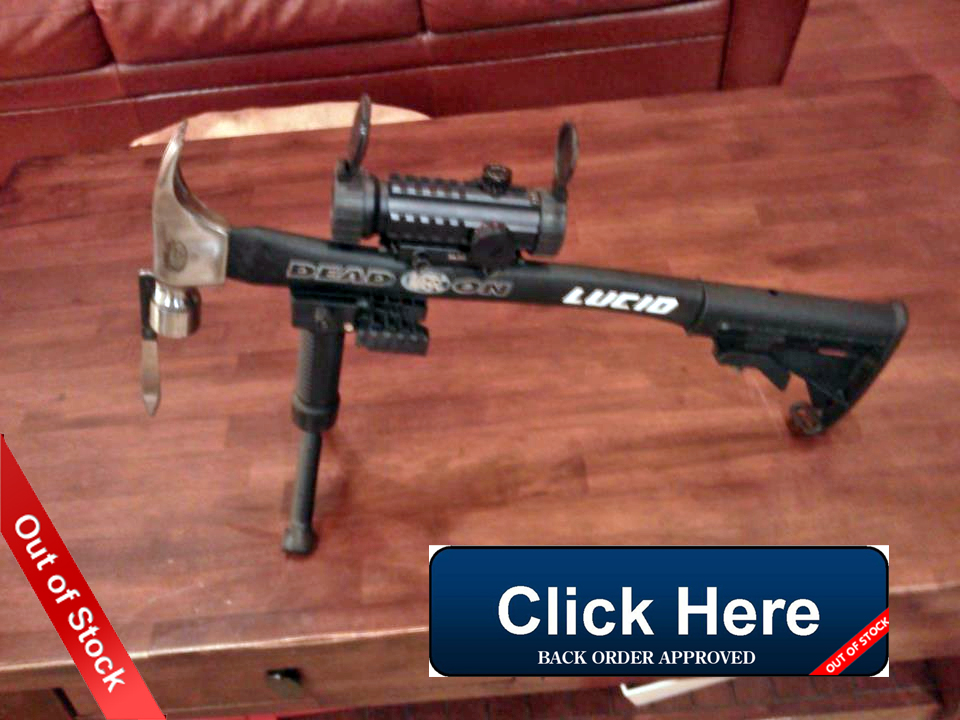 It is interesting that if you take guns out of the equation the murder rate in the US is double that of the UK, with a higher rate of people killed by knives. That's an interesting myth buster!

In context though. The US is still a peaceful place guns, or no guns.

I'm paying attention, I could suggest the same for you.

Again there's lots of ways to die. Tobacco, cancer, drunk drivers, falling on the street, peanuts... lot's of them. They can produce more causality the Guns.

But GUNS ARE USED FOR MASS MURDER. the others: Tobacco, cancer, drunk drivers, falling on the street, peanuts AREN'
T.

originally posted by: voyger2
But GUNS ARE USED FOR MASS MURDER. the others: Tobacco, cancer, drunk drivers, falling on the street, peanuts AREN'
T.

So it's just this one exceedingly rare event that bothers you?

That's a fixation. An unhealthy one at that.

You are frightened... I am not. What you feel isn't want everyone else feels and neither is it what they should feel.

You are sorely uninformed and very emotional. There is very interesting evidence that supports the notion that the prevalence of firearms in the US prevent more violence than they create.

I don't lack the grace to tell another country what's what. What if I started telling you about your drug abuse rates in Portugal. That's for you to sort out your way.