If Obama Is Actually Coming For Your Guns, He's Really Terrible At It. 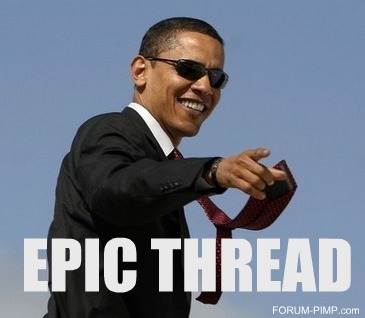 ... and yes, he has shown a consistent pattern of being the herald after our money.


Sorry just wanted to learn more about American Gun culture as for things like 'No Guns/Yes Guns' I can't really give any standpoint as for me its irrelevent in my culture/country.

WHAT? Guns are irrelevant in your culture/country? How are you still alive and not the victim of constant crime? The "guns are the greatest thing in the world" crowd in America keep telling me life itself is impossible without an aresnal strapped to your side at all times!

sarcasm over. I own a gun so I get to poke fun. That said, I own one gun, and I have no idea if I have any ammo for it or not. It's in a box in the office closet...

posted on May, 29 2014 @ 12:12 PM
link
a reply to: nighthawk1954
He's actually been attacking it at a different level. Ammunition plants and restrictions on lead use.

I honestly dont think attacking guns is his active agenda, but it is part of his agenda. Right now he seems more focused on militarism the police ans all govt agencies.

There are over 100 million gun owners who collectively sport over 300 million firearms (by numerous sources to quote). We are a nation literally built on, around and with the gun as a means of personal determination of fate and symbol of independence in a wild world.

He could never...ever...in a million wet dreams and fantasies..outright take our guns. We need to be MADE to think like we WANT that to happen. Like we NEED that to happen for our very safety and the fabric of society. In short. We need brainwashed, not bum rushed and they understand that very well.

It is a marathon, not a sprint...and we aren't but half way there to getting past some busy body saying what we have by the rights given us as men and women isn't 'proper'. They're playing a long long game...and that's how it looks when they are playing to win, not posture, IMO.
edit on 5/29/2014 by Wrabbit2000 because: (no reason given)

0bama has not gotten much done when it comes to actual Bills. He has done it all through Govt Fiat, policies, the DOJ and the BATF.

Why does he need to work to pass laws, when he can go around the legal process and push Govt Agency Policy.


Do you want to make excuses for or white wash any other actions of the Govt?

posted on May, 29 2014 @ 02:23 PM
link
obama doesn't plan to 'take our guns', and never has. The controllers he takes orders from are still on a slow track to eliminate gun ownership, and are gently leading us in the direction they want us to go.
A good portion of today's youth are being born and raised in cities where gun CRIME is an issue. The next generation won't be so dogmatic about keeping their guns, and their kids? TPTB seem to enjoy the 'game' of manipulating minds as much as the outcome.

I can see an event like Katrina, but much more epic proportions, as the catalyst for fast-tracking gun confiscation. In a major city of a million people, a natural disaster that cut the supply chain- disrupted the water supply, brought down the power grid- rioting would begin in hours. It would take military intervention to sop the mayhem, and of course EVERYBODY would need to be disarmed.
Once you guns are gone, for 'public safety', you won't be getting them back. There'd be too much politicking going on, and you'd die of old age before getting through the legal system. Or, go broke trying.

If the 'Big One' hit Cali or Seattle, it would be fortuitous for TPTB. Send in all resources (military) to 'help', and pull the fire brigades from the multitude of fires the drought-stricken west is being plagued with, confine people to towns by the fires raging around them, and you are half way done disarming America!

There's not a limit on how much .22 ammo you can buy where you live? You close to WV?

posted on May, 29 2014 @ 11:38 PM
link
Republicans claimed Obama was coming for their guns, and they have more than ever, they claimed he was bringing back the fairness doctrine but no bill was ever written, they claimed he was destroying capitalism, but the capitalists have record profits...

There is a pattern here, basically everything conservatives say is bogus.

Maybe I am just special but .22 hasnt been too hard to find recently. Also id by "assault rifle ammo" you happen to mean 5.56, .223 or 7.62x39 then ypur answer is bad. None of those is hard to find at the moment. I can walk into walmart and buy as much as I want. I never saw a decline in the assault rifle calibers. I had trouble finding .22 lr a while back but now I can find it if I try.

In my area, that's mostly due to demand. The prices seem to have leveled off quite a bit.

There's trouble at my Wal-Mart and everywhere else I looked. The prices are also insane. Only two boxes of .22 ammo per customer and it's been that way for a while now. Oh, and I meant 7.62 x 39, but I don't need any of it, but last year I had trouble finding it.

Ah, I see. I didn't know if it had to do with demand or what, but in my mind I would think there would be plenty enough .22 ammo to go around. -Here I was blaming "that damn Obama". hahalol

Watching some of you guys fret over what must be slowest, most rubbish coup in history would be funny if there weren't so many dead bodies.

You keep your bang-bang toys, we'll keep our peace of mind and kids' safety.

originally posted by: Whodathunkdatcheese
a reply to: nighthawk1954

Watching some of you guys fret over what must be slowest, most rubbish coup in history would be funny if there weren't so many dead bodies.

You keep your bang-bang toys, we'll keep our peace of mind and kids' safety.

I just watched a mother jones video on utube (uploaded 1 day ago, 700,000 views, "gun activist harass marine veteran") and have been reading the comments. The gun grabbers are ranting, and marines are showing up saying "he's not a marine" but no one is leaking any agenda except the grabbers. The word bully keeps coming up which I think is being taught in the schools right now and is a current talking point.

As to international image, one person posted "I'm not too familiar with gun laws in the USA, but you can just walk around with riffles like that?"

Not, "how can I learn more about this bullying problem so I can join the fight" not at all. No one is saying that, but "you can walk around with a gun in America!?"

Well there's plenty of things to hang on his doorknob... God knows.

But in this particular instance, nope. Not so far as I can tell.

If Obama Is Actually Coming For Your Guns, He's Really Terrible At It.


Obviously it's not for lack of trying. He doesn't bust down doors (yet). He uses his minions in other nefarious ways to try to break down 2nd Amendment rights.

posted on May, 31 2014 @ 06:54 PM
link
No. Obama is not coming for anything. Obama is just a step on the path. Because these people don't do anything like this out in the open. They use the boiling frog method. Remember? They've got it all figured out. They know people won't pay any attention if they do it progressively.

And in fact, the so called conservatives are actually part of the plan.
edit on 31-5-2014 by BrianFlanders because: (no reason given)

posted on Jun, 2 2014 @ 08:13 AM
link
He's not after people's guns. What he's after is chaos, keep the pro-guns hating the anti-guns & vice versa. So when something is to happen you all won't notice & if you do you'll blame the other side not the government.

Very good strategy if you ask me.

The best keep secrets are the ones that every bodies heard but no one believes.