MH370. They've been looking in the wrong place, seriously. Can this really get any more absurd.

I do agree, there are too many possibilities and that certainly does stifle discussion. To quote the computer from the movie Sunshine "variables are infinite and not open to useful speculation".

posted on May, 31 2014 @ 04:37 AM
link
a reply to: ProphetZoroaster
Google earth images can be several years old. Was the image over cambodia taken after M370 disappeared?

I would be willing to bet there have been no Google satellite images taken for a while of that area, after all why waste resources photographing something that does not change.....unlike city areas.

Yeah.. maybe they should make the "pings" a little more unique so they arent mistaking them for submarine casserole timers and whale jewelry.
edit on 31-5-2014 by GogoVicMorrow because: (no reason given)

You are quite correct. Google Earth images are what they are, you need to be sure of the currency of the image, generally, as far as I'm aware, they do publish the source and date of the imagery on the center bottom of the respective tile.

posted on May, 31 2014 @ 04:48 AM
link
It was a heist by the pilots. They knew about the dodgy/illegal goods being carried in the cargo hold. They planned this thoroughly to make sure the plane would not be found. It is not hard to do and all the verifiable facts fit in with a plain old ordinary theft. Including the reticence of the authorities to publish a manifest, I mean come on DUH!!!!

There is no way it landed on land due to the amount of surveillance that occurs around border areas and few miles offshore. The plane would have to cross one of these and it would have been seen. There is nothing mid ocean which is why it is the perfect place to ditch a plane. Auto pilot would ensure it travelled for hours.

If the authorities publish the full manifest and it contains goods that should never have been on a passenger plane then there will be billions of dollars of claims as the families sue the airline, the government and anyone else who knew.

No aliens, no CIA black op, no silent invisible terrorist, just plain old ordinary 99% of the time cause : MONEY.

I'm not really picking up what your putting down mate. It was a heist that was planned by the pilots, that didn't land on terra firma, and then what? Sounds real Tom Clancy like if you ask me, just sayin.

As I have said, I do believe the plane was taken down, however, really "the variables are infinite and not open to useful speculation".

originally posted by: ProphetZoroaster
Can you guys check the following location on Google Earth, you will see a plane. I'm not sure if it is MH370 though I personally feel that it must be the plane.

Just to inform you that the location is a very dense forest in Cambodia which is below the flight route between Malaysia and China.

Did you put the mark on the map? It looks a bit like a plane but the mark is covering. The watermark is not clear there to date the picture either, though some not far away are dated 2013. 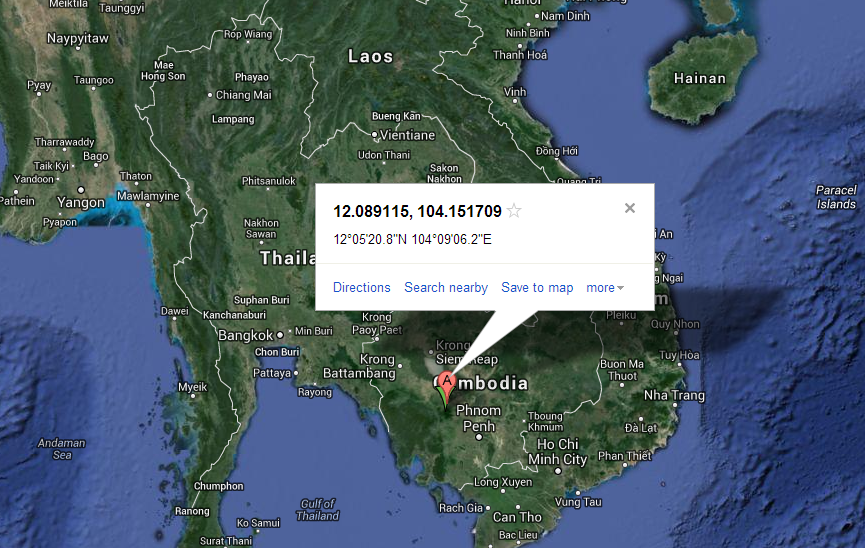 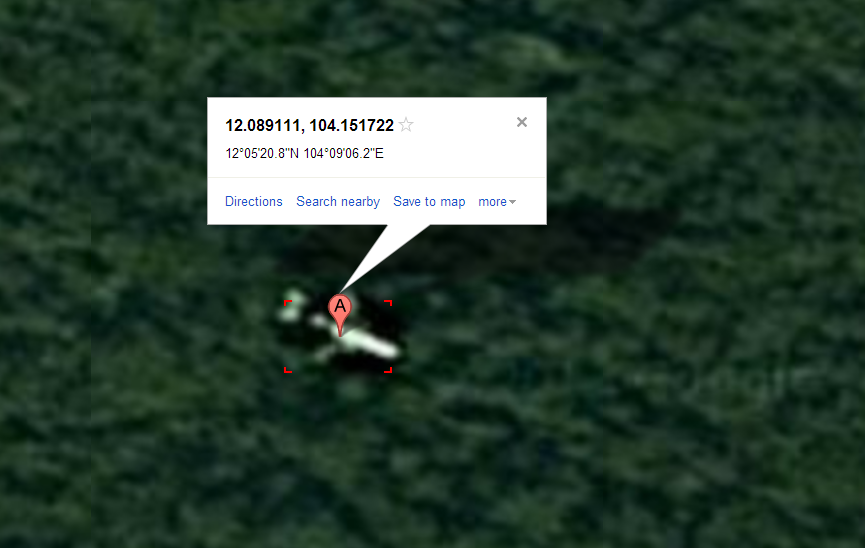 Wouldn't that be kind of hard to conceal from the thousands of servicemen on the island?

originally posted by: RP2SticksOfDynamite
Not a single piece of debris or a single floating passport, absolutely nothing = maybe it didnt crash or get shot down.
You could crash a large plane full of passengers in the middle of any ocean/sea and you can guarentee that debris and bodies etc will be found in this day and age!! And when you combine this with the all the schinnanigans..well....appeal to your inner common sense!

This plane landed I think!!

300 Pieces of debris were seen by satellite between 16-23 March and some of those debris were photographed from a Chinese IL-76 search plane on 24 March.

Chinese satellite colour photography of the debris patch revealed pieces with the red blue and white colours of MH370's airline livery.
edit on 6-11-2014 by sy.gunson because: (no reason given)


My own opinion of what happened. I think it landed somewhere. No idea where or why but I don't think it crashed in the sea.

It's certainly possible the plane landed somewhere, it's possible that Mike McKay did see the plane on fire too.
That's what's wrong here, that information has been repeatedly ignored in favour of the satellites tentative information from Inmarsat, which I'm near sure is flawed.

Mike McKay was not necessarily wrong in what he reported seeing from his oil rig.

The ATSB determined in August that the satellite BOF track of MH370 from 18:25 UTC resembled that of a hypoxic unresponsive crew. In other words a depressurised plane.

In the event of a cockpit fire at 35,000ft crew could well have been incapacitated by a blaze and unable to take remedial action to save the aircraft. It infers however that the plane had already been turned back before the blaze erupted.

Because naked flames can't exist at 35,000ft due to lack of oxygen, any fire seen by Mike McKay would have to have begun inside the cabin. The fire would have melted an escape path throough the fuselage skin and flared outside for McKay to see it.