That's racist. Why do you use a Darth Vader helmet instead of a Storm Trooper helmet? And why is Obama's hand white?

You know I couldn't resist teasing you Beezzer. I actually agree with you here. I don't think Obama is as in love with America as a lot of America is with him.


Look who was the first to race bait. Lovely.

It was also a joke... No where near race baiting. Why don't you learn to laugh a little? Shiit's not that serious. Seriously.

Simply pointing out the irony in race baiting by making a joke about what race baiters might say. No need to explain anything to me. However, let's set all that aside and examine what this topic is actually about.

Here are several links to coverage about the President's speech. None of them mentions the icy reception or George Washington bashing, not even the right-wing sources.

I watched the speech and I didn't pick up on any Washington-slamming, anything un-American or a particularly "icy reception."

Obama is touting how strong America and it's military are as a global leader--- at the same time he's pushing for more UN involvement --- while in the background, more General's are being retired and the gov. cutting back on the military as a whole

Also, due to Pres. Obama’s foreign policy--or lack of--, he has weakened U.S. influence around the globe
Not to mention the countless scandals going on in his administration, so how can any one listen to him talking about 'rules of law' ?

So it's kinda hard, one would think, for the cadets at West Point to respect him or his speech

Sounded like more of his usual preachy/philosophical type of speech that he likes to deliver
If I want to be preached to, I'll go to church and listen to the sermon there

He spent too many years in Rev.Wright's church ....just saying

Obama puts his pinky finger to the corner of his and mouth and cackles,just so you know.

Seriously, I don't think he's anymore evil than any other politician out there,thing is people are tired of them all and their grabbing for everything for themselves and he's sitting at the top of the heap making an easy target.

posted on May, 28 2014 @ 09:38 PM
link
Well, it is obvious that he never saw the speech before he performed it. Like a robot, his head waved back and forth between the screens, pretending to talk to people. That says something, doesn't it? Speech writers and social managers (propagandists) set this up for him and told him what he had to do today.

Oh, and his wife is an opportunist insect.

I missed this and it was addressed to me?? Is there any way I can get it through u2u Snarky?

You saw the same speech, read the same words as I did.

If you cannot discern from what we both read, then reiterating it would be pointless.


I can discern from this response that you are unable to substantiate your statements.

"Substitute teacher goes on a crazy rant in public

"Substitute teacher ,,Sean Bentley McDonald incoherently screamed about potential in a spectacle the school district explained as a medical episode."

maybe it was his delivery??
lol

originally posted by: frayedknot
Well, it is obvious that he never saw the speech before he performed it. Like a robot, his head waved back and forth between the screens, pretending to talk to people. That says something, doesn't it? Speech writers and social managers (propagandists) set this up for him and told him what he had to do today.

Oh, and his wife is an opportunist insect.

He seemed very off, a little out of it, uncomfortable, something was really strange.

The Motto of West Point is "Duty, Honor, Country," and the Cadet oath is "a cadet will not lie, cheat, steal, or tolerate those who do."

The 25 % who stood might want to review the Oath, they were very tolerant. (Yes, I know Obama is not a cadet, but do we really want a lower standard for the C in C than for the Cadets he will order to battle?)

posted on May, 28 2014 @ 10:04 PM
link
Chilly reception? Or indifference. They know it doesn't matter who sits in the White House. The game of politics has nothing to do with the mission.

They had the same indifferent reaction to his announcement of the death of Bin Laden…Who's really running things? It ain't the politicians.

cough cough......X General Betrayus is at the Bilderberg meeting!

Apparently there are still some men and women in West Point
that have a decent idea of what is going down. 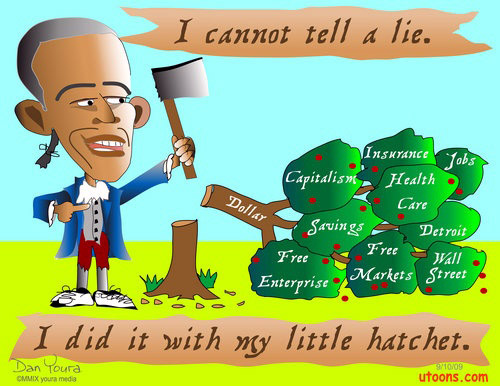 originally posted by: seeker1963
a reply to: snarky412

cough cough......X General Betrayus is at the Bilderberg meeting!

Thanks for that tid bit of info

posted on May, 28 2014 @ 10:34 PM
link
Such speeches are a waste of time because nothing can reverse three decades of casino capitalism and consumer spending.

I watched that speech. Definitely weak sauce. I imagine many of the Cadets didn't even want to attend. Does his speechwriter even know who he is going to be speaking too and a given day?

I can't agree with you more. He delivered that speech as though he was reading the obituary page to a cat. It's like he doesn't even understand what he is saying - he is just reading whatever is scrolling on the prompter.

Thanks for the Thread, X. F&S for your effort.

I'm not going to say anything about his speech, because I
got home late and everything was somewhat delayed..
including dinner, which I do not want pitching around in
my upper tract in some induced nightmare after watching
the POTUS speak to the cadets.

I did however view the troops' clip--- and I think there might
have been a bit of incredulity by a couple of guys looking
at each other.... I don't think it was for approval.

In the long run, and also in keeping with the USMA motto---
they can make you sit and listen; but I don't believe as an
officer candidate they can make you approve of the content:
yet.
I think that's "Duty, Honor, Country"...
not "Orders, Conditioning, Government".

C'mon Des, Obama would never use a drone to attack an American citi-. . . . wait, what?


This right here is the biggest problem, our king....I meant president has now given himself the power of a king, the ultimate power, the power to decide who lives and who dies, at naught but his word, no trial, no lawyer, no jury of your peers to judge you, just him saying kill him, even if you are just a 16 year old kid.

Obama isnt solely to blame here though, dont forget, there were millions of Americans cheering him on.........the sheep approve of the wolf culling the herd I guess.