Which Christ? The Son of Lucifer who died for your sins, or The Son of God who came to teach?

posted on May, 28 2014 @ 06:35 PM
link
Do you believe in Christ The Son of Lucifer who died for your sins and shed his peaceful light for the human race, so that people are free to live in evilness without caring about being good since Christ is already a human sacrifice and paid the price for all sins?

Or do you believe in Christ The Son of God, The One True Instructor/Teacher who came from God (Matthew 23:10), the one who taught you that you must do Works in order to be a Child of God, by loving your enemies, blessing those who curse you, praying for those who persecute you, and doing good to those who hate you? (Matthew 5:45), the one who taught you that it is through FORGIVING that you are Forgiven by God (Matthew 6:14-15)?

Wouldn't teaching this other Christ, this son of Lucifer be the perfect trick from the devil in order to get you to sin more since you believe it doesn't matter? Wouldn't it be a huge deception to get people to believe they are already forgiven for all of their sins when The True Christ taught that you must forgive FIRST then God forgives you? If all you have to do to be a Christian is believe that Christ existed, is The Son of God, and died for the sins of the world, then even Satan and his demons are Christians since they know the Truth about who Christ is and work hard to trick others.

Here is a video of The Pope and a prayer to Christ The Son of Lucifer:

Here is a translation of what is said:

et vivit et tecum regnat in sæcula sæculórum."
[And lives and reigns with you forever and ever]

It seems like The Pope agrees with Christ The Son of Lucifer who died for your sins so that you can be evil and not worry about doing good things.
edit on 28-5-2014 by arpgme because: (no reason given)

Very sure. You can even check it with different English-Latin dictionaries across the internet, or use Google Translate to see for yourself. Sure, you may not understand the grammar but the words are there. It really is declaring Christ as the Son of Lucifer.

Lúcifer, = Lucifer
qui = who
nescit = knows not
occásum = setting (being used in this sense to mean 'defeat')

Lucifer who knows no setting, Christ Your Son...

I don't really know if it should be considered an "invocation" either. The point was to show the beliefs of The Pope and Priests of The Vatican. This prayer happened more than once, and The Pope knows Latin. They admit that when they say that Christ died for everyone's sins so now you don't have to "treat others as you would like to be treated", that they are speaking of another "Christ" who is "The Son of Lucifer".

I don't really know if it should be considered an "invocation" either. The point was to show the beliefs of The Pope and Priests of The Vatican. This prayer happened more than once, and The Pope knows Latin. They admit that when they say that Christ died for everyone's sins so now you don't have to "treat others as you would like to be treated", that they are speaking of another "Christ" who is "The Son of Lucifer".

Is that what they said? And the Pope approved?

posted on May, 28 2014 @ 07:21 PM
link
I have thought of something similar while reading the myriad of thread on ATS on Christ and it could be a possibility. Christ/Lucifer in disguise taunts the Jews and gets himself killed for our sins and because of this action we don't need to care anymore about sinning, since we are forgiven in advance. Those who still care about sin will follow the forgiveness part and turn the other cheek and love the despicable or those who willfully sin. So those who sin are loved no matter what they do and thus always win. Lucifer is way older, wiser and smarter than us, for now, I guess he could come up with such a grand scheme.

Regardless though, the 10 commandments are still true no matter what trick the devil pulls from his rear end. If Jesus was Lucifer in disguise then the Jews were right and we are still waiting for the Messiah. The apocalypse will give us what we need, the revelation of truth. One can only decide using his heart and we are being geared away from this way of thinking in my opinion, not all but many are following that path.

I love the Father, in my heart and trust in Him. The rest is just a distraction. HIS words are clear are they not?

As if the story weren't befuddling enough without mixing identities.
edit on 28-5-2014 by AfterInfinity because: (no reason given)

Those who sin do not forgive, that is why the world is in such a mess. People love revenge. People love fights. People love wars. People get revenge because they feel that if all of their sins are already forgiven, then why not? It is a natural reaction for a human/animal anyway (but it is opposed to the spirit which is Love and Forgiveness)

The trick is to get everyone to believe that Jesus died for everyone sins and that mean all sins are already paid for and it doesn't matter what you do, you do not have to become a nicer, caring, patient, forgiving human being.

In this prayer when they prayed to Lucifer they referred to this "Jesus" who died for everyone sins as "Christ Your Son". This Jesus who died for everyone's sins so that they are free to be a horrible as they want to be is referred to as "Christ The Son of Lucifer". With this "Christ The Son of Lucifer" teaching, we are taught it doesn't matter what we do since we are already forgiven.

Christ The Son of God taught that it does matter what we do, and we must Give love and Forgive others in order to be forgiven:


Forgiveness from God is NOT a free gift, therefore it can not be used as an excuse to be a horrible person to others.
edit on 28-5-2014 by arpgme because: (no reason given)

originally posted by: AfterInfinity
Hmm. This is curious indeed. I will wait and see what comes of the discussion.

As for the OP:

I think you are misinterpreting things slightly. See this link for an additional perspective.

As for works vs faith, that is an oooooold debate. One which needs to start with what you define works as before it can produce any fruit. So what would you define works as? In your OP, you list things like forgiving others and praying for one's enemies as works. I would agree with that, and suggest such things are necessary to the Christian faith.

You can't buy your way into heaven with acts (nor should you want to). That is where faith based salvation (and the works of the spirit) come in.

Maybe I'm hoping to be struck in the face with a revelation that will make the whole world suddenly make sense. Besides, the Pope invoking Lucifer? This is something I gotta see for myself.

I'm not even a Roman Catholic, but cmon, spreading blatant lies and misinformation?

If you're claiming to represent the Truth, Jesus Christ, you better represent what's actually true, not deception.

Cmon man. Lying in the name of Christ? Shame on you.

The Exsultet (spelled in pre-1920 editions of the Roman Missal as Exultet) or Easter Proclamation, in Latin Praeconium Paschale, is the hymn of praise sung, ideally by the deacon, before the paschal candle during the Easter Vigil in the Roman Rite of Mass. In the absence of a deacon, it may be sung by a priest, or by a cantor. It is sung after a procession with the Paschal Candle before the beginning of the Liturgy of the Word. It is also used in Anglican and various Lutheran Churches, as well as other Western Christian denominations.

May this flame be found still burning
by the Morning Star:
the one Morning Star who never sets,
Christ your Son,
who, coming back from death's domain,
has shed his peaceful light on humanity,
and lives and reigns for ever and ever.

myself and Deadsereph illumined this thread with Truth.

No need to further discuss this,

I'm guessing you didn't bother watching the video. ARPGme isn't making this up. Granted, the Pope doesn't actually say the stuff translated in the OP, but one of his affiliates most certainly does. And I've done some of the translating myself, and it checks out.

So maybe you should be looking at whoever it is doing the singing. Curiouser and curiouser...

ETA: caught your previous post. Understood and moving on...
edit on 28-5-2014 by AfterInfinity because: (no reason given)

Maybe I'm hoping to be struck in the face with a revelation that will make the whole world suddenly make sense. Besides, the Pope invoking Lucifer? This is something I gotta see for myself.

I hope it happens for you! If it does, I'd love to hear about it, since the world doesn't make a heck of a lot of sense to me either

As for the pope invoking lucifer (as in the one identified as satan before the fall), I think there is sufficient grounds within scripture to say that the name "Lucifer" has been misunderstood in scripture, and eventually took on a life of it's own.

Mind you Catholics do some sketchy things (in my personal opinion), so maybe the OP has a point? For instance, this (among many other things) always creeped me out: 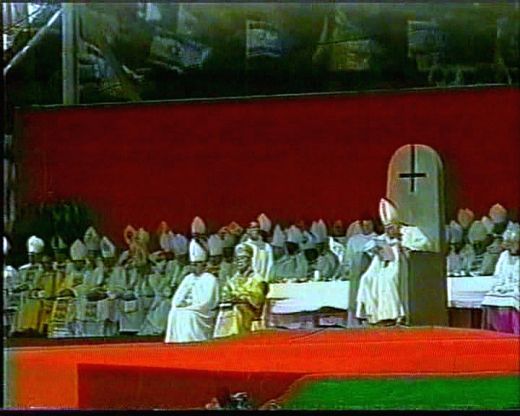 I'm sure the excuse is probably that Peter (the supposed founder and first pope of the Catholic church) requested to be crucified upside down because he was not worthy of dying in the same manner Jesus did, but still... It's kind of creepy.

I'm guessing you didn't search for a Roman Catholics explanation of said video.

I'm guessing you could care less about Truth.

originally posted by: godlover25
a reply to: AfterInfinity

I'm guessing you didn't search for a Roman Catholics explanation of said video.

I'm guessing you could care less about Truth.


That's a lot of assumptions to make in one post.
edit on 28-5-2014 by AfterInfinity because: (no reason given)


Why did you translate "inquam Lucifer" as "by the morning star" when inquam means "I say" in Latin?

Why did you translate "qui nescit occasum" as "who never sets" when "nescit" means "knows not"?

You completely left out that word. Sounds like a corrupted translation.

Is it really me who lied, or your Priests? If you don't believe me, you are free to translate it yourself. There are many Latin dictionaries available online and so is Google Translate.
edit on 28-5-2014 by arpgme because: (no reason given)

It is quite simple actually. The message is clear if you just simplify it like you do in math, love the Father the creator and follow the 10 commandments. The rest just makes you dizzy like you drank 10 beers with a straw while riding on a unimonkeycorn.

What else you gonna do?