I call him Super Americanu

His live action movie will have him shooting everyone up with US lead blazing from his cold US steel.

A mild mannered pizza delivery boy is delivering pizzas to a run down industrial complex on the outskirts of Chicago.

He is returning from a poorly tipped delivery when his car is rammed by an armoured truck escaping from terrorists trying to hijack it for its contents....radioactive chemicals being used in an underground super soldier program funded by a faceless alphabet agency.

The tests were being carried out on all sorts of animals and after the terrific crash they all get loose from their cages covered in the oozing, glowing chemicals. The delivery boy is staggering to his feet after crawling out from the crash. The shattered shell of the large armoured truck is before him. He hears some clammer coming from the toppled over truck when all of a sudden a bald eagle emerges from its cage and darts towards him. It scratches the boy with its awesome mutant talons across the chest.

The pain is instant and intense. He falls to his knees and transforms before the eyes of the militant terrorists just now arriving and pouring out of a large transport truck. They open fire with AKs and RPGs mercilessly spraying the general area of the overturned armoured truck with everything they have. The boy reacts on instinct and jumps 20 feet into the air landing behind them. He moves like the wind and slashes them apart with his new mighty talons. He is a freaking eagle.

He realizes something is different about him and for the first time in his life he feels powerful. Unstoppable. He looks over the scene of his decisive victory lying before him and notices one of the guards from the armoured truck trying to escape. He jumps up and in a mighty landing pins the guard to the ground. He grabs the guard and demands to know what has happened. The guard laughs and pulls out his ID from inside his vest. On the ID the boy reads the letters T.A.L.O.S. The guard smiles and says that he will soon find out. He lumps back lifeless in the new born heros firm grip letting his lifeless body hang.

The boy now knows what he must do. The other mutant animals could be anywhere. He has to find them and stop them before they do to others what was done to him. He notices the eagle that slashed him perched on the street light above him. He lifts his arm and it instinctively lands on it. He knows this large mutant Eagle will help him track down the other escapees. He sees through the birds eyes and feels its thoughts. "You need a name" he says to it with his mind. He thinks to its razor sharp talons that transformed him and says "you shall be known as Talon". "I must embrace my new form and I too must have a reborn name". "I will embrace the spirit of the symbol of America". "I will be known as SUPER AMERICANU!"

He looks down at two pistols on one of the downed guards...He decides it is fate and picks them up.

His weapons of choice.... 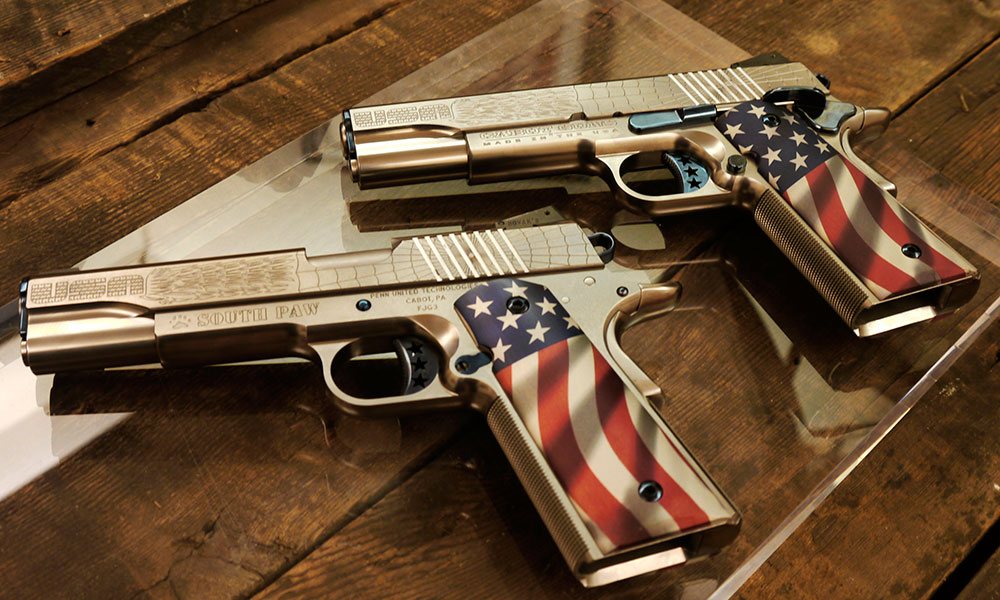 EDIT TO ADD:
Elaborated from a post in this thread.
www.abovetopsecret.com...

Im looking foreword to a lot more of this....seriously
edit on 28-5-2014 by Thisbseth because: (no reason given)

"Super Americanu" That name sounds like an Asian rip-off. Which is funny because all of his stuff was probably made in China.
edit on 28-5-2014 by AfterInfinity because: (no reason given)

So what has this got to do with comics? Are you storyboarding already? The origin story is pretty cool though honestly. Though, if I may be so bold, it would serve the story better if perhaps the power catalyst was, say, alien tech as opposed to chemical waste or whatever. It would allow for more creative license without having to worry about the real world science involved with the scenario you originally suggested.

Could be a funny, action packed book, though. The character honestly seems pretty solid, though I'm not crazy about the name.

Here is a redesign of the character.

I didnt want to use someone elses exact design.

originally posted by: tadaman
I am really getting into this. LOL

When this is over, you're going to have to make Super Americanu your avatar.

Are you using heromachine for design? Looks heromachine-ish. I freaking love that thing. When you are a gamer, HM3 is your friend.

Its pretty awesome. I am going to use it for all the characters. Everything is there....

I am still learning it, but the interface is smooth so its easy.

I use HM3 all the time. Its great if you can't actually draw characters (like me) its also great if you can draw, just using it as a springboard for character design. It helsp get a feel for what your characters actually look like when you're in the early stages. There are some pretty amazing pics done with HM.

That is freaking awesome. I am officially a Super Americanu fan!