You all need to know something...

If you believe in a God, he gave us free will to question. If he's all knowing, than he expects and wants us to question things in life. We learn by our mistakes, and we question our own actions and beliefs. I believe we're here to learn and improve upon our spirituality. Everything we do, say, or act is a way for us to evaluate ourselves and the people around us. How many times have you ever said to yourself, "I shouldn't have said that," or "what I did was wrong, I over reacted," or "I'm going to act differently next time." We constantly have these types of debates in our own minds. It's really trying to better yourself and trying to understand another person's feelings.

originally posted by: godlover25
In my mind calling someone who says "I believe in Jesus, yes, but His Father is evil, evil, very evil, a sicko who condones torture and murder" a deluded heretic ..


And what part of ... the murdering god of the Old Testament isn't really 'GOD', but instead is a fabrication made by fallible prophets who simply got it wrong ... don't you get? No one is calling the real God a sicko ... we are stating that the fake god that the prophets got wrong a sicko.

And you are still rude and wrong for calling people who you disagree with a 'deluded heretic'.

Forgive me EL SHADDAI, ELOHIM, ELOHI, TZABAOTH, ELIM, ASHER EHEIEH, YAH, TETRAGRAMMATON, SHADDAI or what ever your name is, all religions of earth with the exception of Buddhism are a crock of sh-it. Any religion that put constraints on the soul or orders to kill is no religion of unity. There for as i will not let my mind and spirit be tainted with absolute crap i ask that you teach me the truth directly so i can become who you designed me to become. I know you wanted alot more for me but the religions of earth got in the way.

I personally don't believe it is up to me or others to forgive you. Forgiveness is between you and your belief in God. It is personal. By asking others for forgiveness...it appears that you have yet to forgive yourself. This perspective of mine is based on your initial posts and then in your response regarding heresy/delusions.

Forgive yourself and others. If sincere, it is always more rewarding than asking strangers to forgive you. I am a stranger...I do not know you. I can not judge you, only perceive your existence through words written on this forum and vice versa, thus forgiveness from me would be senseless. We all make mistakes or speak before thinking. Actions are worth more than any words. Recognize the issue, forgive yourself sincerely. Others will know you are forgiven for your sincere changed actions will depict such.

It is called forGIVEness not forRECEIVEness for a valid reason! It is better to give than receive. God will provide you your forAWARDness not individuals. 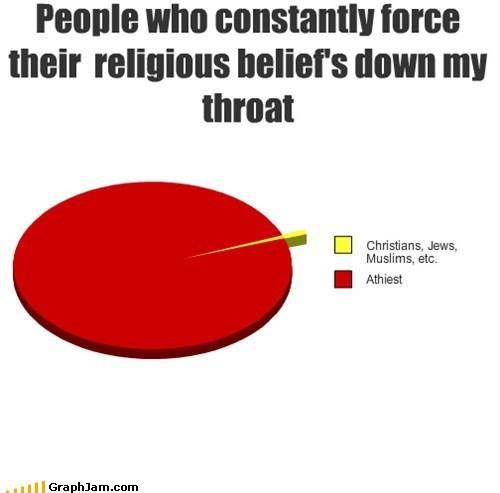 It's funny because I look around and don't see a single atheist church in my city. I'm not sure that I even know any atheists here other than myself. Where are you going that atheism is getting crammed down your throat? Where do you live? I should visit sometime.
edit on 28-5-2014 by AfterInfinity because: (no reason given)

Yes, we have an Atheist Church.

You are more than welcome and the weather is beautiful.

Yes, we have an Atheist Church.

You are more than welcome and the weather is beautiful.


Oh, California. That explains it. Well, then, maybe you should stop hanging around and gawking at the female attendees. I know that atheists are probably much more available than your average Baptist or Protestant, but there's a price with that.
edit on 28-5-2014 by AfterInfinity because: (no reason given)

posted on May, 29 2014 @ 05:54 AM
link
I thought the 'lord of hosts' gave gifts freely. Yet If one can be 'saved' is it not a permanent thing? What you are in fact saying is that JC Is a... blank blank giver. He said once saved always saved or was his Blood not powerful enough to save only Once/One Time ?
Did he lie? Must his people continuously ask forever and ever forgiveness for something he died but once to free you from ?
Just curious because if you cant trust Christ who can you trust?

You guys are great at that

originally posted by: godlover25
a reply to: awareness10

Somewhere in the world is a person who would also call you a heretic. Several people, probably. Everyone's a heretic in someone's book. Pun intended.

Besides, I thought this thread was about love and acceptance?
edit on 29-5-2014 by AfterInfinity because: (no reason given)

If there was a forum about people who believe in Santa Claus, I wouldn't spend hours a day replying to threads on it arguing with something that I know to be ludicrous and untrue,

But if I had an inkling of doubt, and suspected maybe Santa WAS real, and it bothered me people would believe in Santa, maybe then I would spend time debating with them about Mr. Kringles existence....

originally posted by: godlover25
a reply to: awareness10


So in fact what you are saying is that your personal ideal of salvation is
greater than religions older than your personal religious belief? hmmm ok
that makes absolutely no sense. Anyways enjoy your personal hell / heaven
whatever that may be. In this world 'what you believe you create'. Illusion
here is most powerful.
Google 'REALITY IS AN ILLUSION' you may learn the truth.

originally posted by: AfterInfinity
Besides, I thought this thread was about love and acceptance?


Did you really think that? I've got a bridge to sell you .... :devil (I know, you were being sarcastic) "LOVE" isn't displayed by going around calling people 'delusional heretics' or 'swine' that you won't cast your pearls before. Self righteousness trying to put on a 'love' mask ...

but we do do those things in the usa. our taxes go to feed and clothe and shelter and provide medical care, for people who are down on their luck. many who have enough left over to pay their bills and survive, also give to various charities like the red cross and donate their time and energy in crises. there's only so much you can give however, before you also need someone to help you because you're completely broke. that seems counterproductive to helping others.

and hugs from this jesus freak to you.

This is the most confusing view of biblical deity structure I think I have read in a while. There is a god who has sons, one of which is jesus who is a god that made humans, on a different gods planet. Which leads us to jesus having to pay a price to the bad god for us here when he created us here in the first place? To me that implies the bad god is greater in power than jesus. Color me confused.

yep and the text supports that, too. the owner of the planet took jesus up into a high mountain and showed him the kingdoms of the world and said, hey let's make a deal. you work for me instead, and i'll just give you it, straight up. (paraphrased). but they already had a deal in the divine court, that jesus was determined to fulfill his end of. this is also why as the god of this world is going out of power, he tries to totally screw the planet up so jesus inherits an ecologically screwed up planet with most of its inhabitants dead or dying. the god of this world, is a very mean guy.

To me that implies the bad god is greater in power than jesus. Color me confused.

divine law dictates what the extent of power is on a planet. remember, satan isn't imprisoned yet, he's still in charge of a sector of creation in the universe. and he has access to the throneroom and divine court, where he brings matters relating to this planet to the attention of the judge of the sons of god. (the father)

he doesn't like humans, who were created by the god of life and healing, the creator god, jesus the father of humanity.
this much is evident just by reading what his reaction was to the first procreative human beings.