Monsanto’s Roundup Found in 75% of Air and Rain Samples

A new U.S. Geological Survey has concluded that pesticides can be found in, well, just about anything.

Roundup herbicide, Monsanto’s flagship weed killer, was present in 75 percent of air and rainfall test samples, according to the study, which focused on Mississippi’s highly fertile Delta agricultural region.

GreenMedInfo reports new research, soon to be published by Environmental Toxicology and Chemistry journal, discovered the traces over a 12-year span from 1995-2007.

In recent years, Roundup was found to be even more toxic than it was when first approved for agricultural use, though that discovery has not led to any changes in regulation of the pesticide. Moreover, Roundup’s overuse has enabled weeds and insects to build an immunity to its harsh toxins.


Even though the study was limited to the Mississippi Delta region, it's an alarming reminder on how vulnerable our ecosystem is when it's continuously mistreated in the name of financial gain disguised under the false pretense of technology, science and progress. 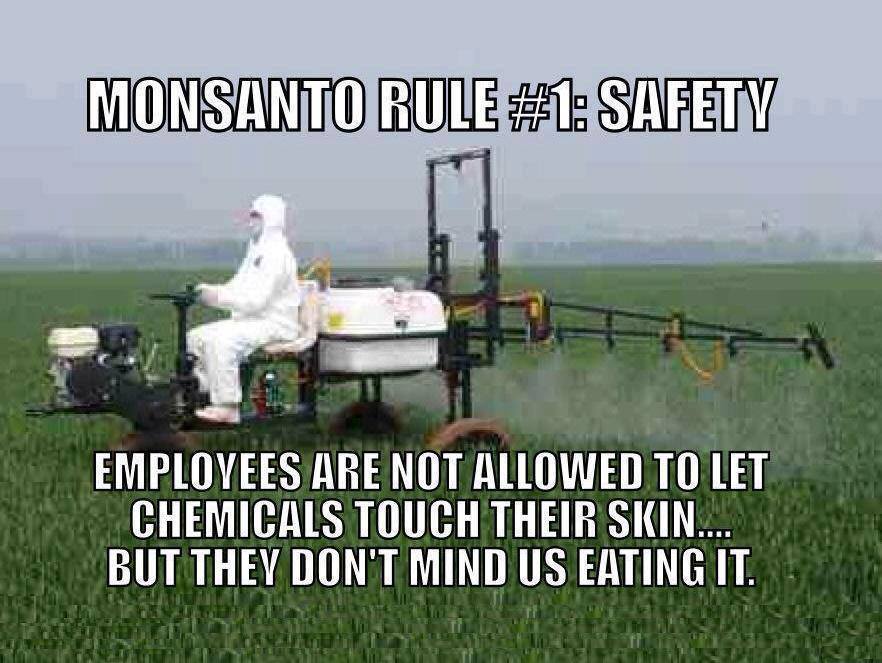 Some of you may argue that they wear the suit since it's only harmful in concentrated amounts and is not found in our food when it hits the dinner table, but if that's the case, why is it turning up in 75% of our air and water?

The article also discusses some of the dangers of this "ROUNDUP".

What do you think ATS?
edit on 5/28/2014 by Corruption Exposed because: SOURCE

I have heard of this as well...very sad indeed.

The stuff is turning up pretty much everywhere

I hope that one day we look back and realize how wrong we were to allow this to happen.

And I believe the plants grow and retain the chemicals and I don't think the stuff can be just "washed off".

The chemicals involved with the whole GMO thing is a bigger hazard than the "modifications".

And I bet there's permanent damage to human DNA as well.


Somebody asked a silly question a few months back on a website that answers GMO issues....

Look at the question and read the "answer" and decide what's what...

Ask Us Anything About GMOs!

Is there really any doubt as to the power of the corpratracracy?

I agree with everything you mentioned Xuenchen and you are most likely correct on all points.

Part of me wanted to include the possible effects on our DNA but as this is not one of my strong fields I did not want to subject myself to the wrath of the on site arm-chair scientists LOL!

If they are finding it in our air and rain water, the chances ares slim that they are able to eliminate it from our food, and water supply now too I guess according to this study.

Would Monsanto benefit from a Libertarian led US government? I'm reading they would like to eliminate the EPA and FDA. Rand Paul has talked a little about this.

I wonder when corporates really start getting behind Libertarian candidates? Ayn Rand would not have a problem drinking Roundup. The strong would survive.

As a Canadian, I have a different view on the American political system than most Americans. If I was American I would pledge allegiance to no party as for what I have seen they are all bought and paid for, and if there are some that aren't yet, they all have a price.

I would love to see a sincere political party surface in the USA who would actually put an end to this madness and many other issues at the same time...regrettably presidents are selected not elected - by the corporations, bankers and lobbyists (they're all the same to me anyways).

Cheers and best of luck!

rickymouse
+2 more
posted on May, 28 2014 @ 02:19 PM
link
They will have us dependent on Monsanto to provide all food soon. They will screw up all the land. Weeds actually are necessary for our environment, many creatures count on them. Maybe monsanto wants to kill all the natural medicines, they are tied to pharmaceuticals.

In all reality the things you briefly mentioned would make a great thread all in itself.

The rabbit hole goes deep and am glad to know that fellow ATS members can see this.

Glyphosate's mode of action is to inhibit an enzyme involved in the synthesis of the aromatic amino acids tyrosine, tryptophan and phenylalanine. It is absorbed through foliage and translocated to growing points. Because of this mode of action, it is only effective on actively growing plants; it is not effective as a pre-emergence herbicide.

For anyone who hasn't checked into what it does.

Libertarians of course have different factions just like all "parties".

I would interpret "ending the EPA" as more of ending the pay-offs and criminal activity within.

Perhaps a true "Libertarian" system would not even have a "Monsanto" problem to begin with.

But then again, I am for a total vote system that has referendums on all legislation.

So in other words it is ineffective in many of its uses, and poisonous?

There is absolutely no reason to be using so much of this stuff from what I can tell, other than fattening the pockets of already wealthy people.

Sadly this does not surprise me.
RoundUp is the reason for GM products like GM Soy. RoundUp was killing crops so they had to make crops that were resistant to the product.

Here is an article from ISIS (the website is archived by the British Library as UK national documentary heritage) about a study that was conducted on rats that were given GM Soya.
GM Soya fed Rats: stunted, dead or sterile

Female rats fed genetically modified (GM) soya produced excessive numbers of severely stunted pups with over half of the litter dying within three weeks, and the surviving pups are sterile.

Our previous studies have demonstrated that stable microRNAs (miRNAs) in mammalian serum and plasma are actively secreted from tissues and cells and can serve as a novel class of biomarkers for diseases, and act as signaling molecules in intercellular communication. Here, we report the surprising finding that exogenous plant miRNAs are present in the sera and tissues of various animals and that these exogenous plant miRNAs are primarily acquired orally, through food intake. MIR168a is abundant in rice and is one of the most highly enriched exogenous plant miRNAs in the sera of Chinese subjects. Functional studies in vitro and in vivo demonstrated that MIR168a could bind to the human/mouse low-density lipoprotein receptor adapter protein 1 (LDLRAP1) mRNA, inhibit LDLRAP1 expression in liver, and consequently decrease LDL removal from mouse plasma. These findings demonstrate that exogenous plant miRNAs in food can regulate the expression of target genes in mammals.

Upon investigation of the global miRNA expression profile in human serum, we found that exogenous plant miRNAs were consistently present in the serum of healthy Chinese men and women.

Now I won't pretend that I understand everything said in that article, but from what I read, this is what I took away from it:
The food we eat & even our cattle eat, can have effects, to a certain degree, on our microDNA. Therefore if we/animals we eat, is contaminated with toxins/poisons/chemicals, it can get mess with the microDNA & cause problems. ((sorry, having a bit of a hard time explaining this through a pounding migraine))


Conclusion: Monsanto/RoundUp/GMO is very harmful & needs to stop!!!! The Canadian Monsanto PR women said that they run tests to see if GMO is harmful but they don't run the tests for a long period of time. She also said how if they knew that GMO was bad, they would pull the plug on it, just like other companies have done when they found out their products were harmful. BUT that's not always true, it can take awhile for the company to admit there is a problem, even when they know it.

Example: PG&E vs Erin Brockovich. (the movie was based on true events) There was contamination of drinking water with hexavalent chromium & people were getting cancer. ((Erin Brockovich wiki

The #1 goal of U.S corporations is to make $$ and if that means some people get sick, so be it.

It worked really well at first and was safer than many other products. But nature has a way of changing itself, doesn't it. Survival by adapting.

It is alleged to have worked well at first, but they knew the dangers, and they had an agenda...financial monopoly and ownership over our agriculture system. Patented poison to put it simple.

That being said, I do believe that genetically modifying organisms with the proper intentions of helping humanity instead of aiming towards wealth would be a good thing. Sadly the people who control this industry don't have our interests in mind, and the ones that doe are put out of business quickly.

Money talks, everything else walks. Even studies proving this stuff (glyphosate) to be absolute poison are quickly "debunked" by those with links to the people who have been exposed. I wish I had the money to change the course of history and science.
edit on 5/28/2014 by Corruption Exposed because: (no reason given)

The bad news is what are they going to replace round-up with?,

And the other 25% is pharmaceuticals? I kid. No...maybe not.

If definitely kills grass and other plants that haven't been adapted. I have trouble deciding how much to believe from both sides of the argument. History says the government can be bought thought.

One problem seems to be it doesn't break down in water easily so runoff is bad.

posted on May, 28 2014 @ 06:06 PM
link
The odds are that the people in charge of Monsanto are psychopaths, as that would define why and how they could do this to people and the environment. Psychopaths often rise to the very top of corporate and political fields, and those who work with them who aren't psychopathic probably fear the loss of their income if they speak up and try to corral the psychopaths. Not to mention these corporation's Board of Directors. Dens of lizards, and not the David Icke kind - the psychopathic kind.