The Curse of Humbaba (The Terrible)

posted on May, 28 2014 @ 10:56 AM
link
Often in this forum i see people recount tales of encountering strange night time terrors with distorted Demonic face often in lucid dreams were there is no sense of passing from awake to asleep or a curious floating head, it is likely they have met Humbaba 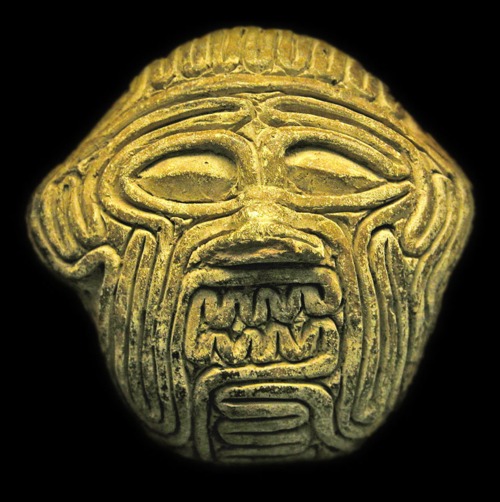 Humbaba was a monstrous giant of immemorial age raised by Utu, the Sun. Humbaba was the guardian of the Cedar Forest, where the gods lived, by the will of the god Enlil, who "assigned Humbaba as a terror to human beings." He is the brother of Pazuzu

His face is inscribed in a single coiling line like that of the coiled entrails of men and beasts, from which omens might be read,Guardian of the Fortress of Intestines.

Anyone who has encountered Humbaba will confirm that he is indeed a terror, but the greater question is why should they, what has Humbaba got to do with anything...!?!...this question takes on significant complexity when it is realized that Humbaba possesed seven radiant and powerful auras which Gilgamesh tricks out of him and takes for himself.

Having considered wikipedia we could then perhaps turn to the Necronomicon for insight, were there is a veritable sigil of Humbaba and were we are informed; And it is Humbaba appears to the priest, will not the dread Pazuzu also be there? Lord of all fevers and plagues, grinning Dark Angel of the Four Wings, horned, with rotting genitalia, and it is the able magician indeed who can remove Pazuzu once he has laid hold of a man, for Pazuzu lays hold unto death.

Know that Humbaba and Pazuzu are brothers. Humbaba is the eldest, who rides upon a silent, whispering wind and claims the flocks for his own, by which sign you shall know that Pazuzu will come.

There is probably no little humour involved in relating a Demon whose face is formed of the intestines to terrors associated with Pazazu a Demon of the four winds, but it's probably time honoured and will give some indication with regards to the labyrinthine complexities

The motivation of Gilgamesh in travelling to the Cedar Forest the realm of the Gods, to confront Humbaba, was that he wished to achieve immortality and overcome corruption of the body through death.

In Uruk people are dying, and souls are full of distress. People are lost -- that fills me with dismay. I lean out over the city wall: bodies in the water make the river almost overflow. That is what I see: that people die thus, which fills me with despair; that the end of life is unavoidable; that the grave, the all-powerful underworld, will spare no one

Thus Humbaba is an obstacle to achieving Divine immortality, when Gilgamesh and Enkidu arrive at his forest he induces through his auras a condition between sleeping and waking; Humbaba awoke from within his lair. The commotion from all of the chopping and hacking had wakened him. Humbaba took his auras

Gilgamesh immediately began to grow sluggish as though he were falling asleep. His friend and adviser Enkidu grew confused as though he had just been struck hard upon the head.

Enkidu was the first to wake. He shuddered from his dream and rubbed his eyes. At first he thought that what had happened had all been part of his dream, but there was silence all around him.

"You have fallen asleep. Gilgamesh, lord of Kulaba how long will you sleep?" . He attempted to shake him and call to him in order to wake him. "It is getting late. The mountains are becoming harder to see as the shadows cover them."

The first thing to overcome then is the state of altered consciousness through which Humbaba manifests, then it was a case of stripping him of his seven auras through the promise of gifts, Gilgamesh cheats. The entrails in Sumeria were used to determine the fates of candidates wishing to enter into High status Priesthood, a goat would be offered and examined and any blemish and abnormalities perceived within would go against the candidate, this is the only attested form of Divination from Sumeria, though the Akkadians greatly extended the practise of reading omens from entrails, so it is notable that Gilgamesh took a sacrificial goat to the cedar mountain.

Gilgamesh took the counsel of his servant and friend. He had a white kid brought to him. He held the young sacrificial goat close to him and placed the holy staff before its nose.

It isn't mentioned what became of it, but the fate of his endeavour was bound up with favourable determination of the entrails. 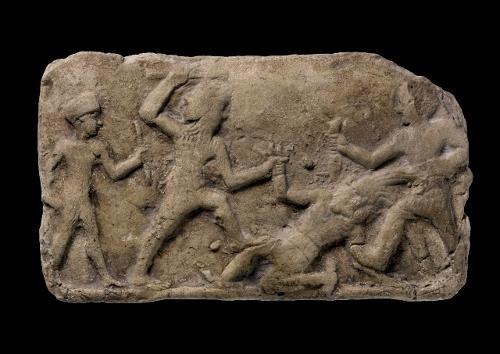 When Gilgamesh takes the severed head of Humbaba to show Enlil the God is not pleased, explaining that Humbaba had a Divine function as guardian of the sacred rights of the Cedar forest, he takes and re-distributes the seven radiant auras;


Enlil then took the powerful auras from Gilgamesh and began distributing their power. The lord of the gods gave Huwawa's first aura to the fields as this would bring fruitfulness to the lands. He gave his second aura to the rivers to feed those fields. The third he gave reed beds and another to the lions to compliment the power they already had. He gave Huwawa's next aura to the forests and hills. He gave another aura to the debt slaves as he was a great lord of wealth and prosperity. This proved him to be great among masters.

Finally, in memory of Huwawa, gave his seventh aura to Nungal, the goddess of prisoners.

Given the association with internal affairs it is likely that these seven auras were the equivalent of the seven Indian chakras, Enlil places them within natural associations. In the Sumerian version of the epic once Humbaba is stripped of his powers defeating him was quite straight forward, Gilgamesh simply punched him, but in a Babylonian version there is a far more involved great invoking of the powers of nature; Enkidu spoke to Gilgamesh, saying:'"Why, my friend, are you whining so pitiably, hiding behind your whimpering?

Now there, my friend,in the coppersmith's channel again to blow the bellows for an hour, the glowing metal for an hour, to send the Flood, to crack the Whip, do not snatch your feet away, do not turn your back strike even harder!"

The ground split open with the heels of their feet,as they whirled around in circles Mt. Hermon and Lebanon split, white clouds darkened,death rained down on them like fog.Shamash raised up against Humbaba mighty tempests'--Southwind, Northwind, Eastwind, Westwind, Whistling Wind, Piercing Wind, Blizzard, Bad Wind, Wind of Simurru,Demon Wind, Ice Wind, Storm, Sandstorm--thirteen winds rose up against him

So there a far more deterministic approach to whipping up a storm to seize the power of the auras, which is what will always be involved in Humbaba confrontations.

Gilgamesh and Huwawa version A


When one encounters Humbaba there is no discontinuity between waking conscious thought and dream, they both flow seamlessly, conscious conjecture carries through into the dream realm, in this sense it is as becoming fully awakened within Divine consciousness, areas normally off limits with Humbaba securing that area.

a reply to: Pinocchio


I expect that like Humbaba, your 'Bah Hum bug' is not easily understood and appreciated...


When one encounters Humbaba there is no discontinuity between waking conscious thought and dream, they both flow seamlessly, conscious conjecture carries through into the dream realm, in this sense it is as becoming fully awakened within Divine consciousness, areas normally off limits with Humbaba securing that area.

a reply to: Pinocchio


I expect that like Humbaba, your 'Bah Hum bug' is not easily understood and appreciated...

So what does one do when they encounter Humbaba?


If you have a Multi Pass show that;

Otherwise note to personal protective Deity to 'please wake if i stray into the realm of Humbaba' or like Gilgamesh ask partner to give a dig if acting weird whilst sleeping, but only those who choose adventure are likely to find themselves there anyway, so selecting risk free dream locales is always the safer option.

Ah...sometimes I love synchronicity I just finished watching that Movie on netflix just a little bit ago! In ways it is a terrible plot holed movie but in other a masterpiece of sci-fi!

Hmmm considering my dreams have been about battling Agent Smith (oddly its been a long time since I have seen the Matrix) instead of my hum-drum boring dreams of late. I am going to take heed to finding a Multi-Pass or acquire the assistance of a Dreamguardian.

The connection of the Labyrinth to deep states of altered dream consciousness, through it's derivation from the intestines, the belly of the beast as it were is interesting as it was set out in the Movie 'Inception' no...?