Being mostly white Albion stock I don't get stopped and searched. It would drive me mad if I was stopped regularly. The expectation of a search leads to body language that looks suspicious, which leads to a tense search. A common reaction is, "If you want me to be trouble I'll be trouble". The whole thing becomes a self fulfilling prophecy. Prisons have a high number of these people.

Here we step into a slightly surreal realm. Scenario fulfilment, seeing what you've been led to expect. A white burglar was caught after numerous break-ins. He had been witnessed breaking in at night but was described as black. The image of the troubled black youth has become so inflated he doesn't even have to be black. The friend who told me these stories works in prisons and finds this very concerning. The personal tragedies are real. The imagined dangers aren't.

Getting onto anti-native racism. The mother of a young student tried to get help with his fees. After three days she said, "If he was anything other than young native male with no criminal record he'd get funding". They opened a paypal account and asked for donations. People happily gave enough to cover his costs. In other circumstances lack of funding for education could precede the decision to commit crimes.

I was asked to write on this subject and I know almost nothing about it. I'd like to hear your views on how we can improve our situation.
edit on 27 5 2014 by Kester because: change wording

posted on May, 27 2014 @ 11:55 AM
link
...And i think this is why everyone observes more general racism from citizens to other citizens in the Black and Asian community than we do the White community's - because the Whites simply dont get as much negative stereotyping.

Its sort of a strange racial loop.

Angry and racist because you are singled out, because of race, so you act racist which in turn gets you more attention to being stopped and searched, regardless of any actual crimes (which we all know every race does more or less equally).

originally posted by: Kester
a reply to: Biigs

Well. Since the stop and search are effective at removing weapons and drugs and helping to make carrying such things less appealing - so perhaps make it like parking tickets - add a quota to stop and searches that says an officer should try to balance out racially. But an attempt like that to "even things out" is itself, racial because you can argue that police nly stop those they thing look like they are carrying something and that race shouldn't be an issue.

Perhaps its as much about race as it is fashion.

If London chavs* wore suits, would they be stopped as much?

*Chav of all race or creed.


Angry and racist because you are singled out, because of race, so you act racist which in turn gets you more attention to being stopped and searched, regardless of any actual crimes (which we all know every race does more or less equally).

So much truth in that alone. Now add generation and people with biased outlook and we have the modern racism cycle.

posted on May, 27 2014 @ 12:41 PM
link
When the pressure to conform to dress codes is traced back who is really setting the trends and why?

Behind all this do we have the clothing and music industry conspiring with the legal and prison industry creating hundreds of thousands of customers for their goods and services.

The racism cycle. A self feeding perpetual loop. Knocked in just the right place it will set up a wobble and fall over. The right place will be those who are deliberately perpetuating it.

posted on May, 27 2014 @ 12:50 PM
link
yes times are changing , in the sixties it was any male teen with long hair that was constantly being stopped and questioned

Are you a spook reading over my shoulder? I just typed then deleted about getting followed by store detectives every time I went shopping till the day I cut my hair.

Heh... I am of a similar ilk to yourself, in terms of the genetic soup which lead to my coming into the world. However, I was stopped and searched not long after the begining of the war on terror. Something about my beard, hair length, and my preference for bandanas lead a police car flagging me down WHILE I WAS WALKING and its occupants asking me my name, then following my response to such questioning with "Oh, sorry mate, thought you might have been this guy!", whereupon they showed me a list of the fifteen most wanted international terror suspects that they had in the car with them.

I must say, I found it disheartening to know that our safety was in the hands of persons of that caliber. 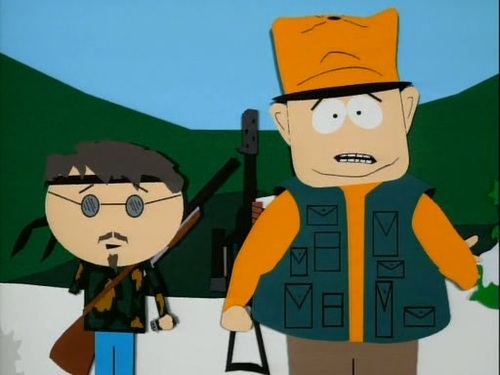 At times like that, I am pretty damned happy that our police do NOT carry firearms as a matter of standard practice!

Being closely related to a false flag terrorist I would love to be subjected to a terror stop. Ranting about the criminality of fake terror statutes is one of my favourite pastimes.

Printing out stuff like this and carrying it around in your pocket turns a search into an interesting conversation.

Concerned constables have been warning us that the pressures being applied to policing make the job less attractive leading to a lower standard of recruit. It would get worse if we allowed it, hence my interest in defending the constables.

A lone yachtsman woke up one night to find a large, muscular man in ragged clothing climbing onto his yacht. The yachtsman said if he'd had a gun he would have used it. Then the intruder said, "You help me please?" He was a fisherman whose boat had sunk and he'd been swimming for hours. I heard another personal story just a few days ago that's about a hundred million times worse than that. Guns being discharged without time to assess the situation leading to lifetime consequences for the survivors.

originally posted by: TrueBrit
...asking me my name...

Don't mean to be picky but is it your name? As I understand it the legal fiction recorded on your birth certificate is given to private financiers in exchange for loans of fiat currency. They explain it as needing to know how many people there are so they can judge financial needs. It's the legal fiction you use for commercial transactions but it belongs to the enemy. I may be wrong.

My name is just as much mine, as anyone elses name is theirs.

Make of that what you will!

You're right, we can claim whatever name we wish as ours.

If you study the information available on this subject you'll find when constables and others in the know try to get confirmation of your 'name' they are actually getting agreement to a commercial contract. The Law applies to all, regardless of alleged identity. Statutes only apply with consent. Statutes and Laws are two different things. Legal refers to statutes, Lawful refers to Law. We all know what is Law because we wouldn't want those things done to us. Statutes have to be written to record them. Nobody could possibly know all of them because there are too many. The profits made by legal practitioners depend on obscuring and denying this truth. Your registered name is used for contracts within the legal system.

When you successfully use this knowledge and bring attempts to restrict your freedom to a dead end they say you're being awkward, or you're mad, or it's too silly for them to bother with. But the fact is it brings them to a dead end.


Wear a webcam and broadcast to a private control centre. Raise an alarm if stopped & searched while under Stress & Duress. Also organise a team of volunteers/employees to attend any incident .

Only a resisting public can stop racial stereo typing .