Hi there!
As we all know, there are a few big players in this world... George Soros and the Koch brothers amongst them.

The Koch oil brothers are famous for using their amassed wealth to steer the public away from vital issues such as 'global warming'.

By funding bogus scientific papers from bent and paid off scientists and then using cleverly set up lobbying groups, the Koch brothers present to the world a coherent and overwhelming opposition to the True Science that has been accumulated, research that clearly demonstrates a danger to humanity from continued burning of fossil fuels.

This time Haliburton has funded research that concludes that

Solar panels are BAD because they drain the Sun of its Energy!

In the article above you will even see the quote...

"what good is clean air? When our own sun is no longer functional?"

You couldn't make this stuff up. The Koch bro's and big Oil are trying to stop us from doing stuff like this:


They're whole empire is going to crumble if Solar Roads and electric/hydrogen fuel cell Cars replace our old way of life.


And finally, I'm just putting this thought out there to put the whole 'illuminati' thing in to context...

If illuminati was one coherent thing.

Then why is George Soros's militia Progress Now crashing the Koch's ALEC meetings?
article worth reading where Progress Now is mentioned

It seems to me there's a serious rivalry between those two 'illuminati' flavour elites.

National Report (_national_report_dot_net_) is a satirical website devoted to often subtle parodies of real news which convince the unwary.

posted on May, 26 2014 @ 07:30 AM
link
No one cares what the Koch brothers say,in todays world if something works and people can get it they will buy it,there is no regional suppression ability anymore with the internet what kind of idiots would waste money on an olde school disinformation effort,ha ha ha ha.

That is just money invested in Americas psychotic Coup de tat based Political system ,money intended to create some eripheral impact that will support some Government or political manouvering.

If a guy in India invents a solar energy method that works no one is suppressing it anymore,ha ha ha ha hah and EVERYONE WILL BUY ONE GLOBALLY IF THEY CAN ,welcome to the new world people.

posted on May, 26 2014 @ 07:47 AM
link
I have some solar, not a lot just 240 watts.
But I estimate it knocks 20-40 percent off of my extortion bill depending on the time of year.
Solar works and it is light years ahead of where it was just 20 years ago.
Solar roads could save this world, everyone should get solar.

Clearly the left has made it their mission to give the solar panel, hydrogen powered engine jobs to those who would prove it is "true" that making those things would NOT be profitable. They take the money and produce nothing but money for friends of the DNC or RNC for that matter. Mostly DNC at this point.

Middle TN State U in Murfreesboro built a car over 25 years back that runs on WATER , cracks water on demand or uses hydrogen in a cylinder. 1st place every single time it is entered into an alternative fueled car show.

AL GORE himself worked at MTSU and had to see it, yet says NOTHING.

This is politics on both sides not one. BOTH have money yet to be made on us "mark's" as the Mafia would call us.

posted on May, 26 2014 @ 09:36 AM
link
I totally believe this artticle,eventually we are going to use up all the light from the sun and will have to borrow light from the nearest star.

In other news,I also believe this article from the same site:

Since the article seems to be a parody, maybe I can help in saving your thread...

posted on May, 26 2014 @ 10:10 AM
link
I know that it is a joke site and the claim of syphoning of power from the sun is ludicrous, but the kicker is in another thread about solar power someone (another poster) actually used that argument against building more solar. 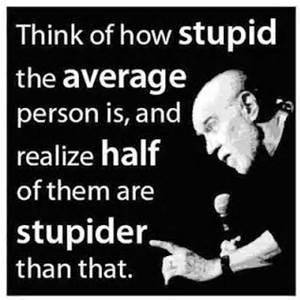 In March, Tim Stevens, editor at large at CNET, told CBS: "A site like TMZ makes maybe 100 million page views a month. Obviously, these fake sites aren't getting anywhere near that, but if they can get really a fraction of that, they can make tens of thousands of dollars off of one of these fake stories over just a couple of days.


Almost did a thread about it myself. I chose to highlight why a piece (of crap), like this would have been made in the first place. Halliburton, Peabody Energy and Arch have some serious assets to protect.

Wyoming is the nation's leading coal producing state and one of the largest producers in the world. They derive roughly 70 percent of its revenue from activities associated with energy production.


Peabody Energy opened the North Antelope mine in the heart of Wyoming's Powder River Basin in 1983. The Rochelle mine was opened in 1984. They were combined in 1999, making the largest coal mine in the United States.


The Black Thunder Coal Mine is a surface coal mine in the U.S. state of Wyoming, located in the Powder River Basin which contains one of the largest deposits of coal in the world. Black Thunder is the second most productive mine in the United States, providing the U.S. with eight percent of its coal supply.


And currently, with the acquisition of Jacobs Ranch Mine, Black Thunder is now the world's top coal producer. 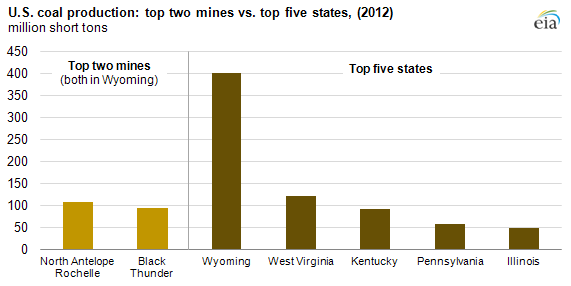 Peabody Energy Corporation (NYSE: BTU), is the largest private-sector coal company in the world. Its primary business consists of the mining, sale and distribution of coal, which is purchased for use in electricity generation and steelmaking. Peabody also markets, brokers and trades coal through offices in China, Australia, Germany, the United Kingdom, Indonesia, India, Singapore, and the United States.

Peabody markets coal to electricity generating and industrial customers in more than 25 nations on six continents.


Now, take a proper gander at this:

Can anybody dig up more info on this? The term they use is "forced photovoltaic drainage". As I figured, Google produced no such material.

The study was commissioned in August 2011 by the Halliburton corporation, who wanted to learn if the energy giant should start manufacturing and selling solar panels domestically and internationally. Halliburton’s executives wanted to know more about the sustainability of solar energy and how photovoltaic technology might evolve over the next ten years. But based on the findings of WIT’s research in the field, Halliburton revealed on Friday that they will not be entering the solar energy market.

“Put into laymen’s terms, the solar panels capture the sun’s energy, but pull on the sun over time, forcing more energy to be released than the sun is actually producing,” WIT claims in a scientific white paper published on Wednesday. “Imagine a waterfall, dumping water. But you aren’t catching the water in buckets, but rather sucking it in with a vacuum cleaner. Eventually, you’re going to suck in so much water that you drain the river above that waterfall completely.”


Halliburton, much like Monsanto, fund their own private studies. They are more interested in sustainability of their profits and not of the earth itself. Halliburton comes off as a company worried about sustainability but that vacuum cleaner analogy frightens me. To them, we are doing all the sucking.

“Solar panels destroying the sun could potentially be the worst man-made climate disaster in the history of the world, and Halliburton will not be taking part in that,” the company stated in a press release issued Friday morning. “It’s obvious, based on the findings of this neutral scientific research group, that humans needs to become more dependent on fossil fuels like oil and coal, not less. Because these so-called `green technologies’ are far more dangerous to the Earth than any hydrofracking operation or deep-water drilling station. What good is clean air when our very sun is no longer functional?” 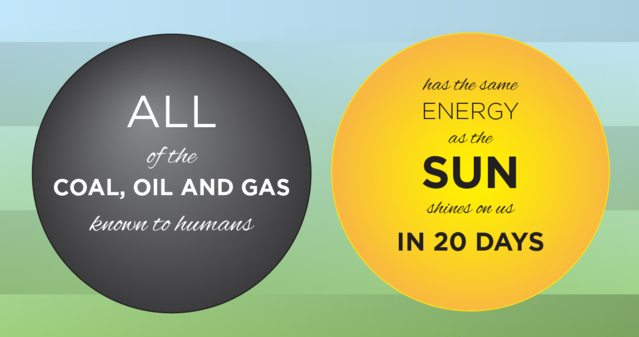 Don't believe the hype. Absolutely hilarious coming from Halliburton. We don't give a frack about the earth but thanks to our contributions to science we have determined solar power as a threat to humanity. Global warming isn't gaining the traction they wanted it to. And when going green, the first thing I think about it breaking our dependence on fossil fuels, one way being solar energy. It appears they have dug their own grave. I can't wait for the new solar absorption tax!

If every home in the world had solar panels on their roofs, global temperatures would drop by as much as thirty degrees over twenty years, and the sun could die out within three hundred to four hundred years.”

The Wyoming Board of Education decided recently that the Next Generation Science Standards need more review after questions were raised about how the standards address man-made global warming.

Halliburton recently joined the list of energy donors at the University of Wyoming with a $3 million gift that officials say underscores the close collaboration between the energy industry, state government, and the university.

Lesar noted that such collaborations rarely come to fruition in other states. “We struggle with making public-private partnerships work,” he said. “I talk to a lot of folks in a lot of states. We talk to a lot of universities, and generally they never get to anywhere but the discussion stage. Here, you guys get it done.”

posted on May, 26 2014 @ 12:13 PM
link
Hey there, just got home to my tablet expecting to be top news of the day on ATS, only to see that the ridiculous propaganda, was not even big oil propaganda but merely satirical humour/disinformation. Bugger, lol. My gf read me the article and I was peeing myself because I knew it was bull that solar panels drained the sun, so I asked her to send me the link on fbook, n then just copied it in and went about putting the thread together... I'm a bit disappointed really, I wish haliburton had made that up and not national report, I wasted about twenty minutes making that thread. Pish.

posted on May, 27 2014 @ 12:19 AM
link
Their empire wouldn't crumble, because people with that much money will use that money to involve themselves in any other area where money is to be made, even if that involves buying up anything and everything...including people, as you pointed out. I didn't look at their statements themselves, but if they really did say that we are draining the sun's energy, then I obviously think they are attempting to take advantage of people who are ignorant of physics. Although it doesn't take a specialized knowledge to realize just how absurd the entire idea is.

And denying the existence of global warming is just crazy. I can understand arguing over the causes of climate change, whether natural or manmade, but acting like ice caps aren't melting just shows an agenda. Clearly.

If you click on the Wyoming Institute of Technology link from the article there is a list of solar panels and solar related items for sale, could be ads but there is nothing on the website to click.... WIT....

posted on May, 27 2014 @ 04:54 PM
link
That must be a satire. Think the onion. Then again, those out of touch with america probably think the westboro baptist church is satire.