They're not gearing up for anything. They're also not buying A-10s, they're keeping them flying.

originally posted by: TDawg61
A couple of these things flew directly over head while I was in a small Michigan town.They were low...and LOUD!I could only imagine how fearsome they'd be with their cannons blazing.

Nothing sounds like the A-10's GAU being fired overhead.

It's much more like a very loud and fast burp or fart than a gun.

Combined with the sound of the turbofans it's a sensory overload situation.


Plus it makes you feel all warm and fuzzy knowing all that fury is only a radio call away.


I remember the first time they tried scrapping the A-10 when the Army stepped up and said they'd take them over.

Of course as soon as the Army wanted them the Air Force changed their minds.


If it doesn't fly really fast or isn't a drone the AF brass don't seem very interested in it anymore.
edit on 25-5-2014 by Hmmmmmmm because: (no reason given)

originally posted by: Biigs
I read an extremely long article on this yesterday.

It was madness for them to even consider scrapping the A-10, glad to see they came to their senses. Scrapping one of the most cost and generally effective close air support platforms ever? It may be 30 years old but it costs less than half what it costs to keep an A-10 in the air than it does a pointy fast mover - not to mention the troops love it and the enemy's totally hate it.

It can be upgraded with all sorts of additional weapon systems like air to air missiles and EW.

You hear that buzz of that chain gun [as an enemy], you crap your pants and hide.


OUTSTANDING.
This is also in keeping with the Corps long standing basic mentality-- the gear
may not be the newest and shiniest sometimes, but everything they pick off the
pile works great and forever. I'm glad for the guys on the ground that bird isn't
scrapped yet; there's a lot of places you just plain need a monster machine gun. 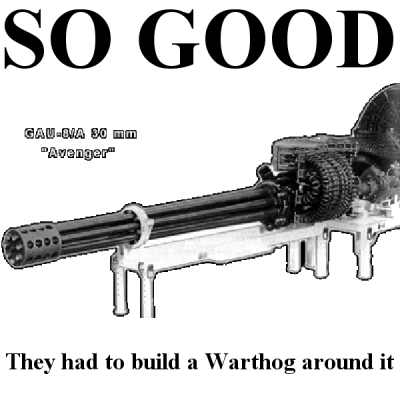 Up close and impersonal. 800 Coke bottle sized slugs a minute of Uranium smashing
the dirt and anything on it:
hey I'd be real uncomfortable even if the pilot's wearing the same utilities.

I have never understood why they wanted to scrap the A-10 in the first place. It is a tank with wings, engines mounted on top to keep out the sand in which they are used in, and the massive Gau-8 avenger, which will tear apart things much cheaper than a bomb. It reminds me of the old browning m2 .50bmg machine gun still in service. Sure it is old, but it WORKS, and works well.

Now on a side note, if we were to fight a war with a real military, with the same or similar tech as ours, then I can see where it may have some flaws as far as it's (relatively slow) speed, outdated tech, and lack of any stealth capability. But it is still a formidable aircraft as it stands. Plus the sound it makes when it flies over.. Priceless.
Firepiston

This is one area of government that makes absolutely no sense to me.

The military states what they need / want / to keep only to have politicians ignore them while pushing programs the military does not want. The military wants base consolidation and closure only to have Congress reject the suggestions.

At least some points get thru to congress on occasion.

posted on May, 25 2014 @ 08:07 PM
link
This is interesting. I think the Thunderbolt is a beastly ugly aircraft, but I know that those who pilot it love it. And it is still useful, which is the important thing. Even though it has been around for 40 years or so and was developed specifically for attacking armored vehicles and other ground-based targets, it has been so adaptable that it either is or can be used for a variety of missions. It is extremely maneuverable at lower speeds, which is not something that can be said for other aircraft of that size, and more importantly it does not need a lot of space for taking off or landing. That is always a plus, and just means there are more missions that it can accomplish.

I remember hearing they were going to retire it a while back, and I remember wondering what would take its place. I think keeping it around will prove highly beneficial for the myriad tasks that need to be performed in the modern US military. I always thought that those in command didn't like the aircraft very much, and never really thought it would have its life extended. I mean just look at the thing. It's old, slow, and ugly. I would bet that ground troops love it though, considering that its lack of speed and low-flying capabilities means it can engage ground targets to clear the way for those forward deployed. And it can rain down a hell-storm.

Consider what the aircraft can do, and then look at the price tag. It is extremely inexpensive compared with other aircraft projects, which is a great thing for saving money. And it is not like it is dangerous to fly, or that the pilots have to be worried about ground fire. They are protected by a casing of a strong metal, titanium I think, meaning they don't have to worry about fire from smaller arms while flying slow and low and raining down fire.

The project itself was only envisioned and created by the USAF because they wanted to retain their ground support role, which was in jeopardy at that time due to the Cheyenne attack helicopter. I imagine that the real motivator was a decrease in the funds that come with being cut out of such a role. I don't think they realized just how successful the aircraft would become, nor did they envision its longevity. I would bet that sentiments shifted regarding the A10 after these new wars in the Middle East. It proved useful there, in a MODERN setting, suggesting to some it should not be scrapped.

So in my opinion, with the capabilities of the aircraft and its low price, it is a no brainer. Why spend money on something newer and more expensive when this older piece of hardware performs just fine?
edit on 5/25/14 by JiggyPotamus because: (no reason given)

We are quickly approaching the point where the air force will be phased out in terms of earthly duties and pushed into space activity. The increased use of drones I think is proof of that. Drones leveled the playing field between the various branches of the armed forces.

Instead of losing a 70 million dollar aircraft and some pilots they will just lose a drone and a few missiles attached to it. The F-35 project reinforces my belief in that change over. the aircraft meets the needs of the air force, navy and marine corps, not to mention the allies who are part of the project.

Laser weaponry being deployed on aircraft and naval vessels.

Imo the current view of the world looks like the world when the machine gun was introduced. Effective at the time of its adoption but eventually it was refined to the point of being obsolete because of laser technology.

posted on May, 26 2014 @ 05:45 PM
link
Seriously, give the A-10 to the Army. They know how to use it. Secondly, the Air Force in Space, Please! There is only one way to have a full awake, rational being in an aircraft, over distant lands, the Navy Carriers. The Air Force has to pump their people up with chems, and the aircraft flying with multiple refuelings. Sailors know what it is like to be far from any help and on your own in a hostile landscape. The entire history of the Navy is based on that concept. While the Marines, the Navy infantry often supported by sailors, Corpsmen, Sea Bees, and even black shoe Tars, does it afloat, ashore, or airborne.

So what I don't understand is this: the A-10 is arguably one of the most effective and feared air weapons we have. We know it works. Why haven't we made it work better?

Take technology learned from its cousins and create a SuperHog. It's not rocket science, well, it is sort of. But its doable.

Some pie-in-the-sky suggestions. VTOL or vectoring control to allow the aircraft to come down even closer to targets then take off again. Or how about stealth (I'm sure somebody's thought of this) or even composite construction making them lighter and faster. The list goes on. I know, I know. If it ain't broke don't fix it. But if its on the chopping block, what's broke is the confidence. Help this plane out. Take it to the gym. We have the technology.

The very beginnings of the A-10 begun as an unnamed attack-fighter concept drawing (from Junkers) stolen from the Nazis during "Operation Paperclip" in WW2. So yea, the concept dated as far back as 1945 or even earlier!

USAF could certainly use another super German designers or they could hire me. I've never been beaten in an aircraft design competition yet (3 wins) and sadly, Lockheed Martin and Boeing may have copied my designs in their future aircraft concepts without my permission.

I'm starting to think that USAF has a knack for stealing ideas from whole countries or from other people.
edit on 27-5-2014 by ahnggk because: (no reason given)