What would Religious Prophets of the past such as Moses, Jesus, Mohammed, & Buddha think of Today ?

I say each and everyone of them would hate [or at least be very disdainful] of this world - This world of the 21st Century makes all the Profits of the past losers - they failed - What these profits attempted to do in enlightening Man and furthering civilization must be considered as a failure. Atheists will stare at religion and say see they kill each other in the name of God and this is the what God and religion stand for. I say this was never the intent or meaning of the religious paradigm and just because the prophets and religion failed to bring Man up from his often bestial nature, does not mean religion is the cause of man's endless historical darkness in his world - What do you say
edit on 25-5-2014 by AlienView because: (no reason given)

Different religions are taught by their own priests to literally exploit or hate other religions and the famous "They are opn the wrong path also to be utterly judgemental. So apart from killing each other there are a lot of steps before hand which inevitably lead to distrust, ignorance and murder.

I think you have to put your question slightly differently because any man from the time of the prophets would be terrified by what they see today. Judge the pace of life would put them literally on their backs - so comparison is not fair or possible. Corruption is probably at pretty much the same level as it was in their time, allowing for the population explosion.

Were prophets born today, they would either be treated like the celebrity TV religious men and women or gurus or be totally shunned as a nuisance.

Today more and more people are getting more into their own individual spirituality, rather than collective sheeple religious gatherings. I suspect if you asked how many Muslim men actually went to the Mosque for religion or to hear a talk, you would not get a 100% by any means, its just what they have been bred to do it and meet like an old boys network.

People are changing the way they think and what they value and despite what is going on in a few countries, where extremism is venting its pure poisonous hatred, fuelled by things that happened generations ago - and should be forgotten and forgiven; if you look at where people are integrated, they are happier helping their neighbour no matter what their religious persuasion is and usually respect the differences. Its only when the insurgent extremists get involved, usually at the behest of some individual or group, invariably safely hidden away, that sparks fly. Well time to move on.

posted on May, 25 2014 @ 04:55 AM
link
Moses - facepalm .. oy vey ..
Jesus - turn water to wine and have a drink ..
Mohammad - would kick the extremists arses for not following the true teachings of Islam.
Buddha - would say all life is suffering and meditate under a tree ..

posted on May, 25 2014 @ 04:56 AM
link
Jesus was not a prophet he is son of God, so for he would not hate this world as he allready knows this world, he would still love its people and understand them. Jesus is a prophet in Islam but not prophet to Christians.

posted on May, 25 2014 @ 05:30 AM
link
Its prophets not profits but these days theres businesses based on religion so perhaps its the right way of spelling it

originally posted by: dollukka Jesus is a prophet in Islam but not prophet to Christians.

Jesus is also "Messiah" in Islam, he is more than a prophet.

But more importantly, Jesus is described by his own companions as "a prophet, powerful in word and deed before God" in Luke 24. And that is AFTER his "resurrection". Jesus also indirectly called himself a prophet in Luke 13.

So Its strange how many Christians insist Jesus was not a prophet.

Let's see now...
Moses would have ended up working for the Hallmark people...they just love what he did with The Commandments...now they wanna see what he can do with a greeting card.
Jesus would be making a fortune for Ernest & Julio Gallo turning water into wine in a box.
Muhammed wouldn't be travelling to the States anytime soon as he keeps getting taken to the TSA "special room" for all that extra "love" everytime he flies.
And lastly...Buddha loves Mickey D's so much, he becomes their new spokesman:

"That's right, the McTibet is back but only for a limited time..."

So naturally, China will want to imprison him.

While i agree they may not be very happy about current standards in our world, I am certain they would not see failure and would certainly not hate if they are true beings of peace & love, They may feel great empathy at the loss of way in the world today.

Also it must be understood that these things work on much larger scales than our personal lifetimes, even thousands of years is a mere drop in the ocean.


'In great darkness One must strive to be as a beacon, guiding the lost back to there path'

I'm sure once Jesus noticed the money changers have grown several new tentacles, he'd go on a crusade against them. I wonder if he'd (if successful in his campaign) go even further, to the root of the issue.

I also think he'd turn his gaze to the many different christian denominations, and quite possibly undo them all.

originally posted by: AlienView
What would the Religious Prophets of the past such as Moses, Jesus, Mohammed, and Buddha think of Today"s World ?

If the history books are correct about those people ... and there is a big question as to if they are correct ... then we could project the following assumptions ...

Moses ... he was a smart guy and would use the worlds laws against itself. He would create a cult of like minded followers and grow his cult in the desert. His cult would be monotheistic, but deadly. A mish mash of healthy spirituality with the myopically minded cult mentality. He'd probably go to war and slaughter those who he disagreed with. Straight out wars ... not terrorist activities.

Exodus 32:26-29 - then Moses stood in the gate of the camp and said, “Who is on the Lord's side? Come to me.” And all the sons of Levi gathered around him. 27 And he said to them, “Thus says the Lord God of Israel, ‘Put your sword on your side each of you, and go to and fro from gate to gate throughout the camp, and each of you kill his brother and his companion and his neighbor.’” 28 And the sons of Levi did according to the word of Moses. And that day about three thousand men of the people fell. 29 And Moses said, “Today you have been ordained for the service of the Lord, each one at the cost of his son and of his brother, so that he might bestow a blessing upon you this day.”

Unable to gather a force of like minded religious extremists because he's Jewish, he'd eventually he'd be shot in a battle or droned dead.

Muhammad ... He'd gather forces of religious extremists and make a go of it. He would preach a mish mash of alleged monotheism strewn with the rites and practices of the pagans, Christians, Jews, etc, all the while gathering up weapons and munitions. He'd get support from the unwitting future dhimmis who would sympathize with him until it was too late. He would go to full scale war and slaughter those who he disagreed with while at the same time giving women as 'war booty'. Eventually, he and his forces would be nuked out.

If there are already back then they are probably in some remote location playing around with the spiritual energy flow that exists around us. Flapping butterfly wings to create the perfect karma storm.

Jesus would probably crucify himself without the help of Romans and Jews if he seen the state of the world today or he would open up the biggest can of whoop arse ever seen on the planet.

I'm sure once Jesus noticed the money changers have grown several new tentacles, he'd go on a crusade against them.

Then he would get his a** kicked like the last time he tried that. I think he's a little smarter than to make the same mistake twice.

All these different prophets may have their own way of seeing things and explaining them to their followers, but I think they would all have one thing in common if they came back today. They would all agree that the reset button needs to pushed. Things are too far gone on a global scale to fix in order for there to be peace and harmony worldwide.

They most likely would shake their heads in dismay that nothing they ever spoke of really came to pass as they said. And that all they had talked about never did any good.

originally posted by: Expat888
Moses - facepalm .. oy vey ..
Jesus - turn water to wine and have a drink ..
Mohammad - would kick the extremists arses for not following the true teachings of Islam.
Buddha - would say all life is suffering and meditate under a tree .. 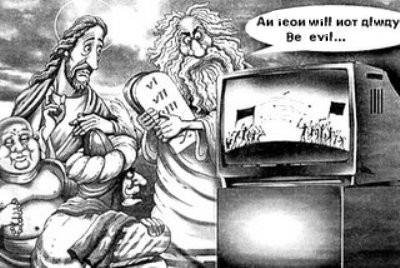 posted on May, 25 2014 @ 05:35 PM
link
Jesus is the only one on that list who said he'd be returning and he knew then that it wouldn't be happy. The Bible says what to expect, and it is most assuredly a violent ass-kicking:

Rev 1
‘Look, he is coming with the clouds,' and ‘every eye will see him, even those who pierced him’; and all peoples on earth ‘will mourn because of him.

Rev 19
With justice he judges and wages war. His eyes are like blazing fire, and on his head are many crowns. He has a name written on him that no one knows but he himself. He is dressed in a robe dipped in blood, and his name is the Word of God. The armies of heaven were following him, riding on white horses and dressed in fine linen, white and clean. Coming out of his mouth is a sharp sword with which to strike down the nations. ‘He will rule them with an iron rod.’ He treads the winepress of the fury of the wrath of God Almighty. On his robe and on his thigh he has this name written: King of Kings and Lord of Lords. And I saw an angel standing in the sun, who cried in a loud voice to all the birds flying in mid-air, ‘Come, gather together for the great supper of God, so that you may eat the flesh of kings, generals, and the mighty, of horses and their riders, and the flesh of all people, free and slave, great and small.’


So....war, blood, ruling with iron rods, everybody mourning, fury of the wrath of God Almighty, birds joining in to eat everyone's flesh. And then finally:


1 Cor 15
Then the end will come, when he hands over the kingdom to God the Father after he has destroyed all dominion, authority and power. For he must reign until he has put all his enemies under his feet.

Jesus makes very clear that he comes not for peace but to drive us against one another. So why then do you feel that he failed in any way. That peace you long for is detremental to your soul and allows you to retain no light and therefore never become a god like him and his daddy. It leaves you here to remain on this rock long after the rest have left the building. It is through suffering that we gain the ability to produce light for travel.