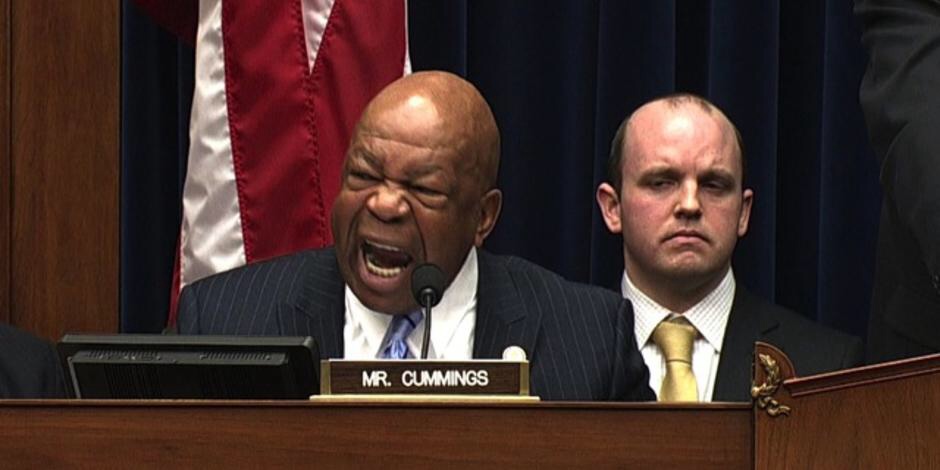 Elijah Cummings will be the ranking member for the Dems...

They say this event might get televised...I will definitely watch.

Nancy Pelosi also said two of the families do not want hearings.

posted on May, 21 2014 @ 02:13 PM
link
a reply to: whyamIhere
Cummings?
The guy that colluded with the IRS to do the exact things that he was tasked with investigating them for doing???

originally posted by: butcherguy
a reply to: whyamIhere
Cummings?
The guy that colluded with the IRS to do the exact things that he was tasked with investigating them for doing???

They don't get to make the rules.

My guess is they will walk out claiming its a Kangaroo Court.


I agree. Gowdy will not let them go on and on in lala land. Pelosi picked the puppets that her hands fit up their butts the best.

I hope it is televised. Pelosis' puppet brigade always put on a good show of how to not stay on topic in front of a camera.

This is a serious matter, they will try to derail it while spittle flies out of their mouths in indignation. Anyone who disagrees with some of them, will have the race card thrown in their face.

When Trey first started speaking in front of a camera, he appeared shy and somewhat uncomfortable.....he's grown into a full blown gladiator ready to take on anyone. This is gonna be a good investigation. Trey doesn't mince words.


Elijah Cummings will be the ranking member for the Dems...

Elijah is the same nut that went berserk a few months ago when he got "cut off" after a hearing (IRS) was closed when Lois Lerner took the 5th again.

He is a gem and definitely qualifies.

He can be the one to make "suggestions" about who to contact clandestinely.

At a girl ( I think) Nancy, appoint the top corrupt Dem's to attempt to derail this hearing with race baiting, lies and agenda measures straight out of the Marxist manual.

The idea of the truth coming out therefor exposing Obama and Hillary as the failures (at the very least) they are can not be exposed .

By the way, having heard the Embassy had a safe room tell me again why no one was sent to help, did they expect the ambassador and who ever else to stay in the safe room tell the attackers just went away...what am I missing here ?

posted on May, 21 2014 @ 02:29 PM
link
She is SUPPOSED to be naming people from her party! The current committee is GOP led and the GOP has already named the members of the Republican party.

After weeks of deliberating over whether to participate in a Republican-led panel that Democrats predict will be partisan, Pelosi announced the members who will round out the committee. House Speaker John Boehner already has appointed the seven Republican members.


Over the last 20 months, the facts and circumstances surrounding the September 11, 2012, attacks have received unprecedented scrutiny:

Pelosi picked the puppets that her hands fit up their butts the best.


Thanks for creating an ugly picture in my mind that will not go away quickly enough.
I guess I think too literally.

These are Hillary's watchdogs. This has a lot to do with her actions.

It should not be a circus with such a serious subject.

posted on May, 21 2014 @ 02:33 PM
link
Listen to the tone. They want dems in there to do damage control. Notice this was a non issue last week when they laughed at this subcommittee and called this a kangaroo court and now suddenly they want to be involved?

They are guilty and they know it, so they are running scared.

Its not the fact she is naming people , its the people she is naming to the committee...but then I think you already knew that Heretic.

Nobody said she should not send members to be fair.

I would like to know details about the death of Ambassador Stevens.

Information was redacted from the other investigations.

It was obtained via FOI. They left out many facts in the previous investigations.

The article you linked to did not mention this. Do you have a source?

originally posted by: Deny Arrogance
a reply to: whyamIhere
"Nancy Pelosi also said two of the families do not want hearings."

The article you linked to did not mention this. Do you have a source?

I watched the Pelosi Press Conference Live. That is where she said it.

I wanted a little more info on that. I could find nothing.

Nancy Pelosi also said two of the families do not want hearings.


I caught that too. She is trying to suggest to the American People that we dont need any hearings because the families have been hurt enough.. Boo Hoo sob cry tsk tsk. Yeah this may be sensitive to the family members of the folks who got murdered.. so what.. they don't have to watch the proceedings. This isn't for them, it's for US the American people as a whole to know the truth.

Like Jay keeps saying the words " Republican conspiracy theory" over and over as if to suggest to the American people this is all made up in someones head - well, thats Clearly SPIN because they are now so afraid of the findings they have to do damage control. I don't think most people even most citizens who are democrats believe this is all made up. They know the party is hiding something - it's too plain to see.

Heck I'm a registered democrat and I hate this party and they things they do. Thats the problem with jumping ship, you have to have a stable life raft to jump into or else your still gonna drown.. which the republicans nor other party can provide right now.

The administration promised transparency, and here you have it.

I wonder if they'll find any wrongdoing by Hillary..

originally posted by: whyamIhere
I watched the Pelosi Press Conference Live. That is where she said it..


Sometimes some people around here don't believe it when ATSers report back what the TV news is reporting. They think the internet links are the only source of info available out there. And sometimes what is said on TV isn't what is said at the links. They get flustered when it doesn't match ....

That being said .... I have no doubt that Pelosi will pick those who can stall and race bait and interfere as much as possible. That's her partisan M.O.

posted on May, 21 2014 @ 03:15 PM
link
If it's televised on FOX news they'll probably cut away to ads when the Democrats are asking the questions.

Chairman Gowdy prepares to gavel the proceedings to order

Biased much? And for Fox cutting away - softball games usually don't do well in the ratings.

That being said .... I have no doubt that Pelosi will pick those who can stall and race bait and interfere as much as possible. That's her partisan M.O.


edit on 21-5-2014 by ScientiaFortisDefendit because: That was a response to FlyersFan.. must have hit the wrong button?