MH370. Is there a concpiracy, yes I think so. An ABC Documentary.

The Documentary can be watched here

An excellent presentation that highlights the fundamentals of flight MH370. Those in the USA should tune out now.

I can say that it draws only one conclusion, that being, it was intentionally diverted from its' original flight path. Beyond that there are some truly staggering examples of human stupidity, ignorance and ego. There are also equal amounts of humanity, intelligence and self effacing people that make this documentary worth watching. I have to say that it's an absolute crying shame that such a thing as this should happen, but.?

Just started watching it, and it actually looks like a very serious and critical investigation into this incident, which is impressive for a mainstream show like this. I haven't really kept up with the whole MH370 subject, so I'm sure I will learn a lot from this doco. One of the weirdest things about this incident in my opinion is how they detected a signal in the black box range (I forget where they detected it but it was apparently coming from somewhere deep in the ocean). I remember the prime minister making a statement about it, saying that they had almost certainly found the location of the plane because there is nothing else under the ocean that could emit a frequency the same as a black box. But then a few days later it was like they never detected it, which I personally thought was quite strange.


It's probably only available to people in Australia. Try going through an Australian proxy. Or you might have luck finding it some where else, the title is "LOST: MH370" and it's a Four Corners episode.

It was covered very well.

I loved the Malaysian Defense Minister when he said, and I am paraphrasing, "Why send up a fighter if it was a passenger jet, we would not shoot down a passenger jet, America would but we wouldn't"

There are a lot of people with egg on their face.

Good to know Australia is still looking for the wreckage. 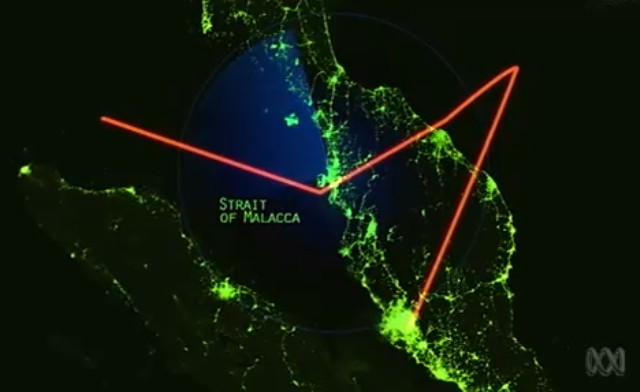 One aspect of that flight path immediately stands out to me; it turns around and appears to head right for that radar station (which I believe is a primary military radar station) and then as it reaches the station its path changes quite dramatically once again. That has to mean something... what, I do not know.

EDIT: it actually almost looks like a clock with two hands, that's kind of weird too.

EDIT: what's even weirder, I just tried lining up the image with a clock face and the time it appears to be showing is exactly 9:11 (it doesn't work the other way because the right most hand is too close to the 2).
edit on 19/5/2014 by ChaoticOrder because: (no reason given)


Good to know Australia is still looking for the wreckage.

Yeah, except that they're not.

I am downloading it from there now, as I cannot view it in my country and can't seem to get around it with any proxys at the moment.

*Edit* - Just finished downloading and it's all good
peace
edit on 19-5-2014 by TetsuoIronMan because: (no reason given)

All I can say, in light of this video, is that it's abundantly clear to me, now, that Malaysian Airlines and the military are cohorts in this conspiracy. I have no doubt that there was clear and deliberate malfeasance with regards to MH370, and that those who were supposed to prevent this from happening actually had a direct role in the disappearance of this airplane.

I find it beyond belief that this plane could have been allowed to fly directly over military radar as an unidentified flying object without some sort of response. Not even a phone call to someone about whose plane it is.... I find it just as mind boggling that for 30 minutes Malaysian Air, in response to air traffic control checking in with them about MH370 soon after it went off radar, provided coordinates of its location as being over Cambodian airspace- not once, not twice, but THREE different times! PROVIDED COORDINATES --- To only then retract it as an error based on approximates ...

The malaysian military knew right away that the plane had made this turn to fly back over its airspace toward the Straight of Malacca, yet fostered the initial search over the South China Sea for a whole week...perhaps to buy more time?

And the defense minister whose watch this happened on, he is at best an extremely shady character and at worst an accomplice to the deliberate disappearance of that plane... You can see it in the interviews.

I thought I was convinced that the plane must have went down, but with nary a sign of even a bolt from that aircraft, I think it's just as likely it landed and is being held at some remote place with all of the passengers for some unknown as of yet to be discovered reason...

As Pheonix358 noted "I loved the Malaysian Defense Minister when he said, and I am paraphrasing, "Why send up a fighter if it was a passenger jet, we would not shoot down a passenger jet, America would but we wouldn't"".

The defence minister is either a really nasty piece of work, or an imbecile that doesn't understand his own portfolio.

Yes indeed, that is the doco, although I doubt it will stay on YouTube very long.
edit on 19/5/2014 by ChaoticOrder because: (no reason given)

It is very clearly an American accent...If not American, I would say it still definitely is not the pilot or co-pilot - they both have distinctly different accents than the person who spoke...

(The co-pilot's voice can be heard at about 4:07. The pilot can be heard speaking at about 16:24 - where the show plays a video which he had put on Facebook).

This, to me, is a huge clue to something clandestine going on, and it's a shame someone didn't catch the distinction early on, they could have done voice analysis on the recording and at the least ruled out suspicion that it was a case of pilot suicide 'mission'...

posted on May, 19 2014 @ 10:08 PM
link
Scenario: - Post 911 - Jet with passengers on board makes a series of deliberate moves indicative of a hijacking. Plane then makes a turn for land that is both deliberate and completely off course.

Do you wait and see if the divergent plane slams into a populated area or high value target or do you smoke it? Afterwards do you really want to tell the world you just lost another plane due to a complicated plot that was missed by all of the intelligence agencies?

Or do you deny deny deny, send the searchers way off course, corral the executives at the places you deem involved in possible knowledge and tell them to shut up?

Were I the Government I would likely take the second plan, and I am a nice guy.......

It is very clearly an American accent...If not American, I would say it still definitely is not the pilot or co-pilot - they both have distinctly different accents than the person who spoke...


It's definitely not American, there's a very distinct Asian aspect to the voice speaking, but I do agree with you it sounds quite different from the voice of the pilot. Some type of voice analysis would be interesting...

Are you sure you listened to the right part? Because the way the speaker pronounces his 'r's sounds nothing like the accents of the Malaysians...

Listen specifically to the words "three seven zero" - first the air traffic control guy instructing the plane to switch to Vietnam air traffic control.
His 'r's are hard, "zero" is pronounced more like 'zeh-do' (the 'd' is soft), the guy responding from the cockpit uses a soft 'r' (rrr)...like the American ze-ro...

Yes I listened to the correct part... I don't know what to tell you, it's clearly an Asian accent. Trust me I can tell.
edit on 20/5/2014 by ChaoticOrder because: (no reason given)

posted on May, 20 2014 @ 01:18 AM
link
It seems like there was a lot of incompetency during the flight of MH370 which is questionable given that people that work in aviation and military are meant to be highly professional. The idea that the military had 40 minutes to identify it yet dismissed it is particularly troubling.

The data from Inmarsat, mentioned in the video is to be released publicly however, which is a positive step.

Satellite data to be released.