The Life and Crimes of Dick Cheney

posted on May, 15 2014 @ 09:20 PM
link
"Five Deferments" Dick Cheney is back, and this time he's defending torture! Jesse Ventura may be #OffTheGrid, but he isn't going to let Darth Cheney get away with it. The Governor runs down the Life and Crimes of the Ultimate Chickenhaw from his tenure at Halliburton to his time as Vice President right up to his recent justification of waterboarding. What do you think was Cheney's greatest offense?

Despite being too young to qualify, Halliburton awarded former Vice President Dick Cheney early retirement with a severance package of $36 million. And in this #OffTheGrid clip, Jesse Ventura is mad as hell about it!

What do you think about Jesse's perspective on Darth Cheney's Halliburton severance package? Do you agree or think there is something else going on?

You can also watch the full episode with all Darth Cheney's crimes on Ora.tv
edit on 15-5-2014 by OFFTHEGRID because: fix video

This is gonna be good. No one I have ever laid eyes on is more ominous than Lord Cheney.

What do you think about Jesse's perspective on Darth Cheney's Halliburton severance package?


Wasn't Heartless also in charge of the 911 Ops from the white house basement whilst George was lost somewhere over America?

And further, the one attending Lil' Georges sealed testimony at the white house before the 911 commission?

posted on May, 15 2014 @ 09:36 PM
link
Cheney had his humble beginnings in the Ford Whitehouse working with Don Rumsfeld. They came up with the "team B" Idea of estimating Soviet military capability that overplayed the threat badly trying to justify military spending. Mind you this was only a few years after Vietnam, the country was sick of war and wasn't going to pay extra.
Cheney is fundamental to developing the "unitary executive" idea whereby the President becomes Caesar simply by written fiat. The argument being since he's the commander in chief what he says goes in wartime.
He also brought us the move towards privatization of the military resulting in such wonderful things as private military contractors and even more money for the investor class.
The "1% doctrine" states that if you kill 1 bad guy but up to 99 innocents get killed too, that's ok, that's war for you and civilian casualties are inevitable. The man has no humanity left in him.
Let's not forget the waterboarding, that's alright too.
Just like all the other methods that drive men insane.
Then there's the other 50% of stuff he's done and we don't know about yet)
God help the Republic survive men like Cheney.
OOoooooOOoo

a reply to: OFFTHEGRID
Jesse Ventura may be #OffTheGrid, but he isn't going to let Darth Cheney get away with it.

but there is good in Darth Cheney ,,I have sensed it ....only through him can we learn the powers of the Darkside

Since Cheney's been out of office he doesn't really get the attention he deserves anymore... 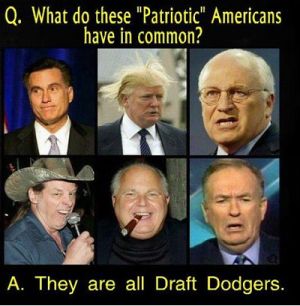 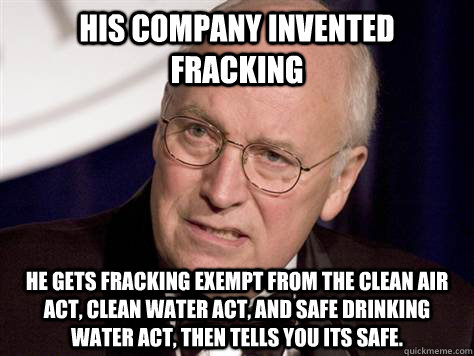 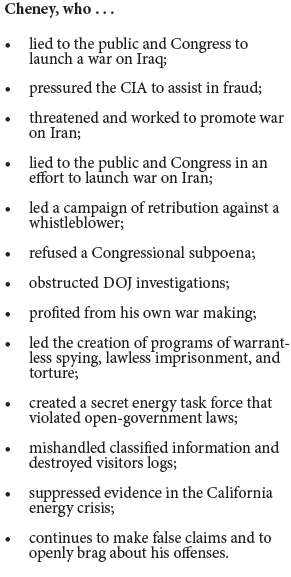 posted on May, 16 2014 @ 08:36 PM
link
To me his greatest crime was pushing a legal argument that a terrorist does not deserve the same rights as a prisoner of war. The intelligence - that a decision to label someone a "terrorist" - is based on, is kept classified and all roads lead through the military which is under control of the President - who, to Cheney - should have no restraint from congress.

That is a blueprint to protect the current power establishment (Bank Cartel) to squash ANY future resistance to their monopoly over human life. Before that, the law was still on our side. Now the law is of no consequence to government and the military that takes their orders.

Now all they need to is to expand the definition of "terrorist" to cover those that are anit-government, anti-bank, anti-democracy, or anti-anything that exacts unreasonable control over peoples lives. It hs already begun as I am sure many of you have noticed.

You make a great point. Certainly, those have been the results of what we’ve had since 9/11 and since Cheney and Bush were in there, and the policies that they carried forward. You’re exactly correct on the statements you’ve made. Now, is that the worst thing Cheney did? That’s debatable, as it always would be. But what’s interesting is, I think there’s a lot more bad things you can debate about Dick Cheney than good things.

posted on May, 28 2014 @ 04:45 PM
link
When Cheney nominated himself as Bush's VP I knew that the world, and America, was going to be in a world of hurt if he got elected. When he didn't get elected, but took the office anyway, Americans needed to tie-up the baby and let the grandmothers loose in the woods, because the historical "American way of life" changed from that moment on.


Jesse, thank you for being brave enough to poke Darth Cheney with your angry stick. Wish there were more world citizens brave enough to do this. I can tell you Jesse, that it seems like America is actually in the darkest period since the Civil War. Right now there is a fog of happiness. People are distracted by their Television, Fast Food, Sports, and local killings. I think Bush, Cheney, and their entire administration should be brought to court or a flogging party for their crimes against humanity.

Jesse.... you should run for president!

There wasn't even going to be a 9/11 commission. I mean for three years nothing happened; there was going to be no investigation. The amazing thing to me is George Bush simply told us what happened. And then of course the 9/11 commission rubber stamped it. I would just simply ask this...and here’s a question that needs to be answered and no one's ever given me a satisfactory answer...What happened in New York was mass murder and if Bin Laden indeed did it as they told us he did, then why wasn't he ever indicted for it? Again, we’re not following procedure. We’re not following the rule of law. These were murders that took place inside the United States, therefore they were not done by military, it was not a war, it was done allegedly by civilians hijacking civilian aircrafts and smashing them into buildings. And he was the mastermind, allegedly. Why wasn't he ever indicted? Why didn't they ever convene a grand jury, bring forth the evidence? Well, there's enough evidence here, there’s enough meat on the bone, we'll order an indictment for murder and that says there should be a trial. Why wasn't that done? Think about that – why wasn't it done? If it was such a slam dunk that Bin Laden did it, why wouldn't they have convened a grand jury and made it official? There is nothing on the record, officially, that Bin Laden did it. We were just told that. And as far as Bush and Cheney testifying, well, they weren't about to do that and they never will – testify to what they did and what they knew -- thats never going to happen. And it's because they are the President and the Vice President. I find that just bizarre that they are above all law and above all Constitution. Where does it say that in the Constitution that they hold those positions? It doesn't.

posted on May, 29 2014 @ 06:03 PM
link
Please don't stop at Cheney's profiting.. also go after Rumsfeld and his connection to the bird flu hype and him making $25 million thru his connection to Tamiflu/Roche Labs/Gilead Sciences! Former Secretary of State George Shultz was on the board of Gilead and profited from this as well.. that administration raped and tarnished our country.

What happened in New York was mass murder and if Bin Laden indeed did it as they told us he did, then why wasn't he ever indicted for it?


The million dollar question. I never though of that.

The very first indicator I had about the poorly written 911 script was Tom Brokaw mentioning Bin Laden that day. Remember that? Proof by the main stream media! No one ever looked back.The second was Bush and his bullhorn atop the smoldering rubble the next day swearing vengeance upon "those people".

What forensics? What independent verification? Say something three times on the news and it becomes fact. They played us like the TV audience we are from the very beginning.

You're so right the constitution does not give our elected representatives any mandate to supersede the rule of law. It is supposed to prevent that.

There is nothing on the record, officially, that Bin Laden did it.


I bout fell off my chair on that one. You are right. Wheres the forensics?

One day they'll say,"Oh, there was but the FBI burned those files to make room in the file cabinet."