Tell me what I should know about 'Border Collie' pup's 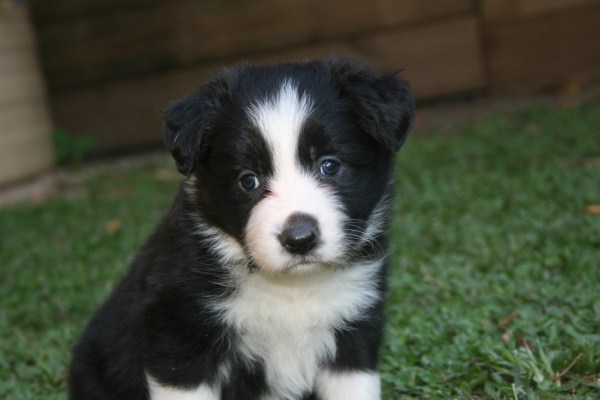 So yesterday, after school--- the parent of one my daughters classmates hands me this Border collie pup, saying she bought it-- but she's being picking on by the ladies older dogs. The puppy had to go and naturally my oldest girl was right there to give me those big puppy dog eyes of her own
"Please daddy please daddy..."
so now we have a pup--- leaving little puppy bombs mostly in the girls room.

Never had a Border Collie before--- All I know is there high energy working dogs... this little girl is defiantly a toe bitter too.
and I was just wondering if there's anything special I should know and their care?

Oh and at what age to do first give them their shots?
this little girl is only 5 weeks old--- That's to young right?

Any advice would be helpful so thanks in advance.

Very smart, very trainable and very expensive for a purebred.

That is purebred. I saw a Champion yesterday and it was amazing.

Try to get some papers...They might come in handy later on.

You just can't get a better family dog.

posted on Apr, 30 2014 @ 10:46 AM
link
Had to make a joke post first. But, seriously, high energy breeds can be really rough as puppies. Though, it will depend on individual temperament.

The shots are a hard thing... I would suggest either doing research into it yourself (you might find it interesting) or just ask your vet and do what they say. There are some interesting conspiracies out there that dont really get explored.

Let the pup be a pup for a while, and just reinforce some basic commands, house manners, social skills, etc. Make sure that the dog has positive encounters with all of these (thats important). Reinforcing the basic commands can be done very easily by simply associating normal actions with a verbal command. So, when they sit, lay down, etc. you can just say "good sit," or "good lay down." Or any command really, just make sure its consistent.

But for now, just try to put up boundaries that keep you sane.

edit: Start to be on the lookout for a "job" that you can give the pup when they get a bit older. It should be something that the pup does naturally, and you will usually see them trend towards some behavior. In your case, I would guess herding. Which, can be tricky if you dont actually have a herd, but there are ways to still get the same "work" without having such resources. For some, its tracking, some its as simple as "fetch."
edit on 30-4-2014 by Serdgiam because: (no reason given)
edit on 30-4-2014 by Serdgiam because: (no reason given)

From everything I can remember with my sisters dog, start training early! Try to devise some games, where she has to "find" the treat, things like that, to keep her mind busy.

She is so adorable!!!

I did get the papers---well sort of.
she bought this dog from a breeder and I got this packet of stuff I have to send into the AKC with a check to register her.

I wasn't planning on breeding her--- you know--- just keep her as a family pet.

Do ya think I should do it---get her AKC registered???

Second, they need a job. A task. Routine. They herd, so be prepared. They are awesome dogs that like to run.

As for dog bombs, kennel training them may make it easier to do. Though this breed is very smart.

posted on Apr, 30 2014 @ 10:59 AM
link
Get a 1/2 doz chickens for the back yard .She will keep herself busy trying to figure it all out lol cute pup and they are a great dog but I think they need space .If they have humans around most of the time they shouldn't get bored to the point of chewing up shoes and stuff .....

I hear that they may nip at kids shoes once in a while to move them along to where they are supposed to go. So just tell the dog you don't want your daughter talking to boys too long and what time your kids have to be home. It may take a while to train it but it's better than trying to train a teenager to come home....the dog can't give you excuses since it can't talk.

originally posted by: the2ofusr1
Get a 1/2 doz chickens for the back yard .She will keep herself busy trying to figure it all out lol cute pup and they are a great dog but I think they need space .If they have humans around most of the time they shouldn't get bored to the point of chewing up shoes and stuff .....

Yup we already had to do an emergency shoe removal.
and she's already had a not so nice run in with a not so happy to see her roster.
lucky he didn't get his spurs threw her fur... for now she just yaps at a distance but that old rosters day is coming.

They are one of the most intelligent and faithful dogs you will ever have the privilege of making part of your family. If they are purebred, they don't generally have very many health problems throughout their life. If they are mixed with other breeds, like German Shepherds, they can suffer from hip displacia and end up crippled, but that doesn't usually present itself until their twilight years. We had a border collie cross-bred with a wolf, he was a spectacular animal.

I'd say keep the dog, it's doubtful you will ever regret the companionship.

They need to be busy, they need to keep their brain busy.
They're really smart dogs and love challenging tasks.

Such cute puppies too

I did get the papers---well sort of.
she bought this dog from a breeder and I got this packet of stuff I have to send into the AKC with a check to register her.

I wasn't planning on breeding her--- you know--- just keep her as a family pet.

Do ya think I should do it---get her AKC registered???

She is so well marked. It is less than $100 bucks to get her AKC Registered.

If she turns out like I think she will....You and all your friends will want pups later.

Also, PM me if you can't potty train her...I can tell you how. Should be no problem.

Honestly, I'm envious of you!

1. Take her to the vet and talk with them about shots. I would only get the puppy shots and then later, yearly rabies and distemper shots. Get her spayed at about 6 months.

2. Potty training is best done with a crate. Read this thoroughly and bookmark it for future use.
www.inch.com...
Every time she potties in the house, she's learning that it's OK to do that. You have to get her outside before she potties, so you can praise her for eliminating outside. DON'T let her go in the house. Get up once or twice at night to take her out. A dog's bladder is small and can only "hold it" for her age in months, plus one hours. She's only one month old, so ideally, she should go out every two - three hours.

3. She young and her bones are developing, but once she gets to be about 6 months old, she'll need daily exercise and a job.

6. I have my dogs' papers, but I've never used them for anything. If she's just going to be a pet and not a show dog (and PLEASE tell me you're not going to breed her), I don't think I'd bother with it.

7. She's adorable and what's her name?

By the time she's 13--- I should have all the details worked out to build a large caliber self guided auto launching anti-boy doggy vest.

Now that you made me think about it--- forget obedience school--- this pup will be trained to be a ninja assassin!

originally posted by: whyamIhere
I would register her. You might change your mind. The pups from $1000 -$2000 in my area.

This is a horrible reason to breed a dog. Good breeders don't make any money because it's an expensive proposition. Unless the pedigree is known and the parents have been tested for hereditary diseases and conditions, you could be passing them along to the puppies.

For now her name is "Rosie"
and no I don't need the hassle of breading her.

Truth is I've only ever had shelter/rescue dogs before. Every one them have been great dogs.
True this his is my first pure breed--- but to me she's just another unwanted pup in need of a forever home.

I hope yours is quieter than mine. We have had a male Border Collie for about 6 years and HE NEVER SHUTS UP! He barks inside and outside, and at EVERYTHING! They are a great family dog though - just get a muffler for it .

He needs regular exercise and a job.

We've had her less than 24 hours.
right now she's doing that separation anxiety whimper at the door as she waits for my daughters to get home.

Other than giving a surly old roster a talking too--- she's been rather quite.