A new State Department document obtained by Judicial Watch ​via a FOIA request reveals that then White House Deputy Strategic Communications Adviser Ben Rhodes and other Obama administration public relations officials coordinated a campaign to “reinforce” President Obama's image and to portray the Benghazi consulate terrorist attack as being “rooted in an Internet video, and not a failure of policy.”

This scandal has grown far to public to be ignored and swept under the rug any longer. The information continues to pour out showing how guilty the administration is and how they've tried to whitewash the event and wash their hands of it time and time again.

This newly released email is something that cannot be ignored.

The main point of the White House team’s strategy was to paint the terrorist attack as being “rooted in an Internet video and not a failure of policy,” Judicial Watch said in an emailed release. Meanwhile, the State Department — at the same time that message was being shaped — initially considered the incident simply an “attack,” and perhaps even a kidnap try, the watchdog said.

A review of the Rhodes' email (shown below) shows it to be a possible "smoking gun" explaining how Ambassador Rice received the direction to blame the Benghazi attack on an internet video.

The email was sent two days before Susan Rice appeared on five of the Sunday news programs, Friday, September 14, 2012, at 8:09 p.m. with the subject line: “RE: PREP CALL with Susan, Saturday at 4:00 pm ET." indicating that Rhodes was dictating the political line that was used for the Ambassador Rice appearance. 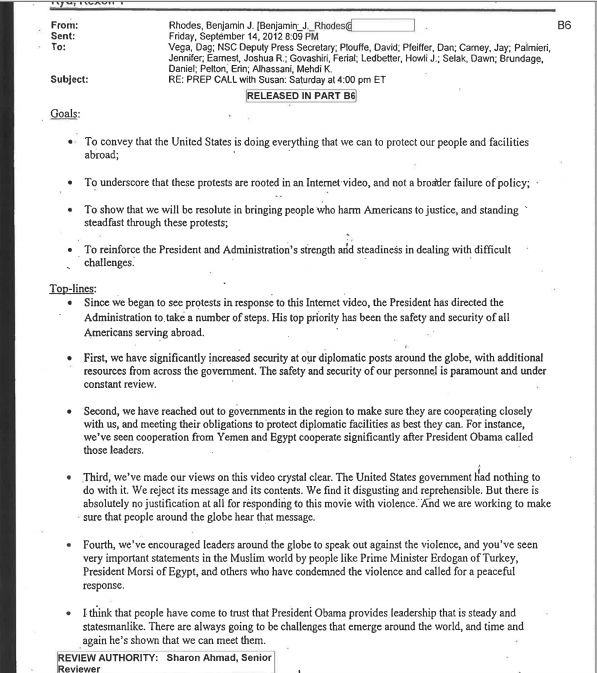 On Tuesday, an email obtained by the government watchdog Judicial Watch revealed that a senior American advisor informed then National Security Advisor Susan Rice to emphasize that the deadly 2012 attack on a U.S. consulate in Libya was the result of a spontaneous protest arising from an inflammatory YouTube video. Transcripts later revealed that senior defense officials had informed the administration on the night of the assault that the event was a "terrorist attack."

Among the goals Rhodes outlined for Rice was for her "to underscore that these protests are rooted in an internet video, and not a broader failure of policy."

Very interesting that more and more media have made some mention of it.

Thanks for letting me know, anon. I searched using title but did not find your thread.

I suppose this is fine, as it's okay for two threads as long as one is in BAN and the other in a different forum. 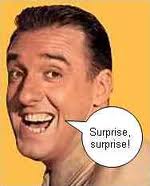 It is exactly what has been stated by many here.

Can someone point to a politician or group of them that don't lie (or worse) to cover up their frequent mistakes? Someone is going to mention Ron Paul, but are you sure RP doesn't lie to cover his mistakes? What if he did, would it matter?

It doesn't make it right, but controlling perception is the primary tactic of a politician and there is no ethical boundary that hasn't already been breached.

posted on Apr, 30 2014 @ 11:04 AM
link
I thought the Libyans killed Americans in their country because of what the Americans did to Libya vis-a-vis NATO?

Everything else is smoke and mirrors…

That's the beauty of the forum and posting system. We can identify them and put them on blast one-by-one, mistake by mistake. There is no singling out here. We just call it as we see it...time and time again.

Besides, this isn't one politician. This is an entire administration.

posted on Apr, 30 2014 @ 11:06 AM
link
Are they guilty? Yes. But Benghazi was small potatoes compared to the rape and plunder of Libya and the execution of Ghadhaffi. A once prosperous and peaceful nation laid to waste and put under fundamentalist Islamic rule. A crime of far greater magnitude imo that still needs addressing. How can we keep sending troops off to wars we don't even declare?
Hillary's hideous cackling over the Col's death needs to be remembered when it comes time for the '16 election (played over and over like Dean's wohoo moment)

That's the beauty of the forum and posting system. We can identify them and put them on blast one-by-one, mistake by mistake. There is no singling out here. We just call it as we see it...time and time again.

Besides, this isn't one politician. This is an entire administration.


Yep the entire administration is a utter failure on so many levels. Hilary was the backbone of this whole scandal. I should be surprised, but I'm really not...

I hope she doesn't run for president, and if she does and wins... We're all doomed... 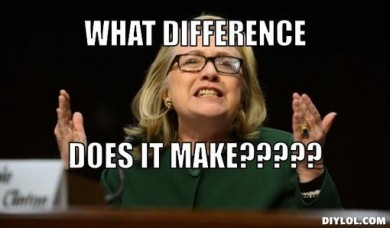 She looks kinda evil in that picture...

Oh wait she is evil, my bad. It's not just her looks.

posted on Apr, 30 2014 @ 02:13 PM
link
Just browsing throughout first pages of the released documents I noticed something conspicuous by its absence - the word terror. The attack is repeatedly referred to as "protest" or "protest that got out of hand."

Also it is far more critical and condemning of the film than the attack itself.

I wish these documents were available in an easily searchable format.

originally posted by: andy1972
Mistakes were made.
Ronald Reagan.
Address Before a Joint Session of Congress on the State of the Union
January 27, 1987

And Obama says 'Not a smidgen'.


The old trick distract the public with something else while they sweep it under the rug . You would think the rug couldn't hold it all. . Sometime the rug will hit its maximum hiding potential and nothing else will fit.

Carney said that talking points given to Ambassador Susan Rice to recite on talk shows following the Benghazi attack centered around protests in the Middle East, not specifically pertaining to Benghazi.

“If you look at that document, that document that we’re talking about today was about the overall environment in the Muslim world- the protests outside of Khartoum…These were big stories. These were- this was a big problem. And this was an ongoing story through that weekend when Ambassador Rice appeared in the Sunday shows,” Carney told Karl.

Fitton fired back at Carney’s blatant attempt to cover the Benghazi scandal up by lying about the emails, “We [Judicial Watch] didn’t ask for documents about protests everywhere in the world. We asked for Benghazi talking points, we got this document from the administration, from the State Dept. in response to a specific request about Benghazi documents.”

Yep the entire administration is a utter failure on so many levels. Hilary was the backbone of this whole scandal. I should be surprised, but I'm really not...


Isn't that the blatant truth! And... I think Billary's sole reason for taking a
few years off is so she can get "dry cleaned" with the passing of time.

She is like a huge malignant wart on the Democratic Party's face,
and a disgrace to this country.
edit on 30-4-2014 by burntheships because: (no reason given)

..in other news, poop smells bad, the weather will change and your team won or lost..

There is always a tail chasing super serious looming scandal ready to take down this guy, put that guy in jail.. expose this person.. before ya know it, years pass, dude is in the wind.. and nobody cares.

Once the ridiculous "official" story has been disseminated, one mans smoking guns becomes "the mans" conspiracy theory and / or bicker fodder for left vs right media pundit circle jerks... sponsored by corporate mofo inc