In the 1960s the archives of American baseball's American League were kindly and wonderfully mutilated by the team of the former president of the American League, Will Harridge, and his secretary, Mary. Mary would get requests in from the dozen or so baseball autograph collectors who knew of this private project (and most of the collectors would use various names, addresses of relatives, shady low-down lies like "I'm the president of my high school autograph club..." etc.) who would send in lists of autographs they would like. She'd go into the American League archives, find letters and other documents which matched the requests, cut off the signatures, and send them in the self-addressed envelopes provided.

Will Harridge had been president of the A.L. from 1931 to 1958, and was then put out to pasture. But he got to keep the cramped A.L. office in Chicago that the league had been situated in since maybe its formation in 1901, and the new A.L. president - Joe Cronin - got the new and larger office in New York. Will Harridge was left with the honorary title of Chairman of the A.L., but he was also left with.....the file cabinets containing the American League archives.

Snip snip. Mary would cut and send the autographs of hundreds of players and baseball executives. Just a few of the many treasures which went into the mail on a daily basis: Ban Johnson, Eddie Collins, K.M. Landis, Charles Comiskey, Connie Mack, Ed Barrow, Lou Gehrig, Al Simmons, all of the other club owners and umpires, players galore, and even such exotics as Grace Coolidge.

I learned this from someone I could trust like my own mother (either from my mother. or my father, myself, my uncle, my parents' friend, or in a dream - well, no, not in a dream). They no longer have many of the autographs, having gotten rid of them decades ago (sigh). And knowing about this, and having an interest in history, I really hope that Harridge and Mary kept the rest of the documents and letters in the files, and that they still exist - sans signatures - in the A.L. archives somewhere.

This historic news was broken, as far as I know, on a satire website I write on, uncyclopedia, when no one else would report on the story. In my tribute article on Will Harridge I mixed real information with some funny and incorrect information (Tesla inventing the film industry, which he may have done for all I know). I'll link that article here (not for clicks, the site doesn't "keep score" of visitors), but please only read this one page, as the site itself contains t*c violations (mods have told me that it's fine to link pages from there which don't contain these violations). This thread and that story are, as far as I know, the only two pages which mention this series of events...the loving actions of a very kind man and his very nice secretary:

(back in a few seconds with a clip, pun intended)

About twelve collectors knew about this backdoor route to looting the American League. They'd write a letter which looked like a grocery list, listing names of players and owners whose autographs they wanted: [[wikipedia:Lou Gehrig|Lou Gehrig]], Ban Johnson, [[wikipedia:Charles Comiskey|Charles Comiskey]], [[wikipedia:Eddie Collins|Eddie Collins]], [[wikipedia:Kenesaw Mountain Landis|Commissioner Kenesaw Mountain Landis]] (his signature almost a straight line, predating the athletes of today who scribble and loop their indecipherable names), [[wikipedia:Ed Barrow|Ed Barrow]], and scores of other stars and executives - almost all of whom were in the Hall of Fame.

The lists kept coming in, and Mary would sit at her desk, grab the historical documents of the American League, and with a song in her heart and a smile on her kindly face cut off the signatures with a pair of dime store scissors. With stately Will Harridge sitting at his old-timey desk in his old-timey suit in his very-old-timey office just a few feet from her, and with Mary snipping and clicking the hours away, the pristine archival history of the league was sent packing. For the autograph collectors it was the perfect time to be alive.

The great man himself, Will Harridge, in his younger and less gray-haired days: 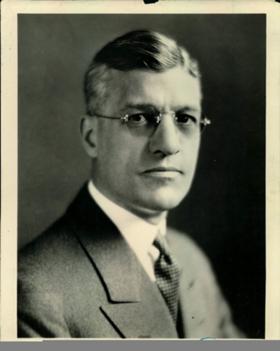 posted on Apr, 30 2014 @ 09:55 AM
link
Here are examples on the internet of some of the signatures very likely from the American League archives. To prove the point, what autograph collector worth their salt and in their right mind (or left brain) would own an entire letter written and signed by these Hall of Famers and then actually cut the signature off of it? Ah, sweet Mary (Will Harridge's secretary), thy name is legend.

First, Commissioner Kenesaw Mountain Landis' signature cut from, more than likely and I'd take heavy odd on it, one of the A.L. documents. He seems to have had an almost unreadable signature decades ahead of his time, although not half as bad as most sports "stars" now.

Here are more examples. These are the cut signatures of former player and general manager of the Boston Red Sox Eddie Collins (I don't know what he was vice-president of, maybe of the Red Sox?), Boston Red Sox and New York Yankee president Edward G. Barrow, the founder of the American League and its first president Ban Johson, and former player and Chicago White Sox owner Charles Comiskey. Many of these old-timey guys wrote beautiful script. 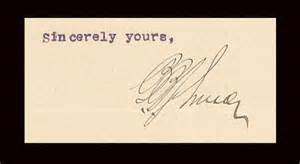 posted on Apr, 30 2014 @ 06:16 PM
link
bumping to see if anyone here at this time would have an interest in this. baseball was a passion back in the days that these people played the game....and now it's a business.

And isn't it nice how they all say "Yours truly" or "Yours very truly", or "Sincerely yours" ? When did that kind of sign-off go out of style?

posted on May, 1 2014 @ 11:34 PM
link
Since nobody wants to say a word about this, or has even looked at it (/does a little dance with a passing dog just to pass the time/) here is another paragraph from the listed source. Will Harridge and his secretary had been "retired" (read "fired") for a few years, but, having been given the bone of being named chairman of the American League, Harridge still kept the old office on Michigan Avenue in Chicago open while the big boys, Joe Cronin and his crew, now worked in New York. For some reason the Chicago office still held the archival files of the league. Will Harridge and his secretary Mary sat around for years with very little to do, until....

They went nuts. A benevolent nuts, like a loony-tune Robin Hood and loopy Maid Marion. Will and Mary decided to two-handidly destroy the accumulated documents, letters, records and manuscripts of the American League dating back to 1901 - the very heritage of one of the great American sports institutions - for the benefit of autograph collectors. They were wonderful people.