The World's Deadliest Animal: It may surprise you!

posted on Apr, 29 2014 @ 12:11 PM
link
According to this Bill Gates infographic, the mosquito beats out us humans as the world's deadliest animal. 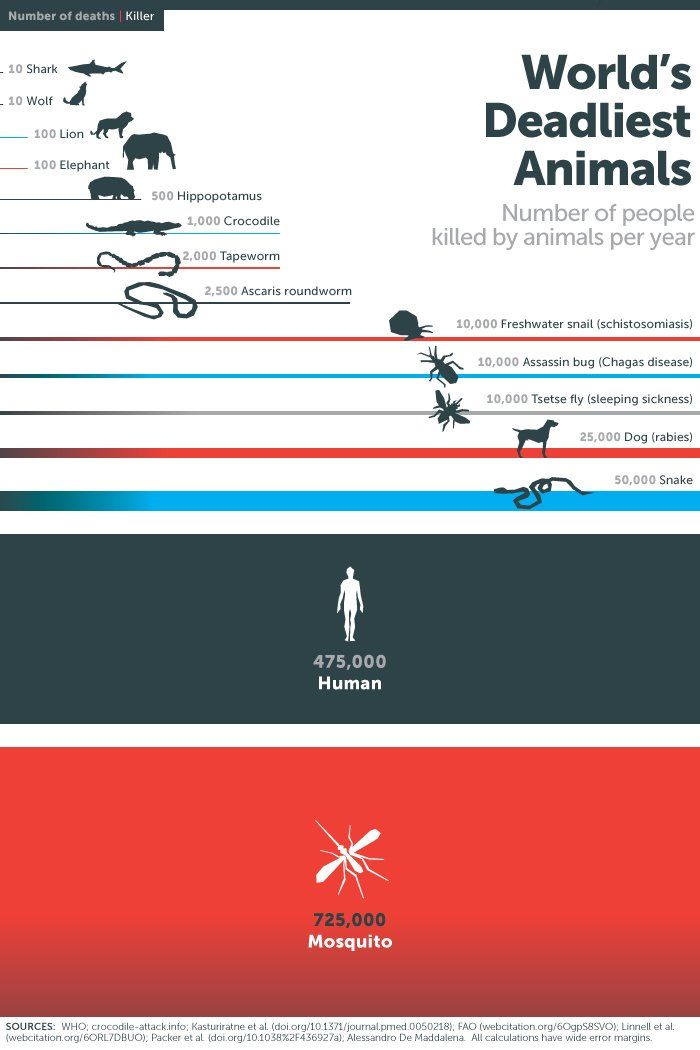 The graphic shows how many people are killed by each different animal per year. Mosquitos carry many diseases, giving them the number one ranking.


"The number of mosquito-caused deaths really is a mind-blowing thing. Other than humans killing humans during periods of war, most years, the mosquito wins," the Mosquito Week trailer says.

These mosquito-borne infections don't just kill — they debilitate millions of people. Sometimes these people can't work and can't support themselves. Billions of dollars in productivity is lost in places where these debilitating infections run rampant — fueled by mosquitoes.

I was just talking with someone about the amount of mosquitoes we are going to have here in the north woods of Wisconsin this year. We had 108 inches of snow this past winter smashing the previous record by 20 inches. Now we are getting a lot of rain. We are currently in the middle of a 6-day continuous rain. The ground is so saturated the rain water has no where to go, so there is a lot of standing water, creeks over running, and flooding rivers. Mosquitoes breed with water, so we are going to have a problem with them this summer. Although, here, we don't normally have to worry about diseases like Dengue fever. We do have to be concerned with West Nile Virus though.

The other concern is the White-Nose Syndrome disease that is wiping out the bats right now. I've grown up here in the woods and I can always remember many bats flying around over head, and although, I hated 'em, I remember always being told that the bats eat the skeeters.


White-nose syndrome (WNS) is an emergent disease of hibernating bats that has spread from the northeastern to the central United States at an alarming rate. Since the winter of 2007-2008, millions of insect-eating bats in 22 states and five Canadian provinces have died from this devastating disease. The disease is named for the white fungus, Pseudogymnoascus destructans, that infects skin of the muzzle, ears, and wings of hibernating bats.

It's been said that the disease is killing 90% of bats in caves where it has been found. This past year, the disease has spread to many states throughout the Midwestern United States, including Arkansas, Missouri, Illinois, and Wisconsin.

I don't recall seeing many bats last summer. I doubt I'll see many this summer, so I guess, I'm going to have to get used to swatting those nasty disease-carrying mosquitoes.
edit on 29-4-2014 by Rezlooper because: (no reason given)

It's not the mosquito that kills you. It's the contracted disease. It's not like mosquitoes are stabbing people with four foot long probosci or anything.

originally posted by: thisguyrighthere
These things always seem a little disingenuous to me.

It's not the mosquito that kills you. It's the contracted disease. It's not like mosquitoes are stabbing people with four foot long probosci or anything.

So, it's not the person that shoots you, it's the gun? The mosquito carried the disease that killed you, therefore, the mosquito infected you with the disease that resulted in your death. If I get Lyme's Disease, I blame it on the wood tick, not a natural force.

To bring it in more evenly, when malaria or giardia is contracted through unsanitary conditions are the people killed by dirty water or by feces? Honest question because I don't know how it's reported or tracked. Is it giardia that kills them or dirty water? If it's the water that kills them then I guess the mosquito can too. Cant forget cholera. Gotta love cholera.
edit on 29-4-2014 by thisguyrighthere because: (no reason given)

posted on Apr, 29 2014 @ 12:31 PM
link
Now that you mention it, I don't remember seeing as many bats here in Michigan last summer.
On the mosquito note: Back in 7th grade science, our teacher told us about a young boy, under 18, who's father was a sound engineer. This kid, played with his dads equipment all the time and experimented with it often. Our teacher told us that this young boy was able to find the resonant frequency for mosquito eggs under water.
For those who don't know, resonant frequency is like when an opera singer shatters a glass with his/her voice.
Anyway, this was years ago, and I never heard anything else about it. It sounded like a multimillion dollar idea to me.
On a side note: I thought this post was going to be about domesticated house cats. Somewhere, they had them ranked number one most vicious killer or something like that. It was because they killed for fun, not for food.
nice post though, very interesting stuff. I had no idea about the bat disease Along with this winter we had, there should be a lot of mosquitoes this summer.

Does every animal have malice when it kills, or could it be hungry?

In my book, Human is still the worst and most dangerous.

Most animal involved human deaths are probably the humans fault for playing stupid games, getting too close, feeding wild animals, not properly storing their food, wandering off trails, etc....

But that's just opinion. I don't really care to look up how many human deaths are caused directly by what animals.

If the WHO wants us to believe that mosquitoes are killing people then that's what we'll believe.

posted on Apr, 29 2014 @ 12:57 PM
link
It's a damn shame that in the 60's Malaria was almost wiped out with the use of DDT. How many people have died because somebody wrote a book based on flawed science and the director of a new Federal Agency decided to flaunt his new found power?

I think you're just looking at the infographic a little differently than I am. I look at it as yes, the disease is what kills you, but you wouldn't have caught that disease had it not been for the mosquito, therefore, the mosquito can be quite deadly.

I think it's bill gates. he has everyone's money

To bring it in more evenly, when malaria or giardia is contracted through unsanitary conditions are the people killed by dirty water or by feces? Honest question because I don't know how it's reported or tracked. Is it giardia that kills them or dirty water? If it's the water that kills them then I guess the mosquito can too. Cant forget cholera. Gotta love cholera.

I had giardia once. I can tell you that it is NOT fun. I was on a camping trip in the San Diego desert mountain area when it hit me about a week in to a 3 week trip. I can only guess I got it from a lake I was swimming in while in Wolfboro, NH a week prior and it waited until this trip to strike. I ended up burying/burning 2 sleeping bag liners, a pair of shorts, and no idea how much TP. I had to be helivac'd out to the local hospital for fluids and was finally able to fly home to Atlanta a few days later after taking Flagyl and something else. There were still residual bowel effects that had me carrying a couple rolls of TP with me in a backpack everywhere I went.

For those that don't know about it, uncontrollable bowels is one of the most terrible things I have ever had....literally you can pucker as hard as you can muster but it still releases.

Mosquitos are well just having a drinkl

posted on Apr, 29 2014 @ 01:53 PM
link
I've killed a lot of mosquitoes over the years. So have many people. We kill a hundred times more mosquitoes than they kill us.

The mosquito is the Al queda of the insect world.
It's using weapons of mass destruction.

Well, if you want to go all doomy and apocalyptic ... how about this? We have war and rumors (red horse), we have civil strife all over (white horse), now we have all these plagues (Ebola and MERS, MERSA, but even beyond we have two devastating crop plagues in citrus and bananas, a pig virus wiping out pork, a fungus taking out bats that eat mosquitos which happen to the vector for how many other happy fun diseases?) and the crop and food animal diseases can help lead to famine (black horse) ...

I think it's bill gates. he has everyone's money

Sorry guys, I messed up the source link in the OP. Here is the link to the story I used from Business Insider.