Princesses, and babies amoung Mummies found in Valley of the Kings

posted on Apr, 28 2014 @ 06:23 PM
link
A new Tomb has been discovered in Egypt containing about 50 ancient Egyptians some of which are children.

The embalmed remains of about fifty ancient Egyptians -- among them princesses, princes, and well-preserved infants from the time of the Pharaohs -- were discovered in a massive tomb in Luxor's Valley of the Kings, Egypt's Minister of Antiquities Dr. Mohamed Ibrahim said on Monday. Along with the mummies were wooden sarcophagi, funeral masks, and an abundance of mummification tools to prepare bodies for the afterlife. The owners of the tomb were relatives of 18th dynasty Kings Thutmose lV and Amenhotep lll, who ruled in the 14th century BC.

No conspiracy here. I just find this interesting. What says ATS?

I have a strong feeling that we will still be finding amazing things in Egypt over the next one hundred years, and probably far beyond that. Unless of course, Egypt suddenly becomes prone to massive earthquakes, or volcanoes, etc. that destroy any archaeological relics still to be discovered.

It will be fascinating to see just how much more history can be discovered and 'mapped out' by this tomb, in terms of the people in Egypt and how the power structures worked, etc.

The one thing that did sadden me a little was hearing how it had been looted. But that's par for the course I suppose...

Great find OP! Thanks for sharing.

Always love hearing about new finds coming out of Egypt. Imagine what's sitting in the Valley of the Kings awaiting discovery, more than we could imagine probably.
A picture from the tomb shows the disarray, it was looted several times unfortunately. This makes me so mad! 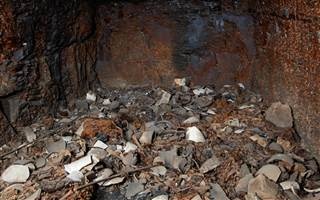 Another image showing the looted tomb with the head of a statue missing it's nose: 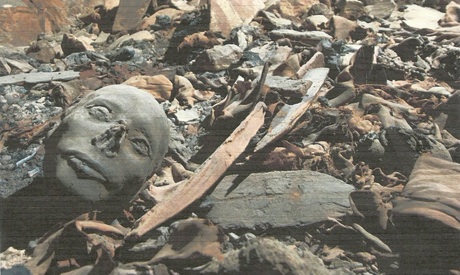 Death masks were also found beside the bodies. I wonder the condition these were in? It would be interesting to see what these women looked like.

Wooden coffins and death masks were found beside the bodies, probably dating from the New Kingdom, state news agency MENA quoted Ibrahim as saying, referring to Egypt's 18th, 19th and 20th dynasties between about 1567 and 1085 BC.

The names of 2 of the princesses are Ta-Im-Wag-Is and Neferonebo. There was also remains of a wooden wooden sarcophagi and a large collection of funerary objects. Exciting stuff.


Early studies reveal that the Heratic texts engraved on some of the clay pots found inside the tomb identify the names and titles of 30 deceased, among them the names of princesses mentioned for the first time – Ta-Im-Wag-Is and Neferonebo.