Exploration company believes it may have found MH370

originally posted by: Chamberf=6
Here's another article that includes the imaging from the company compared to MH370, it looks like a pretty close match--providing that the plane first made a water landing and didn't completely break apart.

It show the different metals and alloys detected and where those would correspond to locations on the plane.


I would agree...that looks quite promising actually.

posted on Apr, 29 2014 @ 03:55 PM
link
Quite a few critics of this because of the company's confidential tech and there is no actual evidence.

Gee, sounds just like those critics are talking about the official search

Well the Malaysian government's handling of this and the way they just happen to just "suddenly" have more recordings,
release conflicting information at times,
and overall seem to be withholding something--at the very least not being very forthcoming or even that cooperative in all this deserves some criticism.

wow that was a long run-on sentence.

You know what solid evidence have they provided?

posted on Apr, 29 2014 @ 04:27 PM
link
One thing I note is in the pictures of the data it seems to be aligned due north/south, assuming there north arrow is true. I would think odds would go against that happening but it's possible.

Just a couple of thoughts about those images.

I thought that the plane looks to be pointing to the south, until I considered why I thought that. It is only because the plane graphic points that way. It could be also be pointing the other way, towards the north. That would make the two engine blobs, which to my eyes seemed to be a little too far infront of the leading wing edge, appear behind the wings. Exactly as expected, as I understand the engines are designed to absorb a lot of the impact and break off when crash landing, thus ending up behind the wings. If the water was shallowish, thus not far to sink and they did their job they may well not be that far from the main plane body and wings.

It is also possible, I suppose that there is some general distortion in the image, due to currents, water temperatures etc etc, which we do not know about and could effect whatever the readings are showing?

Is not this location also where one or two of the Northern "ping (Not black box pings.)" rings were thought possible? I think Immersat did not say for definite the Southern route was the path, only that it was a more likely one, which was taken up by the Malaysian authorities among others?

If the plane had remained basically intact maybe that explains the lack of any tangible evidence, a reward might help find some.

No doubt this is all tosh and the thing is in the Indian Ocean a "full fathom five" deep. I just hope that their suffering was brief and some good will come of this tragic event.

I wonder how accurate the graphic really is. My guess is someone will go find out what is down there.

Pings - Changed to - who knows...is any off it even right.

posted on Apr, 29 2014 @ 07:28 PM
link
I see nothing wrong with what they say. The argument is really what it was from the beginning, how accurate was the projected travel paths in the first place? what if Armasat didn't get it quite right and instead of a small arc North-South, just a big fecking ring right round, or rather a series of rings all according to how fast how slow the plane was flying. Use the needle of a school compass and stick it anywhere in the line of the ring.. and you could be right.
Eg; in the first week of April it was announced that the 'partial' last ping from the aircraft was in the general area of the later pings heard that were thought to be from the aircraft's black box, that is about at close as anyone got to some kind of triangulation, and they found..nothing!
Now this company on a different tack, finds something that could well be man made in a different area, still within the circle/s, very far away up North, but with the right credentials to identify man made materials and no one is paying much attention, Why? the big names have already talked the big talk and produced nothing.
What about the Maldives sightings of a low flying jet? forget about it, the Maldive police said they were all lying, [but forgive them] my words, since nobody is going to the poky. What about the two Iranians, was it really so easy for them to get on board with false passports just about anywhere, or just Malaysia? only two answers to that, yes or no. Applied Psychology along with technology might have the desired outcome that no applies to anywhere, and yes applies to Malaysia. My guess is that question is moot.

...I think Immersat did not say for definite the Southern route was the path, only that it was a more likely one, which was taken up by the Malaysian authorities among others?


Well - if they didn't say "Definitely", they sure did a lot of grandstanding on their groundbreaking, history-making efforts (and results).
They said that they compared prior (recent) 'ping' signatures of flights taking the northern route and those taking the southern route - and the differences between the two routes were significant enough that they could be certain that the 'pings' of MH370 matched the southern route.

posted on Apr, 29 2014 @ 08:49 PM
link
The north of the Bay of Bengal is right at the edge of the possible locations area based on the first and last pings.

It's along the early pings distance. Quite a bit of tech discussion in the comments at the link.

posted on Apr, 29 2014 @ 09:48 PM
link
The company also claimed to have found the Soviet ship Armenia (sink by the Luftwaffe in 1941)....but apparently they forgot to tell archaeologists actually working in the Black Sea who were still looking for it in 2013

they supposedly have 20 un-named technologies, one un-named methodology, 47 un-named scientists, 5 un-named professors, and 12 un-named PhDs all from un-named institutions?

BS meter is hitting the top end of the scale here......

Edit to add: The web archive shows that GeoResonance.com used to be a holistic healing site (see /tinyurl.com/kgsb62f (put a http in front of that....- it doesn't want to link for me), became "remote sensing" in 2013, "Precise deposit location" in Feb 2014, and its current form some time more recently - I'm not entirely sure I'm reading the dates correctly.

originally posted by: Dorrell
How about the Chris Bollyn investigation which makes more sense?!

...It's a big article and makes a hell of a lot of sense!


Whether there's anything to the story, or not - I don't know, and wouldn't even venture a guess...
But
That story is dated March 26, 2014, and beginning around March 23, 2014, members Mikeultra and UKGuy1805 carried a fairly lengthy discussion regarding the GA Telesis 'connection' in the original thread regarding the missing flight, found here.
Makes you wonder how many journalists follow discussions on these boards to find new angles to explore.

originally posted by: Aloysius the Gaul
The company also claimed to have found the Soviet ship Armenia (sink by the Luftwaffe in 1941)....but apparently they forgot to tell archaeologists actually working in the Black Sea who were still looking for it in 2013...they supposedly have 20 un-named technologies, one un-named methodology, 47 un-named scientists, 5 un-named professors, and 12 un-named PhDs all from un-named institutions?

Interesting find.
Thanks for the info!

posted on Apr, 29 2014 @ 11:00 PM
link
It may be just BS but domains do get dropped/reassigned and transferred. It seems the officials don't think much of it.

posted on Apr, 29 2014 @ 11:21 PM
link
It seems that those in charge of the search are afraid to face the fact that they might be WAY off target. So much money spent and so many man-hours invested. Some of the brightest minds and highest public officials across several countries committed all these resources to the current search area.

If the plane turns up ANYWHERE but the current search area, there will be high prices to pay career-wise, mentally and financially. It will be the steroid version of Egg-On-Face.

A private company said it had found what it believes is wreckage of a plane in the Bay of Bengal that should be investigated as potential debris from missing Malaysia Airlines Flight MH370, but the possibility was dismissed by search coordinators.


It seems a bit arrogant to me that this was just "dismissed" it! What's even worse, this was reported a while ago. From the same article:


GeoResonance said it had passed on the information to Malaysian Airlines and the Malaysian and Chinese embassies in Australia on March 31, and to the JACC on April 4.


Wow, that's a month ago and no one took it seriously. I guess, as already mentioned, so much money and time has been spent searching an area far away from Bay of Bengal they don't want to now search anywhere else.

originally posted by: Mamatus
Just one question. Why was the lead not followed up on while the black box was still pinging?

An initial report was sent to authorities while the black box still had two weeks of battery power. The team then verified its findings by analysing images from the same area on March 5, three days before the plane disappeared. “The wreckage wasn’t there prior to the disappearance of MH370,” Mr Pope said. The full report was delivered on April 15.

Hopefully it is found. However my question remains: Why did no one from the search teams follow up on the lead? this IMO is flat out odd.

Because there is whole load of money to be made from deep sea "search and recovery". Since there isn't any other wars going on, all the defence companies are now jumping on the "systems to aid in the search for flight MH370" market.

The company GeoResonance has been metabunked already. They don't have their own satellites, but only use publicly available data.

Multispectral imaging would only work if the aircraft or satellite had a direct line of sight to the aircraft. Gamma irradiation and X-rays would only work if you were within 1000 metres of what you were looking for. Magnetic field detection would be the only technology left that could work from the air (they used such systems to detect distortion in the Earth's magnetic field due to the presence of a large metal object. Even degaussed, it would then block the field lines and change the shape of the local magnetic field).

The only other theoretical technologies would be gravitometric measurements, like the GOCE satellites.

Maybe the electric fields generated from the planes components and parts would attract wildlife like sharks.
edit on 30-4-2014 by stormcell because: (no reason given)

It seems a bit arrogant to me that this was just "dismissed" it! What's even worse, this was reported a while ago. From the same article:


GeoResonance said it had passed on the information to Malaysian Airlines and the Malaysian and Chinese embassies in Australia on March 31, and to the JACC on April 4.


Wow, that's a month ago and no one took it seriously. I guess, as already mentioned, so much money and time has been spent searching an area far away from Bay of Bengal they don't want to now search anywhere else.

More reading on the 'ring thing' from author Duncan Steel. He too is doubtful about Inmarsat's calculations.

BTW, there should be an update from yesterday on that link showing the recorded graph of the 'pings' seemingly released by Malaysian officials. 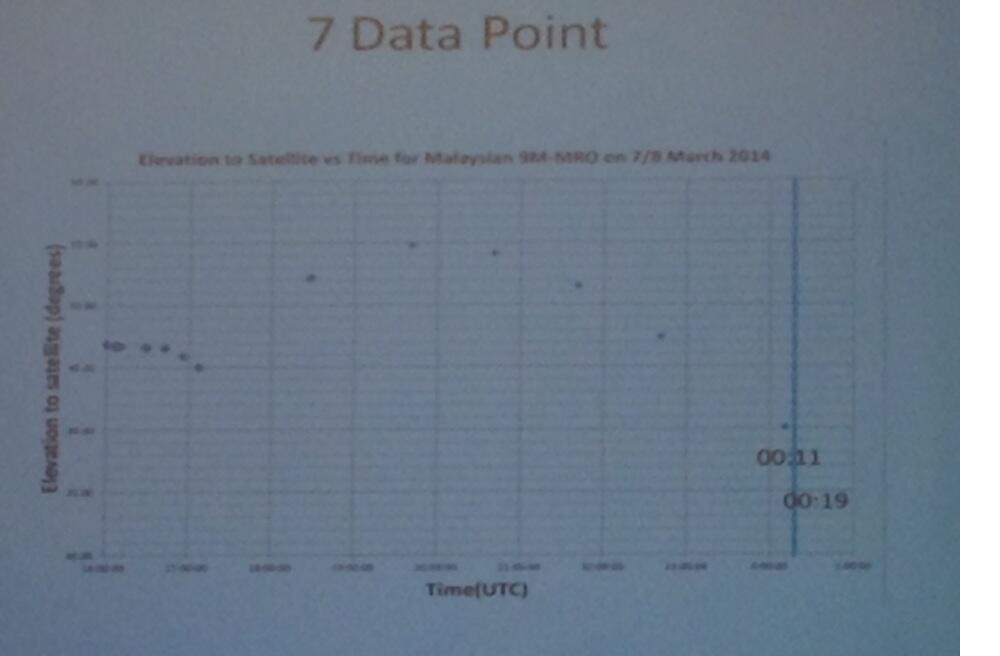 just a kilometer deep and still no word on it from the Bengal navy...