Fetuses May Get 'Stand Your Ground' Rights

posted on Apr, 28 2014 @ 02:47 AM
link
Okie Dokie... Filed somewhere under the heading of "Redundancy for the sake of duplication of effort and being sure" we find this story working it's way up from the abyss of 'What the heck?!'

COLUMBIA, S.C. (CN) - Unborn children would receive constitutional rights beginning at conception under a "Stand Your Ground" law that allows women in South Carolina to use lethal force against anyone threatening their fetuses.

The South Carolina Senate Judiciary Subcommittee voted 3-2 this month to expand the state's "Stand Your Ground" law to include protections for unborn babies.

Okay, what am I missing here? It must be something HUGE. See.. I imagine an unborn fetus. Then I imagine a pregnant woman. Everyone following so far? Okay.. I figured.

So, unboard baby is onboard the mother, so to speak. One is the other and they are one...yes?

So...HOW in the name of common sense can the defense of the fetus be a separate issue to legislate?!

Was the mother simply going to stand there and be murdered without defense, if not for permission to act in defense of her unborn child??

There are a fwe bills apparenrly working their way through what passes for a State House in that state these days. The opinions against them aren't kind.

"These bills like to define a human being as a 'person' at fertilization, which would create a variety of restrictions that would limit the reproductive and family building choices of hundreds of thousands of South Carolina residents," said Dr. Michael Slowey, a reproductive endocrinologist and founder of Coastal Fertility Specialists in Mount Pleasant. "Specifically, these bills would put an end to our ability to perform in-vitro fertilization, provide contraception and effectively treat abnormal pregnancies, including life-threatening ectopic pregnancies."

I think I'm still hung up on that whole need for 'Stand Your Ground' to a fetus, as if Mom was suicidal to fail in defending HERSELF. If she wouldn't, then this law won't add courage or backbone or just plain physical ability where it didn't exist before. So...

WHY ATS?! Just.....WHY?? This is a step beyond Political Madness. It's Political Ignorance worn like a badge of honor and kept shiny for display.

This is absent of any kind of sense. ANY.

I think this if set as a precedent may be able to be used against abortion, no?

If they have rights, they are a person. If he/she is a person, they cannot be murdered legally. AMIRITE?!

I guess it really depends on the state law and how it's written for lethal force in defense. In this state it's reasonable fear of death OR great bodily injury. Well...Great bodily injury is coming before or at the same time as whatever extreme could cause a miscarriage.

It's possible South Carolina's defense laws are not near as reasonable. Can someone living there shed some light on that?

posted on Apr, 28 2014 @ 04:13 AM
link
Its pretty clear, its for a women right to defend not just her life, but to prevent injury to her stomach area while pregnant.

Things like hitting a women near it, or threatening, now could escalate to a self defense, with out the Women being afraid of facing murder charges there.


But, its an interesting dichotomy of law isn't it?

The fetus only matters as long as the female parent cares...

Can the baby shoot through the Mothers tummy to take down an attacker.

Historically in the US, you can do anything as long as it is not against the Law.

In the former USSR, you can only do what the law allows.

How long will it take before you in America get to that stage.

You know if they pass this, then children can also claim stand your ground. I can see a lot of bullies getting wasted on the playground. By extension, the Second Amendment now applies to toddlers. Two year olds with Uzis.

posted on Apr, 28 2014 @ 07:34 AM
link
You can tell elections are coming up. Tis the season for exaggerated stories about race, guns, abortion, "stand your ground", and other topics meant to divide the electorate and compel people to get out and vote against that evil other party.

Stories like NSA spying, corruption in both parties, and the like, will get short shrift. The people need to be divided by nonsense rather than united by real issues.

posted on Apr, 28 2014 @ 07:35 AM
link
How on earth can an unborn fetus be reason to legislate further when it's been pretty well covered and protected already you ask?.

Well I think it's just smart (devious) people masquerading as stupid people to appease the idiot masses while simultaneously depriving them of the few rights they still have.

Our rights are being nitpicked and diluted away constantly by a bunch of devious people to benefit themselves at our expense, anyone who thinks an unborn child that supposedly possesses "stand your ground rights" won't be held against mothers carrying unborn children is pretty damn ignorant.

Most overly sensitive moron American's will accept any horse# legislation when it has anything to do with protecting children, even when in reality, it doesn't.

Do a bit of research to find out who the people are that want this legislation passed, the one's paying to have it written and passed and you will know the true purpose of it.

It's about starting up a new market like anything else, everything is about finding a new market even if the market has to be created like in Frankenstein style, bits and pieces of rancid legislation contrived and woven together for purposes which have absolutely nothing to do with protecting anything but someone's bottom line.

Never mind nobody is really protected in any real way unless it is to protect someone's bottom line.../

posted on Apr, 28 2014 @ 07:38 AM
link
I would imagine this could be applied if someone was trying to kill the unborn child and not the mother ... like what happened to the three women who were held captive for 10 years. (was it in Ohio? Can't remember). But isn't this kind of a redundant? I mean, the woman would be standing her ground for her own health/life anyways?? I dunno ... I guess I'll just have to watch this one. I'm not following the logic of it all ...

posted on Apr, 28 2014 @ 08:37 AM
link
Think about corporate personhood, then think about the rights of an unborn human that isn't really actually a person, has no real rights, a minor...

Think about a man and a woman who already have a natural interest in preserving the child for the natural reason of reproduction.

Think about an unborn child which is now part of the interest of the state, realize there are plentiful protections of that child beginning with the parents already and everything reasonable to protect that child has already been taken into an account.

Think about the fact some things just can't be protected regardless of what measures one may take.

I find that attempting to give an unborn fetus "stand your ground" rights to be very disturbing, downright dangerous really, considering the real flesh and blood person is not really considered able to reason until it is 7 years old, and has no real rights until it is 21 years old, and then we have giant corporations which seem to think they are entitled to (personhood) the same protections we are entitled to even though they are legal fictions and do not exist anywhere but on paper.

This story and thread gives me the creeps big-time.

How long do you figure it will take for a legal-fiction, non-person which claims personhood but isn't a person at all in any real sense to want "stand your ground rights" ?.

What a nefarious way from the law makers AKA fetuses religious rights advocates to push a law to try and finally give human rights to unborn fetuses to be able to push banning of abortions in that state in the base of murder, the whole issue that anti abortionist has been trying to do for a long time with no success, now they are dressing the same law under stand you grounds to sugar coat the main agenda, get that personhood to the fetus from conception.

This law has nothing to do with stand your grounds this is about getting that eluding personhood to fetuses from conception, this will make a murder to kill another human being AKA abortion of a fetus

but of course my # 1 question for anyone supporting this is :

please supply the precendents , wherein existing laws did not allow a successful claim of " defence intervention " in response to a targeted attack against a foetus to use whatever force was needed to halt the attack "

When I saw your title, I imagined a fetus with a cocked and loaded pistol, a 'la Stewie Griffin.

Beyond that this is just insane.

posted on Apr, 28 2014 @ 10:01 AM
link
There will be no precedence supplied because they are trying to set precedence.

Religion and state are the same guys working for the same guy, who that may be is anybody's guess, but the fact that some royal bitch is pregnant with twins right now may have something to do with who it may be.

Nothing ever changes but the names of things to confuse the commoner and keep him from seeing he is in fact a slave (serf / subject).

Or maybe I just think too much.

posted on Apr, 28 2014 @ 10:04 AM
link
Insanity on a stick can be found pretty easily in a lot of southern states, and it's spreading everywhere.

"Yes, your Honor, I feared that baby's life was in immediate danger. That the man (points to abortion clinic doctor) was definitely to kill it. And only I could prevent it from happening. No one else could arrive in time to save that baby's life. I tried to prevent him with the threat of lethal force. It was then that he made a sudden movement towards me and I shot in fear for my own life."

They have been making a lot of advances in fetal firearm implantation. 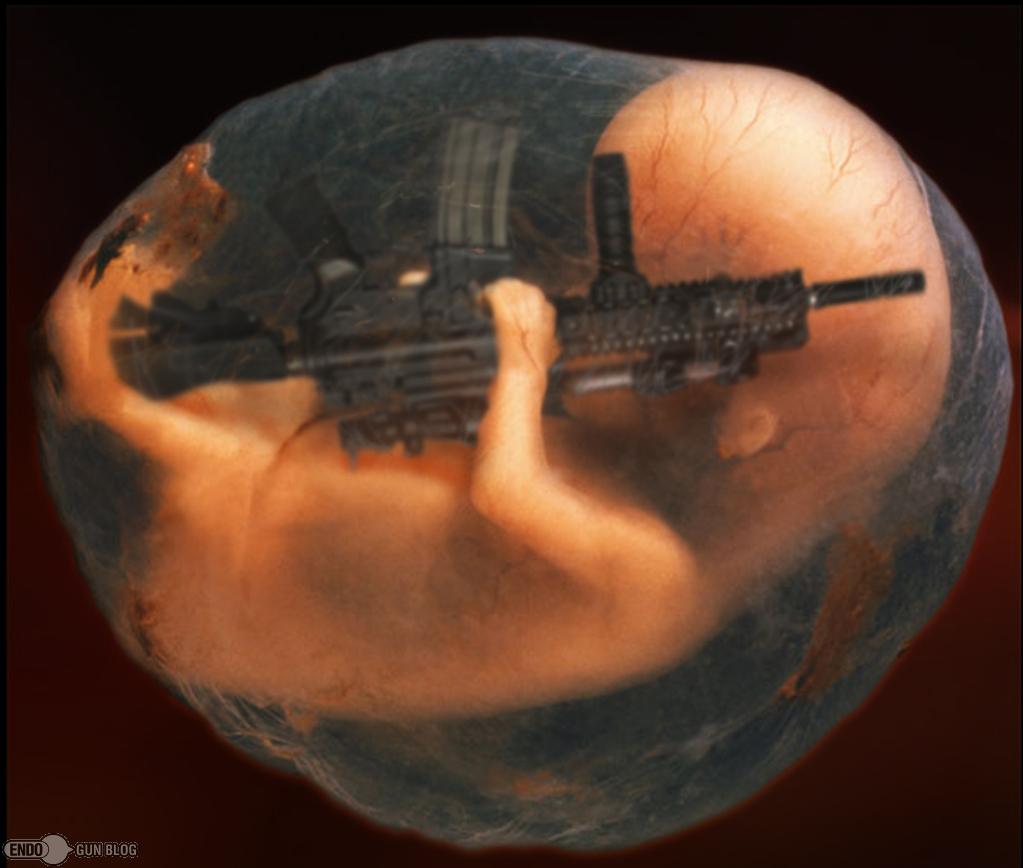 posted on Apr, 28 2014 @ 10:37 AM
link
Oh South Carolina how wonderfully strange and backwards you can be. I used to love that state as a teenager 15 to 16 because I could get my friends that were 18 to drive from NC where we were over the border to buy beer and fireworks for us on the weekends. I am sure the drinking age has finally caught up to 21 at this point but back then it was 18.

Well of course this is simply an attempt to declare fetuses as humans with rights or at least just one step in the chain of planned events to do so.

It is an unneeded bill because a woman can already legally protect herself from great bodily harm by any means necessary.

But seriously, sounds like a redundant law..... Written by an idiot in the middle of a month long drinking binge.