Did anyone actually listen to that 9 minute debacle of a conversation?

TMZ really cherry picked which parts of that conversation they wanted printed. After listening to the entire conversation,with those little quoted parts in their entire context, I don't hear a blanket racist statement. What I heard was an insecure, jealous old man whose much younger "trophy" girlfriend was taking pictures with a man known for his sexual conquests with thousands of women and posting those pictures on instagram. The black people he was referring to was really just one person, Magic Johnson.

Of course that's nowhere near as sensational as "ermagerd that old racist white guy (who has a black/mexican girlfriend) does't want black people spending lots of money on a team he owns oh noes".

And then there's this:

President Barack Obama on Sunday described comments reportedly made by the owner of the Los Angeles Clippers "incredibly offensive racist statements," before casting them as part of a continuing legacy of slavery and segregation that Americans must vigilantly fight.

"When ignorant folks want to advertise their ignorance, you don't really have to do anything, you just let them talk," Obama said when asked to respond to Donald Sterling's reported comments.

Has a deep seated prejudiced and racist mind set and is not afraid to express it.

To me this indicates some that say "I'm not racist" are either lying and want to "appear" tolerant; but deep in their soul is a dark secret they want to hide.

Has this obsessive hatred of Obama somehow generated a cultural meme that transfers over into ordinary personal interaction? Apparently so....

I may be drawing broad generalizations but culture, can and is affected by seemingly trivial and inconsequential occurrences.
edit on 27-4-2014 by olaru12 because: (no reason given)

Well, if he was an honest fellow he'd come out in a press conference and say just that. Magic sure is taking this on the road and using it, so the old guy might as well get a few comments in before the pasture gates open and he's sent out to graze.

Let's just involve race in everything so the president will actually address it.

Priorities out of line? Check

If Obama had a kid, he would be Magic Johnson. The good Magic, not the one who got AIDS. 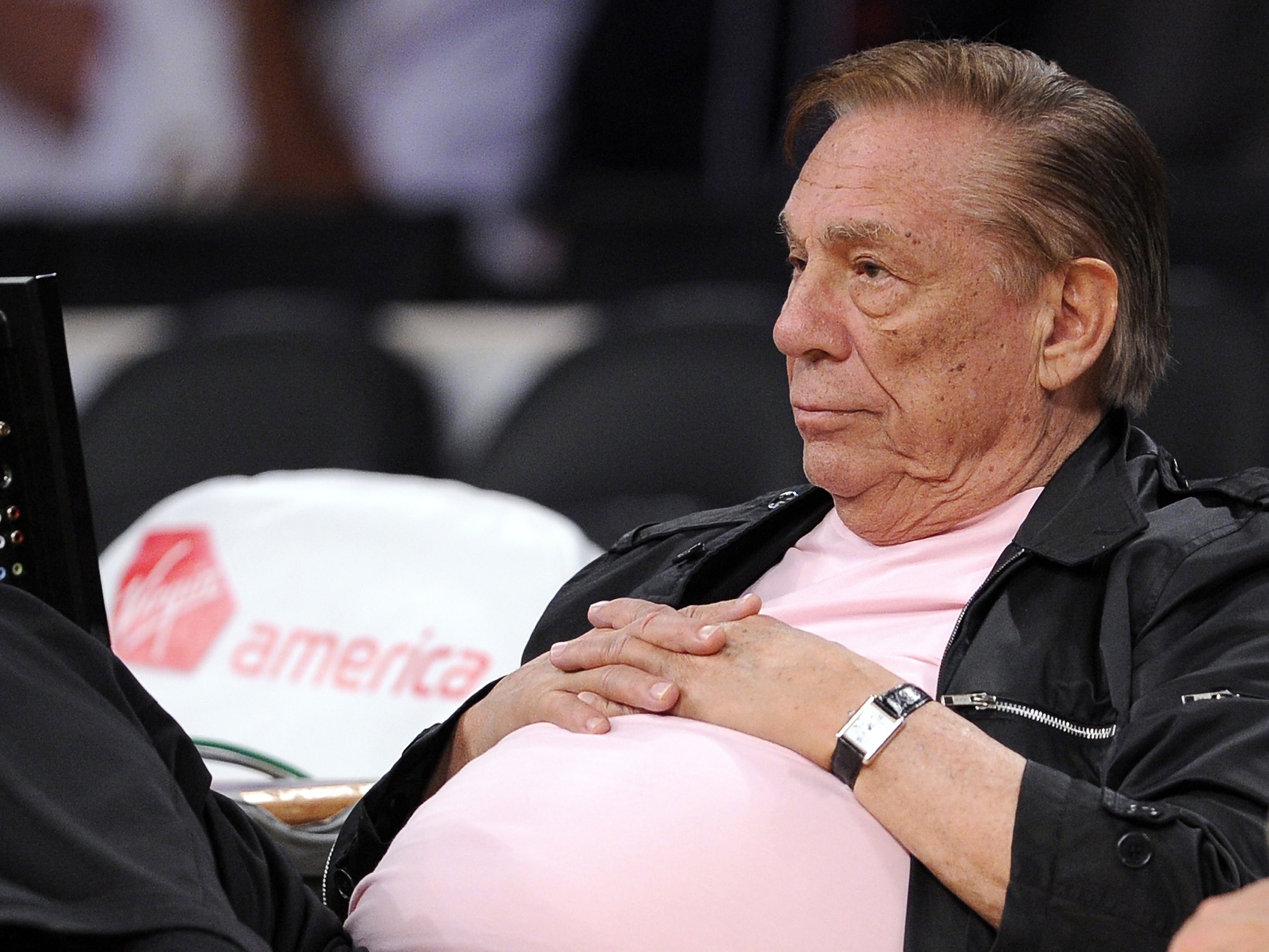 Want to know the problem with political correctness?

You can't tell who the assholes are anymore. If everyone speaks the same, then you can't identify the jerks.

(apologies for the swear)

Want to know the problem with political correctness?

You can't tell who the assholes are anymore. If everyone speaks the same, then you can't identify the jerks.

(apologies for the swear)

All anti racism folks will probably loose their gear in revolt over your statement beezzer.

You make the cut and are all right.

Everybody is prejudice, racist, or at the very least, bigoted... Unless you are a Shaolin Monk training to escape hatred... You are as hateful as the rest of the populace...

Nobody gets, that when they hate, it is usually a hate that is internalized and fed out if unchecked. The other exception is, you drink too much and don't stop talking to the wrong people. Multiply by using your job to settle grudges...


Sterling and the Clippers organization tell TMZ Sports, "We have heard the tape on TMZ Sports. We do not know if it is legitimate or if it has been altered."

The statement goes on ... "We do know that the woman on the tape -- who we believe released it to TMZ Sports -- is the defendant in a lawsuit brought by the Sterling family, alleging that she embezzled more than $1.8 million, who told Mr. Sterling that she would 'get even.'"

And the statement goes on, "Mr. Sterling is emphatic that what is reflected on that recording is not consistent with, nor does it reflect his views, beliefs or feelings. It is the antithesis of who he is, what he believes and how he has lived his life."

The woman who did the audio tape is presently being sued by the Sterling family for stealing almost 2 million dollars from them. She said she'd 'get even'. Mr. Sterling said that what is on the tape is the exact opposite of his beliefs and how he lives his life ... and they think the tape has been forged. (spliced?)

Looks like there is more to this story then we have been told.

Haha. A chintzy girl trying to pull a shakedown via TMZ. Perfect credibility is maintained.

originally posted by: TiedDestructor
First Trayvon now this.
Let's just involve race in everything so the president will actually address it.


And don't forget the Boston college prof vs the Boston cop.
Obama immediately sided with the prof and dis'd the cop.
It lead to that stupid 'beer summit' at the White House.

Now that the Clippers owner has made his statement, that the woman who made the tape is being sued by him for stealing almost 2 million $$ and so she has motive to go after him with a fake tape ... I wonder if Obama, once again, will be eating his words about racism.

He jumps in on these 'race things' ... and he keeps getting it wrong.

I guess we'll see if he got it wrong on this one as well.

posted on Apr, 27 2014 @ 11:27 AM
link
So IF it turns out that the woman faked the tape to get even for the owner taking her to court over her 2 million $$ embezzlement ... does that mean that Jessie Jackson and Al Sharpton and Magic Johnson and Barack Obama and the rest will apologize for their statements? And does it mean the man can sue the woman for even more money because, not only did she embezzle 2 million $$, but she probably just cost him millions in revenue as well as all that stress she loaded on his 80 year old body over this??

posted on Apr, 27 2014 @ 11:40 AM
link
Jay Z, who owned the Nets (or still does?) openly wore racist bling.
And yet no one called for him to be stripped of his club or boycotted.
And Obama didn't come out and make anti-racist statements about Jay Z's behavior.

How the heck do that shriveled old man get that Girlfriend????? Hmmmm.

His comments are not acceptable, but he is hardly the only person to harbor such beliefs. To think otherwise is foolish.

I don't think much can be done to him other than a public media flogging. Sad as it is, it's not against the law to be a racist prick as long as it doesn't hinder someone, ie, you denied renting to them or hiring them for a job, which he has been tried for in the past, btw. This case isn't like that. He is still a prick though, albeit a very rich one. I doubt he will have a hard time finding a new hot girlfriend.

If you want to solve this, pay him about 305 Million for the Clippers. He bought them for 13 Million so I wouldn't feel too bad for him. Otherwise you either have to consider the source and ignore him, boycott the Clippers or just move on to the next TMZ headline.

originally posted by: Hellas
Seriously there are far more important things than this. So he doesn't want black people at his games, who cares?

Star for your effort

the irony of not liking blacks yet being involved in the NBA?

I agree with you, i just find it weird. like owning a hockey team and not liking white people would be

She is a loaded chicken wing with no money back guarantee. Tila Tequila part 2. Women can be just as shameless as men can. Don't blame the billionaire this time. As odd as that sounds.

"Mr. Sterling is emphatic that what is reflected on that recording is not consistent with, nor does it reflect his views, beliefs or feelings. It is the antithesis of who he is, what he believes and how he has lived his life."

He was dating a black/mexican girl. Kind of a context clue if there ever was one.
Also note- truly racist people don't use the term "black people" in their private conversations especially when they're heated about something a black person did. It's pretty telling that they had no instances of him dropping an n-bomb or any one of the more hurtful racial slang terms.
Based on the response from our POTUS and other race baiters you'd think the guy was parading around LA with a sandwich board around his neck like Bruce Willis in Die Hard with a Vengenance.

posted on Apr, 27 2014 @ 12:12 PM
link
The poster that said he is just being jealous hit it on the head IMO, jealous and raciest.
It shouldn't matter what he said in what he thought was a private conversation, he is an old and privileged man of course he is raciest. Our founding fathers were, but that gets over looked all the time.

At the end of the day he looks like the stupid one, but he shouldn't loose his team or anything. I don't think he should even be punished by the NBA for it.


Oh olberman has his own show now FF

posted on Apr, 27 2014 @ 12:34 PM
link
This is pretty simple. I don't know what's up with the all the blabbering about the government and the President.

There are a few distinct issues:

1. Was the recording lawful under the laws of California? Is the release of this recording part of black mail scheme or if the recording is unlawful, was releasing it defamation? There could be civil and criminal recourse for the owner.
2. People who believe that the comments of the Clipper's owner are indicative of bigotry have the option to boycott Cipper's games and in my opinion should.
3. Would employees of the Clipper's organization, including the players, be in violation of their contracts by striking? I don't know the answer, but I'm sure they have lawyers who do.
edit on 2014-4-27 by theantediluvian because: (no reason given)