The Obama cult- step away from the Kool-Aid!


A cult is a religious or other social group with deviant and novel beliefs and practices.[1] However, whether any particular group's beliefs and practices are sufficiently deviant or novel enough is often unclear, and thus establishing a precise definition based on these criteria is problematic.[2][3] The English word often carries derogatory connotations[4][5] and is used selectively by proponents of "mind control" theory.[6]

There has been an air of an Obama cult ever since the day he won the Senate seat in Illinois... his election in Illinois was made into national headlines, and he was already being labeled as the next progressive wunderkind... it was mind-control and brainwashing of the masses from day one with this guy...

Obama's most rabid supporters are the news media and the motion picture industry... and they have been spinning the wheels of "Hope and Change" propaganda since he announced his candidacy for POTUS. The media didn't cover his campaign... they sold it...

Obama has championed a deviant government which fails to uphold laws (immigration, Fast and Furious), changes laws on the fly (Obamacare); the head of this injustice league is Eric Holder... (certainly a "high priest" in this cult)... a man that is still in contempt of Congress...

Harry Reid is another lofty member of this cult... and we have seen more than enough deviancy and novel beliefs from this government tool... and let's not forget Nancy Pelosi... "we'll pass this bill, then you can read it" (can you say Oligarchy? a system not too far removed from a Monarchy or Theocracy )

A cult's success falls upon it's followers, and Obama supporters are his faithful flock. We have quite a few of these cult members here on ATS, and I guarantee they will do their best to keep Obama on his pedestal. This is another true sign of "culthood"; no matter how miserably his policies have failed, his followers will continue to sing his praises and promote his vision...

(Incidentally, for those who haven't seen it, look for the South Park clip where Butters prays to the government... this is exactly what they want... to be deified by the masses)

I honestly believed that, we could never do any worse than Bush II... Barack I has been a monarch and tyrant that put Bush I, Clinton I and Bush II to shame... ( I will give props to Clinton I in regards to the Bundy ranch fiasco... Bill Clinton and Janet Reno would have invaded and firebombed the place before the protestors arrived ala. Waco...)

There comes a point when supporting an individual morphs into following... and his followers are legion.

A Cult usually kind of keeps to themselves.

These people are in your face.

I have often wondered...

How different the conversation would be if we were in the same room.

Sorry, had to do that before the progressives got on here and started braying towards Mecca Washington DC.

PBS just had a special on not too long ago about Deprogrammers!

Remember the days of the Cults and the TV shows where wealthy parents paid "Deprogrammers" to kidnap their kids?

Anyhow, being that you were talking about Cults, it brought back some memories of the 70's!

At this point, I think we have enough people whom need Deprogrammed from BOTH parties!

Don't talk about my savior that way!

A short visual history of the creepy Obama cult 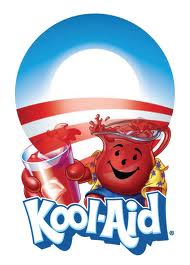 posted on Apr, 26 2014 @ 01:23 PM
link
Telling the most heavily drugged segment of a population to stay away from the Kool-Aid is kinda futile don't you think?

originally posted by: ausername
Telling the most heavily drugged segment of a population to stay away from the Kool-Aid is kinda futile don't you think?

Besides... how can anyone compete with a government that gives away free cell phones to buy votes?


The anti-Obama cult is based on an irrational, grossly excessive fear and hatred of something the cult members call “big government” or “socialism,” and an equally irrational worship of something they call “freedom” or “liberty.” The fear and hatred of big government is irrational and excessive because Obama’s innocuous heathcare bill, the passage of which cult members like Bachmann see as the beginning of the end for America, is far less momentous as a piece of “social engineering” than Social Security, Medicare, welfare or progressive taxation.

As for Obama himself, he is a bland left-leaning centrist, a slightly more liberal clone of moderate Republicans like Dwight D. Eisenhower, and his “socialist” policies are part of a long American tradition that goes back to FDR.

Besides... how can anyone compete with a government that gives away free cell phones to buy votes?


Those crappy little cellphones are just a blip compared to the unlimited child tax credits.

Keep on preaching and praising... so, when is the coronation ceremony?

Will it be televised, or will it be a small, private affair?

originally posted by: madmac5150
a reply to: Gryphon66

Keep on preaching and praising... so, when is the coronation ceremony?

Will it be televised, or will it be a small, private affair?


LOL, so, anyone who disagrees with your position is delusional? And wants to make Obama king?

First, I quoted an article, for a contrasting view with your initial post. I didn't state that was the one and only "Truth" nor did I imply that I whole-heartedly believed in the contention of the article.

But, in (anti-Obama) cult like fashion, you rushed to defend the articles of your own faith, right? Did the tenets of your belief get challenged?

Did you have anything to contest, FACTUALLY in what the fellow claimed?

No, you don't. You merely fell in line with an utterly predictable "J'ACCUSE!!! You TOO ARE A KOOL-AID DRINKER!"

It isn't faith in anything at all... it is absolute disgust with this out of control government. Faith doesn't make one puke and swallow their own vomit...

posted on Apr, 26 2014 @ 04:32 PM
link
Im not sure whats worse, people raging to the mouth about anything obama, or right wing nuts pretending they didint vote bush lol.

originally posted by: dukeofjive696969
Im not sure whats worse, people raging to the mouth about anything obama, or right wing nuts pretending they didint vote bush lol.

I never voted for Bush... I couldn't see supporting the lesser of two evils.

John McCain was a carbon copy of Bush II... again, the lesser of two evils.

It will never change. The blame the other party syndrome.

Btw I choose neither party.

They are both freedom wrecking balls.

I wonder who these people will blame for their impotence when O is gone...


“Hatred is the coward's revenge for being intimidated.”
― George Bernard Shaw

Progressives r the hardest to wake up. A lot of conservatives will admit bush is a fraud. But progressive will go down w the sinking ship.

I guess the cult has gone underground...