Anonymous Members Being Kidnapped By Men in Dark Suits.

posted on Apr, 21 2014 @ 08:21 AM
link
If this is true then it more likely a government agency than the
Illuminati (if they even exists) so maybe someone just trying to
frighten Anons members and using the Illuminati as a cover ?

Below the full transcript of the video for those who cant watch.


Multiple Anons have reported being kidnapped by mysterious men in suits after speaking out against the Illuminati. The original Illuminati were a secret organization founded by Adam Weishaupt on May 1st, 1776 in Bavaria Germany. Adam Weishaupt had an idea of using reeducation to unite humanity under a new world order, free of both government and religion. The Illuminati infiltrated both the Governments and other secret organizations of the time. The Illuminati was disbanded in 1785 after the society was banned by the Bavarian Government.

At least a few of these Anons are well trusted, their claims and eye witness accounts of their separate encounters match up. This has led us to believe the same organization is responsible for each of the kidnappings. It's unclear who's exactly responsible for the kidnappings... Whoever these people are, they have a lot of connections and a lot of power.

It's important to note that all the Anons kidnapped spoke out against the Illuminati directly prior to being kidnapped. The Anons kidnapped reported being drugged and interrogated. They were threatened into taking down their videos & removing their comments directed at the Illuminati. It's possible a government is responsible for the kidnappings and is using the Illuminati as a diversion, however its also possible an organization going by the name "Illuminati" is responsible for the kidnappings.

It can't be ignored that these kidnappings did take place. All we know at this point is the kidnappers wear black suits, drive unmarked vehicles, and appear to be targeting Anons who speak out against the Illuminati. Be assured, the crimes committed by these people will not be forgotten... Justice will come for them.


If the kidnappings did take place as claimed then someone really
has had enough of Anonymous and really want them out of the
picture whoever they are.

How do we know if it was really them that were kidnapped?

posted on Apr, 21 2014 @ 08:34 AM
link
If and I do mean big if these accounts are true I don't think that the people Anonymous are attacking are responsible. If they were so worried about them they wouldn't waste their time kidnapping them they would just off whoever they thought was a threat. Pretty easy to pin a suicide on a computer geek. I feel Anonymous is just a big bunch of nerds who find security loopholes and exploits them for fame 15 minutes at a time but don't really do anything. If Anonymous was serious we would hear about them more than we do. I would go as far as to say Anon is making this stuff up to draw attention to them so that if anything happens people might find it suspicious. Kinda like a public witness protection. Plus if these accounts are true and they don't do anything then Anonymous is a useless group.

The biggest threat of a hacker is another hacker. And being anonymous seriously discredits everything that comes out of their mouths.
edit on 21-4-2014 by marbles87 because: (no reason given)

posted on Apr, 21 2014 @ 08:44 AM
link
Sounds more like a tactic by some members of anon to draw attention. I for one don't believe it. Agreeing with a previous post that if it truly was members of illuminatti,these people would have simply had unfortunate accidents and with all the power and connections they have,if they wanted videos taken down,they would be down. They wouldn't have to kidnap you and ask. Makes me laugh,actually.

originally posted by: marbles87
I feel Anonymous is just a big bunch of nerds who find security loopholes and exploits them for fame 15 minutes at a time but don't really do anything.

I think that pretty much sums it up nicely.
And the 'kidnapping' thing .... a cry for attention ... nothing more.

I've never taken anything coming out of the Anonymous Movement too seriously and now that they claim that they're being kidnapped by the Illuminati...well...even less so.

posted on Apr, 21 2014 @ 09:25 AM
link
Well, the illuminati is an old name. A similar society does exist today under a different name and they do control much of the worlds influence. Now these are probably government agents, maybe the government organization is trying to steer attention to the illuminati which isn't even real. Many in control of governments belong to this organization, locked in the way they think by a consciousness created by this class of people. Another words, if you accept the conditioning and promote it, you succeed in politics and law enforcement at upper levels.

So what is this organization, it is a conglomerate of certain families that have been running things for a long time. Most people do not know that we really do not have free will, we only have freedom along a path that has been chosen for us by a select group. If we go against their desires, they crush us. Most of society here in America is deeply influenced by this group. We just don't know it. If you wave a carrot in front of a rabbit, you can make him follow it, except for Beezzer, he is different, that requires a cookie. After all he is an ATSer.

And they do not forgive nor are they likely to forget.

posted on Apr, 21 2014 @ 10:31 AM
link
I will say the background sound in the video has some kind of subliminal stimuli for activation of a specific action. careful.
en.wikipedia.org...

Sounds like the guberments reverse psychology strategy. Scare everyone with more BS. Anyone can make an Anonymous video. 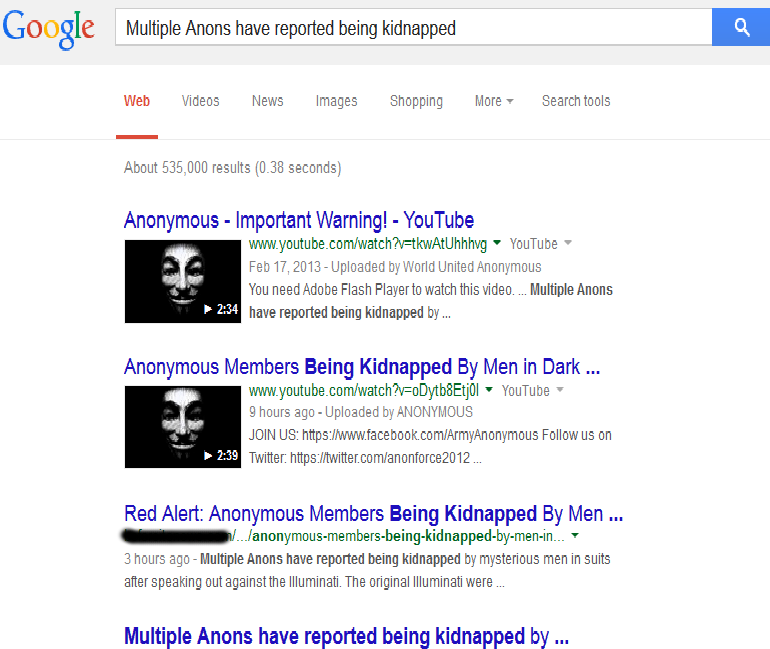 As we can clearly see, this is not exactly a new story, but for some reason it picked back up today.
The story itself seems to be at least a year old, if not older, but I didnt really look any further back.

posted on Apr, 21 2014 @ 10:48 AM
link
Sounds like The illuminati are the Templars while the Anonymous Group are the Assassins...

originally posted by: GreatProphet
Sounds like The illuminati are the Templars while the Anonymous Group are the Assassins...

In that game series the Assassins supported math worshipers and killed a pretty wise group (of course the game had shown them as evil killers), but besides from that there's a lot of stuff opening your eyes, if you can already see it and know it, so you know it's mostly real.

Those who are in power today are the inheritors of those who created the money system, religions, did the first slavery and caused the first today known wars, 9000 years ago, not only an eventual organization from a wiki page. They own most large companies by investing. Some of the (claimed) 7.2 billion people always will beg them for money for doing dark deeds. Or think they would help "society" by letting them see information or helping their system.
edit on 21-4-2014 by oneoneone because: (no reason given)

It would seem that the supposed Illuminati have the upper hand in that they know who the Anonymous members are and can collect them at will. That implies a much higher order of intelligence capabilities than some of the penny ante stuff the Anonymous have done over the years. From my sole outlook on the situation here from my ATS seat, I don't seen that Anonymous is much of a threat to anyone, let along the Illuminati.

Unless we can be given more information, I'm afraid that this latest communiqué from the A team can only be viewed as them creating a straw man adversary for themselves. This video calls their whole outfit into question as being juvenile. They have never escaped that original impression from many of us out here in conspiracy land and never will at the current rate of mysterious videos with no substance.

# anonymous! they are sick SICK individuals! I have 0 respect for them.

I hope the Illuminati is real and continues to kidnap the anons!

Interesting... Got any proof?


originally posted by: snypwsd
Interesting... Got any proof?

Perhaps this personal experience from within will give the hints for a neutral view:

Anonymous got a lot of shard groups - only a small one is a hacker part.
I didn't pay attention for a while now, but back then that part was given a tool to flood websites and seemed to be infiltrated, so that the target websites became non positive to attack for the many - some unwise, keeping the target website as topic dominantly.
But the name "anonymous" is also to be anyone, not just a group. Many create a video or take over a website under the label Anonymous without cooperating with this shard.

There was a legal anti system shard, too, which was successfully unpopulated by FBI disinformation strategies, by attacking the website and exposing the admins info / making him lose his job by calling there and so on. Actually the other shards fought this shard with no back fight from this shard.

The largest Anonymous part was that anti Scientology movement, sadly. Got a lot of it's members from the media from many years ago. An easily influenceable mass without self awareness.
A Scientology presentation pretty much looked like it'd be people turning religion into independent thinking, nothing about this media image of them believing in science fiction. They appeared on an against censorship political party show.

The media creates the image of Anonymous completely being an illegal hacker group fighting for justice.
edit on 21-4-2014 by oneoneone because: (no reason given)