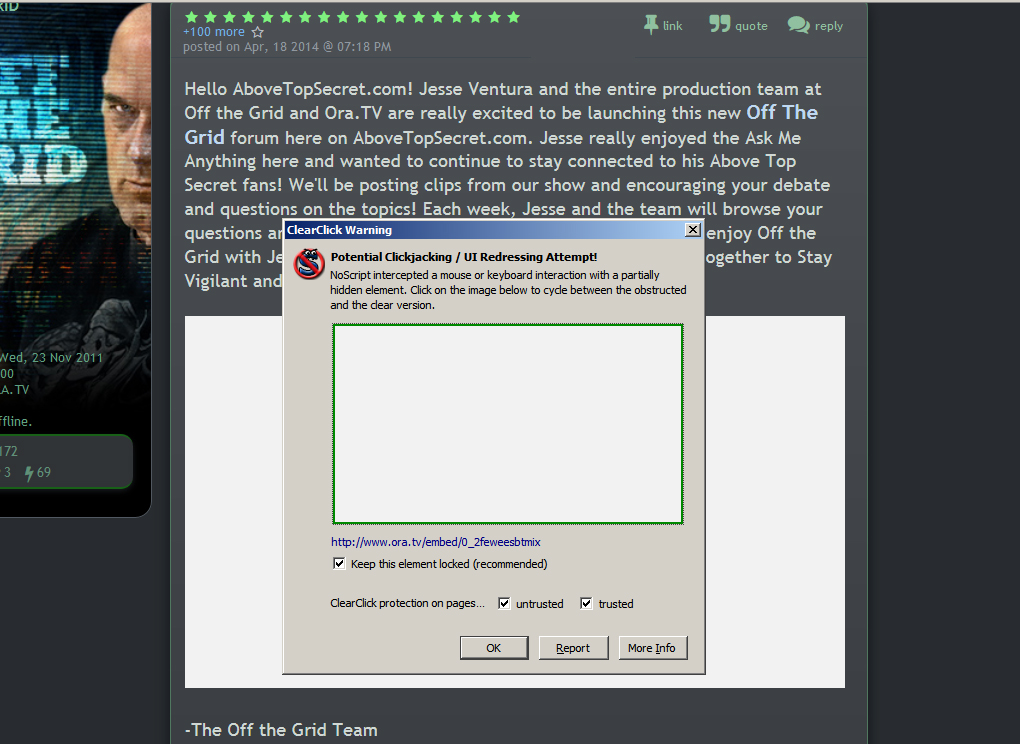 Anything from the picture upload button, to pressing play on an embedded video has been triggering it. It never used to happen before, does it have something to do with the recent changes?
edit on Sun, 20 Apr 2014 18:44:22 -0500 by TKDRL because: (no reason given)
edit on 21-4-2014 by SkepticOverlord because: adde "false alarm" to thread title

You might want to check your computer. I have been on here all weekend and haven't had any problems.

You use noscript as well?

Along with other warning programs, and haven't had any problems with any of them.

I have also had a lot of page redirects triggered by ATS clicks in the last couple of days. They took me to a site called updatlate.com which launched a pop-up telling me my Java was out of date and I should "click OK to update". Er yeah, not falling for that one.

It only seemed to launch from ATS, not any other sites I've visited.

Hmmm, guess I might as well run a deep full scan with mbam then.

Good luck getting anything changed.
All the Big Wheels told me its normal. Noting is wrong.


I can tell you from my own experience...let it go.

posted on Apr, 21 2014 @ 05:37 AM
link
I have the same issue sometimes with Noscript and youtube videos embedded on other sites. Particularly here on ATS.

posted on Apr, 21 2014 @ 09:48 AM
link
if that happens when you click that upload button it is probably because the upload button is a flash object, the click on it triggering the opening of a window to select a file on your computer.

another proof that ats are total amateurs when it comes to web development (html5 allows now for fancy upload and there aren't anymore reasons to use flash anywhere - an "upgrade your browser" alert is the sane thing to do for those not supporting html5.

posted on Apr, 21 2014 @ 10:03 AM
link
I use noscript and haven't had any similar issues, or any issues?
Are you using anything else in conjunction with it?

originally posted by: TKDRL
The past few days, I have been getting an alarming amount of these warnings from noscript on ATS.

It's plain and simple a false alarm. NoScript has recently been entering the realm of alarmist over-reactionary alerts as some kind of means to convince less-informed users that it's constantly doing something.

That alarm was received for the Jesse Ventura embedded video from Ora.TV. It uses the exact same technology as embeds from YouTube (actually, quite a bit less in terms of user-tracking), but NoScript has hard-coded exceptions for YouTube. So the alert is pointless and needlessly intrusive.

I'm online a great deal more than most people, and visit a wide range of sites every day. I've never used anything in the form of script blockers, cookie blockers, and have never deleted any cookies except for testing code or forcing a reset for testing. I've never had any issues.