"As a part of its attempt to control the geese population on and around the subject property, defendant Hillcrest Property Management, Inc. kept a pair of mute swans on or near the retention pond," the widow claims in the lawsuit.

"The mute swan is one of the heaviest flying birds, with males (known as cobs) averaging about twenty-four to twenty-six pounds.

"Mute swans are extremely aggressive and attack by smashing at their victims with bony spurs in the wings, accompanied by biting with their large bill. The wings of these swans are very powerful, reported to exert enough force to break an adult man's leg," according to the complaint.

I think there would be a joke in there somewhere, if this hadn't ended tragically with someone being killed. As it is though, it sounds like they added the very thing which caused the man to drown and it wouldn't have otherwise been there. I've never heard of a Mute Swan in terms of a critter to watch out for, but apparently they do get aggressive at times. What a set of circumstances for how this all happened.

This is the craziest story I have seen all day, maybe week.

I would like more info though. It must have been one hell of an attack. 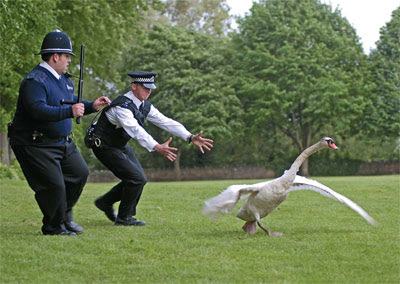 From the source article ...

In April 2012, Hensley was kayaking on the Bay Colony pond in Des Plaines when he "was attacked by the mute swans kept by defendant on the premises."
"This attack caused or contributed to the cause of Anthony Hensley falling out of his kayak and ultimately drowning," his wife says.

Well that is one way to take a swan dive out of this existence!

It certainly didn't go swimmingly for him!

How awful....as bizarre as it sounds, it does seem funny at first glance until you find out that a man got killed because of them

The widow does seem like she may have a strong case against the property management due to the fact they were responsible for taking care of swans, kinda like in a dog attack case

And he left behind 2 kids too.....damn
Hope she wins

posted on Apr, 20 2014 @ 02:02 AM
link
Given the time of year, April, it's likely the Mute Swans were protecting territory and a nest / eggs, so the aggression levels will have been elevated.
I sit watching the waterfowl at the local reservoirs and the Swans have been chasing everything away from their nest sites recently. Other times of the year, without nests to protect, they are not too bad.

This is exactly what I was thinking.

Swans are usually associated with calm and serenity but large water fowl are not to be underestimated and can make fierce property guards. My Grandparents had both geese and swans on the property. As children we were told to always stay away from them. My Grandfather, who was not a small man, got too close to a nesting pair and with one flick of a wing had his wrist bone snapped in two.

Poor man it must have been terrifying.

posted on Apr, 20 2014 @ 03:06 AM
link
That's what Life-Jackets are for !
It is the LAW to have one when boating, at least here in Canada.
The lawsuit is idiotic, at least this one
makes more sense :
Egyptians to sue Israel over the Biblical Ten Plagues
www.yourjewishnews.com...

posted on Apr, 20 2014 @ 03:16 AM
link
I remember reading a story one time about geese being used to back up human and canine patrols at nuclear weapons storage facilities in Europe. I wonder if they were the same type of geese? Animals. They never cease to amaze me. But I'm not surprise. The amount of time geese can stay airborne and the distances they can travel are pretty astonishing. But getting taken out by a 24 pound bird? that's almost a spooky as the Jesse Ventura pic! or that thing that lives in your closet!

posted on Apr, 20 2014 @ 05:13 AM
link
After looking for the original news of the accident, it looks like the victim wasn't just kayaking near the swans, his job was to take care of the swans and he apparently drowned because of the heavy clothes and boots he was wearing at the time.

Edited to add one source.

originally posted by: tencap77
I remember reading a story one time about geese being used to back up human and canine patrols at nuclear weapons storage facilities in Europe. I wonder if they were the same type of geese?


In this case the swans were used to keep the geese away from the area.

And yes, in Europe is not that uncommon to use geese as sentries, as they are always aware of what is happening around them to sound a very audible alarm if it's necessary.

While this is a tragedy, trying to paint a swan as some sort of bringer of death is silly. Could this be a way to get compensation?

At certain times of year swans are territorial and should be treated with respect. Just like walking in a field with cows and calves. If people cannot read the signs then that's the tragedy, not that a swan tried to chase them away.

originally posted by: tencap77
I remember reading a story one time about geese being used to back up human and canine patrols at nuclear weapons storage facilities in Europe...

Near where I live there was a major whiskey distilling company that used geese to guard the warehouses containing the aging product. The buildings were fenced off to contain the fowl and one could see them meandering about between the structures. Not only could they pose a physical threat to invaders, but would apparently put up a major vocal fuss that would serve as an alert.

I was attacked by the little Bastards when I was 5, hated the things ever since and on my hit list.

posted on Apr, 20 2014 @ 06:58 AM
link
On a side note, this is a lesson in life vests and boat safety. Kayaks and canoes are prone to tip. If there was ever a boat that you should be wearing a life vest on it is one of these. Had he died from the actual attack, and not falling out of his kayak, I would say they were 100% liable. As it is, you should EXPECT to fall out of your kayak from time to time.

It would be interesting to know the full story, but I am guessing he is the main witness. Did he approach the swans intentionally? If so, there is some blame that needs to be shifted away. Who hasn't seen a youtube vid of someone getting harassed by a goose or swan? I am not saying there is no liability on the estate's part, just that drowning from tipping your kayak does not equal getting killed by someones guard geese.

If this is a bird that was put there to help control geese, God help us all. The goose is the biggest jerk the animal kingdom has ever known, and is fearlessly aggressive. There are several geese at a local lake where some genius placed their forebears decades ago. Presumably for aesthetic reasons.

Those hell birds....i have had to physically fight them on more than one (dozen) occasion(s). They don't fly so well when you throw them backwards, like doing a hammer throw. But don't for one second doubt that they won't be right back at you, unfazed and unintimidated.

originally posted by: Halfswede
It would be interesting to know the full story, but I am guessing he is the main witness.


No, someone else witnessed the accident.

Did he approach the swans intentionally?


Yes, his work was to take care of the swans, just read the source article I posted some posts above.

originally posted by: bigfatfurrytexan
If this is a bird that was put there to help control geese, God help us all


And they only used a pair of swans to control the geese.

Is it true that a swan's wing can break your arm?

Yes, but only in exceptional cases. If a wing in full span and velocity were to hit a weak-boned person (such as a child or an elderly person) then it is theoretically possible. In reality it is almost unheard of and is never used as a form of attack as swans are a defensive bird. The only time they become aggressive is when they are protecting their nesting ground or cygnets when they will chase off intruders, be they other swans, geese or humans who get too close.

So, I don't know the age of the man in question, but if he was older or had weaker bones, it could have happened. Additionally, anytime we are talking about getting a human being in the water with a creature who is in its element, the equation changes in terms of the power a human can put out or withstand vis a vis the critter in question.

You'd be surprised at the size of fish it would take to drag you off into the river or pond and drown you if it wanted to. It's not as big as you might think.

So, yeah, a swan is a big strong bird on land. Think about how much stronger that will seem when you are in water where you aren't really suited to be. Now, if your leg happens to get caught in an awkward angle where the swan has just the right power and leverage ... I could see it theoretically being able to cause some damage where it ordinarily wouldn't. Not that it did this intentionally, just a freak accident, but that doesn't change the outcome.