I was watching the transmission in fox sports live when I saw this shadow running at high speed.
The people does not seem to be aware of the shadow running in front of them.

The video just surfaced today in social media in my country. It's not the first time things like this happen in the stadium.
It has been rebuilt many times, since it's the oldest in my city.

Personally I find this video really weird, At first I thought it was someone just running, but the shadow seems to vanish in the crowd.
www.youtube.com... 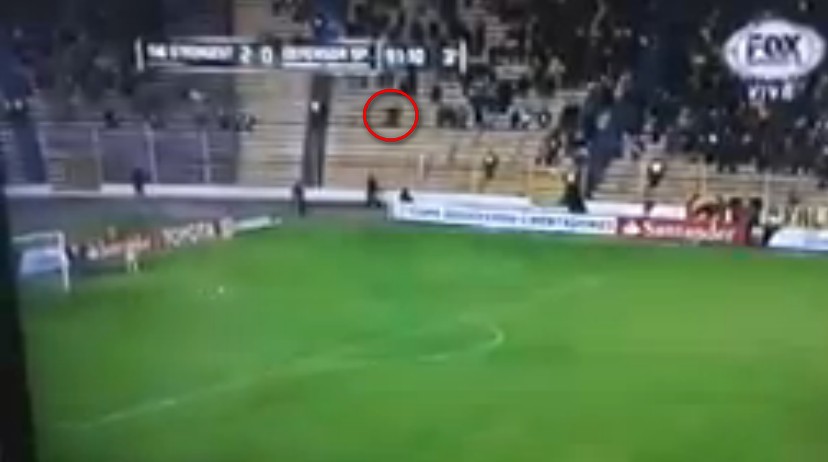 I think you have piqued my interest however the video isnt working. ill stroll back by later

Your video isn't working. Post the link directly and someone else can embed it.

Pretty interesting. I wonder if a rational explanation could have to do with some kind of reflection. I find it fascinating, nonetheless.

posted on Apr, 19 2014 @ 03:54 PM
link
a reply to: elpistolero1
at first it looks like a real person but I don't think anyone can
run at least not that fast, through people in stadium seating.
Interesting if real...

posted on Apr, 19 2014 @ 03:56 PM
link
Very interesting. At first it looks like just some dude walking really fast and zooming by. But then again, he is going curiously fast given how that is not so easy to do in those cramped seats and limited room. Also other fans he is walking by don't seem to notice him. Very odd

I thought it was the shadow of a helicopter in the sky recording the event at first. Never noticed the leg action until it was slowed down.

Hmmm, look forward to the comments on this one.

No need to apologize. At first glance it seems that it might be some sort of double exposure/reflection, and the "shadow figure" is actually one of the players on the field. I say that because it appears to run upwards further into the stands and through a bunch of people (yet nobody sitting there notices it). It also happens while the game is still in play. Interesting catch at any rate.

The fact that they don't notice it also made me wonder. Perhaps the only reason I think it's not real.

edit on 19-4-2014 by brazenalderpadrescorpio because: (no reason given)

posted on Apr, 19 2014 @ 04:01 PM
link
Um...I don't really know what to make of this one but it can be faked because I have seen that effect been done on Adobe After Effects and it does look like a man running but his arms don't move at the same speed. Either way it's interesting.

The fact that they don't notice it also made me wonder. Perhaps the only reason I think it's not real.

I dont think we can discount a production artifact either. Perhaps something on the station's side that just so happens to look like a dude running through the stadium, when it is in fact part of another video that just got overlaid.

posted on Apr, 19 2014 @ 04:06 PM
link
a reply to: youdidntseeme
Interesting point. I know next to nothing about video production. What you said makes perfect sense, though.

edit on 19-4-2014 by brazenalderpadrescorpio because: (no reason given)

posted on Apr, 19 2014 @ 04:09 PM
link
I have to say it's someone running down an aisle, the image phases a bit when the runner crosses over a bluish carpet or whatever that is over steps that run at right angles to the aisle.

posted on Apr, 19 2014 @ 04:16 PM
link
a reply to: elpistolero1
wow,cant say what that is. i do believe you might have a ghostly image there guy..... then again like brazen said maybe a reflection of some sorts? pretty cool though.

I dont have any other comment sorry, but damn thats is just freaky freaky.