posted on Apr, 18 2014 @ 07:15 PM
link
Here's some alarming news coming out about the BLM in Wyoming herding up horses and turning them over to State authorities there.

The State is then selling them off to slaughter houses in Canada.

Another 'Image" problem for sure here.

The Bureau of Land Management is clearly having an image problem. As the outrage over its intimidating show of force during last week’s showdown at the Bundy Ranch in Nevada proved, the federal agency is now caught up in a controversy originating in Wyoming.

According to recent reports, agents herded a large group of wild horses in the state before ceding control of the majestic animals to state authorities. At that point, Wyoming officials sold them off to a slaughterhouse in Canada.

Though wild horses, which have roamed throughout the American West for hundreds of years, are protected by federal law, the BLM contends these animals do not qualify for such protection.

Instead, agency spokesperson Sarah Beckwith contends they are strays descended from rodeo horses from four decades ago.

Does it matter if it's from 40 years ago or 200 years ago??
And how can they tell that they are not descendants from older horses?
Did they do horsie DNA testing or something???

Sheesh, these people need to get a grip

It's one thing to kill sickly animals, yes, but to just grab them up because they assume they are not from the older generation is grasping at straws IMO

I used to have 40 acres out here and we were surrounded by BLM land. I watched three generations of a bunch of horses that would run wild all around my property. I always heard rumors that BLM would round them up so we always kept close watch and planned to protect them if we needed to. We also never breathed a word of it to anybody beyond close friends.

They never showed up but I think it was only because they just simply didn't know. A big golf resort ended up buying it so I'm hoping the horses ended up adopted by some rich ranchers or something (we are plagued with those guys around here).

posted on Apr, 18 2014 @ 07:26 PM
link
It is weird how Canadians are viewed across the world has nice people. Yet, here is a country that will sell you uranium, asbestos, completely strip a land mass about the size of Florida to scrape oil from the earth. I think we had thay last known frontal lobotomy, There is a thread about the residential school horror. We kill tiny white seals and yes, horses too.

posted on Apr, 18 2014 @ 07:26 PM
link
A little light was shed on the BLM and it exposed how things actually went on in one situation, and now people are starting to look at the BLM and how they operate as a whole. I think much more will come to light about the BLM and their inner workings over the next few weeks and maybe months.

I'm Canadian and the wild horses and baby seals are welcome for refuge in my backyard.

Save a tortoise . . . Shoot a domestic terrorist?

They're going to need a spokes man as well.

How about Harry Reid? He could ride in from off the range on a f'ing turtle with a foo man chu mustache and a bowl of egg fried rice.

I went to your link, and shared this story on FB...with this written in...

From your second link:

"Nobody had a permit to have these horses grazing
on public lands," Beckwith said.


Area ranchers and farmers had long complained
that the herd grazed down pastures and damaged
cattle rangeland.

Wait, wait. Didn't the BLM, in the Harry Reid, ENN pdf, complain that cattle were causing irreparable harm to the land by grazing without a permit too? So, if they have a permit, they do less damage?

Something is surely going on where they need to clear the land, NOW.

Just another case of the BLM bending to the will of the ranchers;


The cattle and sheep industries want the horses gone from the rangeland...

Somehow I knew you would see that !!!

originally posted by: links234
You're right...breaking news from 2011:

Just another case of the BLM bending to the will of the ranchers;


The cattle and sheep industries want the horses gone from the rangeland...

Im thinking its a case of people greasing the right pockets.

Some pay, some don't.

posted on Apr, 18 2014 @ 07:59 PM
link
a reply to: xuenchen
And their utterly destructive activity left behind four orphaned foals. I learned this in the comments, so hopefully someone has rescued them.

Used to be, interference with wild horses was a felony, and you could only adopt once every so often.

This is distressful, because they also aren't stupid, and know it's birthing season. It's spring, for heaven's sake!

So, did they leave the orphaned foals, just like they separated and likely killed the calves from Bundy's farm?

Who ARE these animals?

They have to be against a clock. The one article says, "The BLM were used to flying below the radar". Well, not anymore, huh? Nor Harry Reid, either.

posted on Apr, 18 2014 @ 08:07 PM
link
How's that for a little Irony. Does anyone here actually know why the Government is out Killing Wild Horses??? Because they are being Lobbied to do so. Who is Lobbying for those horses to be killed??? Mostly Cattle Ranchers!! Why, because the Wild Horses, according to the Ranchers, eat up all the good grazing land before they can get their Cows there so that their cattle can graze on it. Funny how that works, isn't it.

The reason I know this is because I used to live in an area here in Cali. with a bunch of Old Timer Ranchers and Cowboys and they were constantly talking about it. There was even a young girl who I knew that hated the idea of killing wild horses to feed the cattle so she actually went to DC and started Lobbying for the Horses instead. As you might imagine she quickly became the enemy of the Ranchers and Cowboys.

Regardless of which side you take, either the Cows or the Horses, this seems to me like a smear tactic being used against the BLM. Not that I'm a fan of the BLM or anything, but you should keep in mind that no Gov. agency will ever lift a finger to do anything unless someone else is shoving money in their pockets to do so. So while the killing, or Culling as I've heard it labeled usually, is being done by the BLM, it's being done because the cattle Ranchers want the grass for their cows and don't give a crap about wild horses. Just an FYI.

posted on Apr, 18 2014 @ 08:14 PM
link
These horses are obviously domestic terrorists and should have been eliminated right away!

Pictured below is a BLM agent getting rid of nuisance cats. 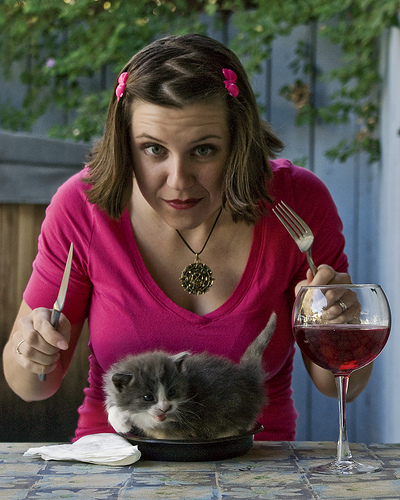 originally posted by: imwilliam
The BLM needs some PR help. Some nice little jingle. Maybe I can assist:

Save a tortoise . . . Shoot a domestic terrorist?

They're going to need a spokes man as well.

How about Harry Reid? He could ride in from off the range on a f'ing turtle with a foo man chu mustache and a bowl of egg fried rice.

Except that doesn't work. There were too many tortoises around Bundy's land, so they were euthanizing them, too. Someone should have told them that turtle soup is popular in some places.

I know historically it would have been as stupid as eating your car, but in modern times, why not.

We eat cows and sheep, but few people would eat goats and no one eats horses.

It is all very strange.

Partially true, but like everything, there is a balance to be maintained. The wild horse has always been considered a sort of odd duck by the fed. It's a Johnny-Come-Lately. It's not really a natural critter here. All wild horses descend from those that escaped from the Spanish explorers, and they've integrated into the landscape and Native American culture since.

So they're suffering legally from being neither fish nor fowl - not native wildlife, but not exactly feral anymore, either.