Now somebody wants to have the State of Illinois fund the coming Obama Presidential Library.

Politicians there are all excited of course and they say the funding really won't hurt Illinois.

In fact the Mayor of Chicago says some sites are already being eyeballed.

Of course they aren't letting on about the bidding and what not all being cronyized.

The story mentions $100 million, but I would think the start-up would be much less for obvious reasons.

What will they call the special Bond Issue this time?


On Friday, an Illinois House Committee cleared a bill that would offer $100 million for the construction of the Barack Obama Presidential Library in Chicago. Mayor Rahm Emanuel immediately labeled the proposal a brilliant one, stating, “This is the home where the president began his career in public life and also where his family calls home.” Emanuel says that building the library would create economic development in the city. There are six locations on the South Side of Chicago that have been targeted for the potential library home, and two universities also want the library.

Historically, presidential libraries have been built with private funding, then kept open through public funding. They also lose money.


Naturally Mayor E talks about "economic" development. Just what kind of "development" is the bigger question.

And besides, I wonder how many books it would take to start the Obama Library ?

Naturally Mayor E talks about "economic" development. Just what kind of "development" is the bigger question.

Yeah, how much mileage can they get from a library?

I think they should build a giant special prison complex just for Obama and all the pols who have supported his "Hope and Misery" campaign from the get go.

The reason they do this is because they have to maintain the illusion for the sheeple.

To use this seems idiotic but to those blind and sleeping it will maintain the illusion.

Oh wait....accomplishments you say?
Hmmm, he's managed to divide this country more now than it's ever been, sooooo.......that's 1 to start
He's redefined what 'transparency' means.....which means nothing to him obviously
He's the leader when it comes to lies and deceptions.......he's got that down to a tee
The foreign countries no longer respect us........thanks a lot

Some people around here think the first book should be a large print copy of the PPACA.

Then in order to add new material, a doner would have to pass a mandated test with 100 questions about the PPACA with at least 90% correct answers.

That alone should limit the expansion of the Library for at least 5 years.

They could rent a storefront in the meantime.

Naturally Mayor E talks about "economic" development. Just what kind of "development" is the bigger question.

And as a long time resident of the Chicago Area, I'd like to salute Mayor Emanuel, Michael Madigan and the entire Illinois House . . .
. . . salute you and the horse you rode in on.

The money has to come from somewhere right?

I live in southern Illinois.

This is a joke. This state is broke.

posted on Apr, 18 2014 @ 11:32 PM
link
Obama and his entire administration are a f'ing disgrace to this country. Him, Biden, Holder, etc. should be impeached. And while we're at it throw McCain, Bonehead Boehner, Reid, Boxer, Pelosi, Frankenstein to the curb as well! Hilary should be kicked on her butt as well. It's time America steps up and takes back our government. 4 year term limits FOR EVERYONE. Americans may not agree on issues like abortion, immigration, gun control whatever. But if we can't stand together as a country and demand term limits we are finished and will continue to be plundered and pillaged by the political and corporate elite. I mean if you are a left leaning whack job liberal or uptight conservative loon how can you both archetypes not agree on term limits?

Obama library? Ha lmao...............effing clown and will go down in history as one of the worst Presidents ever. I feel sorry for black people. The first black President and he was an utter failure.


The story mentions $100 million, but I would think the start-up would be much less for obvious reasons.

True, Much, Much Less after all the Thugs get their cut, I think Obama might have exactly what he's got coming! 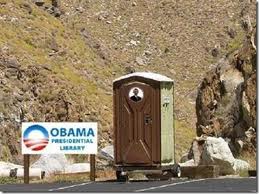 Come on in and grab the one book and re-leave yourself!!

posted on Apr, 19 2014 @ 12:15 AM
link
Could be worse, imagine the U.S. Navy building an aircraft carrier, and then doing something dumb like christening it after a POTUS.

originally posted by: seasoul
Could be worse, imagine the U.S. Navy building an aircraft carrier, and christening it the USS Barack Hussein Obama.

Well that *Might* be better than christening a destroyer "HHS Titanic"

So don't despair Illinoisan's....the checks are in the mail!

He spent a Billion dollars on a broken friggin website. A measly $100 mil on a library seems to pale in comparison.

originally posted by: hogstooth
a reply to: snarky412

He spent a Billion dollars on a broken friggin website. A measly $100 mil on a library seems to pale in comparison.