Ora.TV's Off The Grid with Jesse Ventura and AboveTopSecret.com Partner Up to Stay Vigilant

Now seriously, Jessie, I suppose you'll call it entertainment when Rob Ford beat you at arm wrestling a few months back, (more like painful entertainment I call it) Sorry, had to put this out there for BoyMonkey.

Anyway cheers and here's to this new venture.

tsk, such a cynic, what's wrong with being "branded"?

posted on Apr, 18 2014 @ 05:46 PM
link
I have to give props to the Abovetopsecret owners for even getting Jesse on here in the first place. Now this! Awesome!

This news makes up for the itty bitty screen size that happened yesterday, I'll just eagerly await the "widescreen" option without complaining too much about it...
edit on 18-4-2014 by Wookiep because: (no reason given)

I have to give props to the Abovetopsecret ownership for even getting Jesse on here in the first place. Now this! Awesome!

originally posted by: Springer
This is a good day for ATS that you, the membership played the key role in making happen. High Fives all around.

Nice work. High Six's all around too! 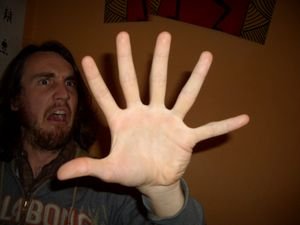 EDIT: The below was added, and after I posted it I noticed that I had four stars, so just wanted to make clear that they were starring the High Six and not this addition. Thanks.:

I called this earlier, although it wasn't too hard to figure out with all the hints... www.abovetopsecret.com...

This should be loads of fun!

posted on Apr, 18 2014 @ 06:06 PM
link
When does Alex Jones get a section? Bwahahahahah. I really dislike Jones. I like Jessie Ventura a bit more, although admittedly I am not going to be participating in his thread past this post.

posted on Apr, 18 2014 @ 06:07 PM
link
Jesse's response to who had the larger arms vs Arnold was priceless.Re-Welcome to Jesse and a new one to OFFTHEGRID

posted on Apr, 18 2014 @ 06:09 PM
link
Very nice! I like this idea a lot. I liked the show Conspiracy Theory even though it was scripted, so this should be good entertainment as well.


I have nothing else to say other than this made me smile,Congrats OTG and ATS!
A perfect mix!

originally posted by: SpaDe_
Very nice! I like this idea a lot. I liked the show Conspiracy Theory even though it was scripted, so this should be good entertainment as well.

I watched that series and saw absolutely nothing new, interesting, ground breaking or revealing on any of them. I had high hope initially but they were quickly dashed when the complete and total lack of anything new was presented.

Wish I could into it, but I can't. Good luck to all be sure to let the rest of us know if anything truly ground breaking if ever presented.

posted on Apr, 18 2014 @ 06:17 PM
link
I lurked here for a long time before I actually joined, watching ATS grow over the years has been exciting to say the least. It's come a long way from the black and neon green sort of funky website. LOL

A collaboration with Jessie is going to be a great thing for all of us!

I can't think of any shows in recent history that have presented the material the way that the show Conspiracy Theory presented it in a way that would actually make the casual skeptic take pause and think even for a second. I think for the average Joe that has little knowledge about conspiracy theories it was presented in a manner that would peak their interest and get them wondering. Of course for the average ATSer it was all day to day conversation material, but it was still good IMO.

In celebration of this well suited partnership.

I just ordered a pizza, and will wash it down with a couple of beers.

This is going to get really interesting for sure.

originally posted by: Springer
a reply to: Aleister

Thanks, but whoops, I added additional comments before I saw this. Your compliment is likely for the High Six and not for the rest. Just clearing the record on this before I go back and add pictures of my cat or something.

posted on Apr, 18 2014 @ 06:28 PM
link
As an American, actually living in America, who has put everything on the line to re-tool so that I can rejoin the workforce in a more powerful way to help my country solve its problems, I resent Jesse Ventura telling me to "stay vigilant" from Mexico.

If Jesse Ventura were "off the grid", no one would be seeing these videos.