The above is the only info released so far. Thought I would share because of where they were found - Arctic Circle. 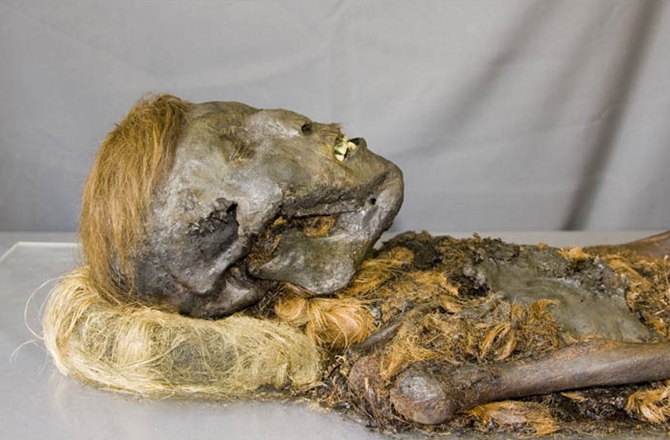 There are more pictures in the link

These people may have been of Tocharian ancestry, a light coloured Caucasoid indo European speaking group from the Northern area around the black sea that migrated into China, where the Uighars currently are.

Wasn't there a discovery some time back in China of graves that contained bodies with "western European" features?

Thanks, that's a great link. The mummies were found with Persian bowls and copper masks? It's quite a strange story. They're a bit like the Tarim mummies (Tartan mummies) found earlier, it might appear. They had red hair and pale skin, and were wearing Scottish tartan (it is thought).
Wait and I'll find a link for you

Fascinating images and a truly awful article that must have been texted in from the writer on their Easter break.

Overall, the archaeologists found 34 shallow graves with seven male adults, three male infants, and one female child, roughly 1,000 years old. Buried with a hoard of artifacts, some of the bodies had shattered or missing skulls, and smashed skeletons.

Intriguingly, the legs of the dead all point toward the nearby Gorny Poluy River.

This stood out to me. Rivers wind all over the place whereas cardinal points are an easier reference point and more typical of the observations of archaeologists. Googling 'Gorny Poluy River' yielded 2 pages of links to the same article.

Wasn't there a discovery some time back in China of graves that contained bodies with "western European" features?


Yes, I've got images of he mummies atround somewhere. tghere's paintings on some caves in China of red haired people in Indian/Persian style clothes that used to live in the area and who built a lot of the silk road cities. During Moa's era they tried to cover this up.

posted on Apr, 18 2014 @ 04:27 PM
link
Here's a link to several good photos of the Tocharian Mummies and they are very similar in appearance. (I'd embed them if I knew how, could someone post them please)?

I've been entranced with the subject of this branch of Europeans developing the trade routes and their fascinating culture for several years now. Thanks for the heads up on this new find.

originally posted by: seentoomuch
Here's a link to several good photos of the Tocharian Mummies and they are very similar in appearance. (I'd embed them if I knew how, could someone post them please)?

I've been entranced with the subject of this branch of Europeans developing the trade routes and their fascinating culture for several years now. Thanks for the heads up on this new find.


Link added to the OP.

"Beauty of Loulan", in Seentoomuch's link, looks like the Mona Lisa.
edit on 18-4-2014 by Xcathdra because: (no reason given)


Of the adults, a remarkably well-preserved man with red hair was discovered, buried in copper plating that covered him from chest to foot. Found next to his body were furs, an iron hatchet and a head buckle depicting a bear made from bronze.

That much copper he must have been important.
edit on 18-4-2014 by Char-Lee because: (no reason given)

posted on Apr, 18 2014 @ 07:48 PM
link
a reply to: Xcathdra
The link I gave should be removed from the OP as the mummies in the link I provided were found in a different area at a different time but due to their shared characteristics I believe are related. Sorry about the mix up, I had to do a few things and when I came back to the computer it was done, though I really believe they should be in the same group.

I love the new find, thanks again! 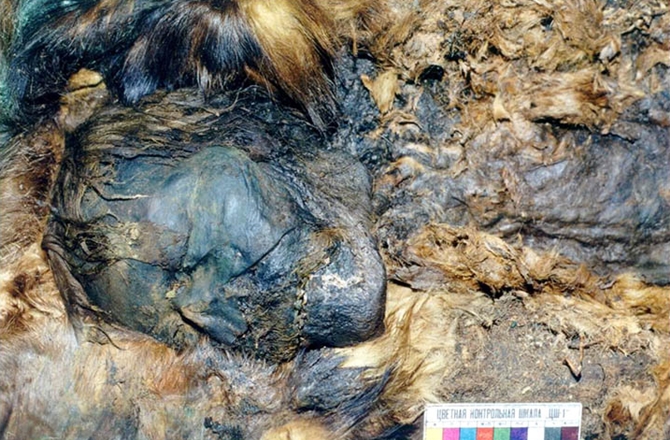 In the ATS thread above I wrote about the strange blue-skinned mummies found in Egypt - and now also in Siberia, I see.

Hiya Xcathdra, after reading those articles yesterday, I intended to search out the academic paper/s to add to the thread today. Sadly, it appears that 'lazy journalism' has conjured a story out of nowhere and it was then spammed by other media outlets without any due diligence. Believe it or not, this happens often with science journalists.

The story appeared in January 2004 in the New York Times following the dig that (apparently) took place in 2001.

Why 'apparently?' Well, it's difficult to see any paperwork on these findings.'Natalie Fedorova of Russian Academy of Sciences' doesn't appear to have published any papers on the site or contributed/co-authored any papers at all. That name of the river is associated with the original article and doesn't help to trace academic papers or book citations. Dr Bill Fitzhugh vouches for the site and was present at one time and even he seems to have no written commentary or research on the findings.

It would appear that these mummies and grave goods were removed from the site in poor circumstances:

Endless arguments took place on how to preserve the mummies that threatened to lead nowhere, Fedorova said. In the end, the researchers p acked each mummy in bandages and foil. "They began to resemble the Egyptian ones," she said. Everything was videotaped and photographed.

There could be papers in Russian. However, given the novelty of the mummies, we could expect a reference to such a paper in the English language and I can't find them.

posted on Apr, 19 2014 @ 08:00 AM
link
a reply to: seentoomuch
It's all okay, and in fact the information and images at the link you provided are very useful and informative. (By the way, please check your messages. )

To the OP: this is a fascinating subject, especially as the individuals might have been of some importance (due to the copper masks). It will be interesting to see what else they discover about them. Thank you for sharing this with us.