Get Ready for the 2014 Lyrid Meteor Shower

posted on Apr, 18 2014 @ 03:23 PM
link
April 2014 has been an exciting one for skywatchers with the blood moon/lunar eclipse and Mars in Opposition. Next up is the Lyrid Meteor Shower, April 16-April 25th. The peak of the meteor shower will be from April 22-April 23rd (during Earth Day) However, because the moon will be bright, it might be hard to see.

The Lyrids are named after the constellation Lyra, because that arrangement of stars, including Vega, marks the place in the sky where these meteors seem to originate, at least from our earthbound perspective. In fact, Lyrids have nothing to do with Vega. The true source of the shower is Comet Thatcher.

The Lyrids are one of the oldest meteor showers, they've been traced back to Chinese records dating to March 16, 687BC that described them as “Stars (that) dropped down like rain…”

Lyrid meteors are typically as bright as the stars in the Big Dipper, but some can be even brighter than Venus. Some of the Lyrids can cast shadows for a split second and leave behind debris trails that can linger for minutes.

The Lyrid meteor shower typically produces a maximum rate of 10-20 meteors per hour, although outbursts topping over a hundred per hour have been observed on occasion. The radiant, or the direction that the meteors seem to originate from, lies at right ascension 18 hours and 8 minutes and declination +32.9 degrees north. This is just about eight degrees to the southwest of the bright star Vega, which is the brightest star in the constellation of Lyra the Lyre, which also gives the Lyrids its name. 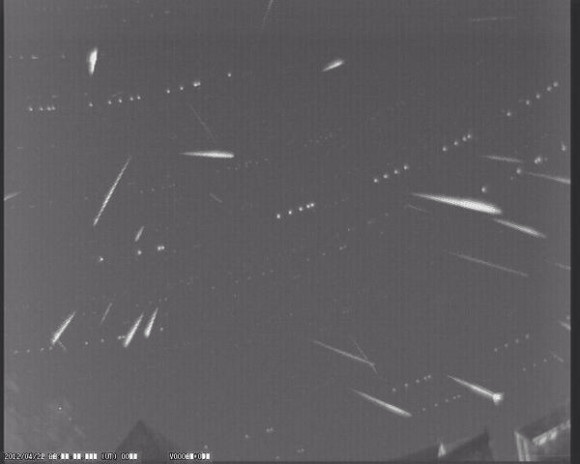 The source of the Lyrids was tracked down in the late 1860s by mathematician Johann Gottfried Galle to Comet C/1861 G1 Thatcher, the path of which came within 0.02 Astronomical Units (A.U.s) of the Earth’s orbit on April 20th, 1861, just six weeks before the comet reached perihelion. Comet G1 Thatcher is on a 415 year orbit and won’t return to the inner solar system until the late 23rd century. 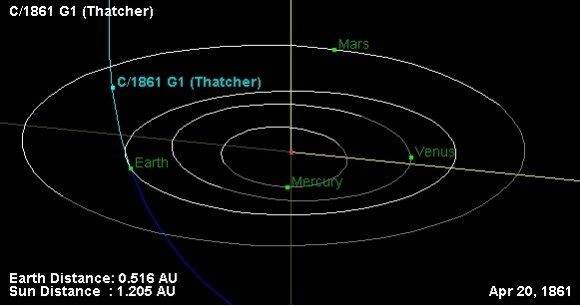 Now for the bad news. This year finds the light-polluting Moon in nearly its worst location possible for a meteor shower. Remember this week’s total lunar eclipse? Well, the Moon is now waning gibbous and will reach last quarter phase at 7:52 UT/3:52 AM EDT on April 22nd, and will thus be rising at local midnight and be high in the sky towards dawn. The Lyrid radiant rises at 9:00 PM this week for observers around 40 degrees north and rides highest at 6:00 AM local, about 45 minutes before sunrise.

The rising Lyrid radiant, looking to the northeast at 2AM local from latitude 30 degrees north. Created using Stellarium. 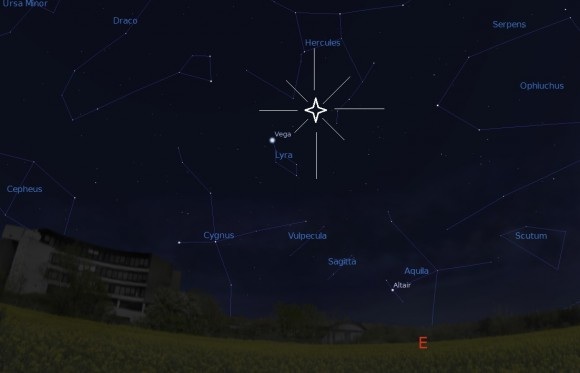 The orientation of the Earth on April 22nd at 12UT/08AM EDT. Credit: Stellarium. 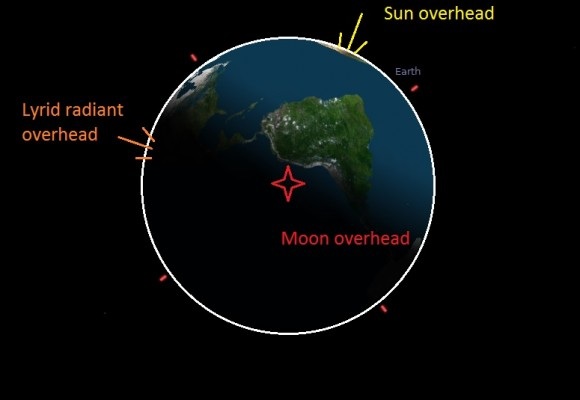 Get Ready for the Lyrid Meteor Shower

NASA: What's up for April

In case anyone is interested, here's a list of the 2014 meteor showers:
2014 Meteor Showers
edit on 18-4-2014 by Jennyfrenzy because: added additional info and sources

posted on Apr, 18 2014 @ 03:31 PM
link
Maybe I can get the shovel out and shovel the three feet of snow off the firepit and surrounding area so I can set up chairs to watch the meteor shower. We can wear our winter coveralls while sitting around the fire.. Whew, I'm tired out just thinking about it, maybe I'll just make popcorn and watch Grim tonight.

posted on Apr, 18 2014 @ 05:25 PM
link
a reply to: Jennyfrenzy
Thanks for sharing this with us. Crossing my fingers that ill be able to see a few of those shooting stars, even with the bright moon.

I love watching the sky too!!

Hope you get to see them too

I love it too, recently been studying up on constellations and names of stars. My husband got me a telescope last year and I've been putting it to good use!

You're never too young to learn
Go for it

I really like sitting around the campfire staring at the sky. A cup of coffee in hand. I bet this was a pass time of the ancient people of the world. Well, maybe not the coffee part.

posted on Apr, 18 2014 @ 10:34 PM
link
As with most every other recent sky watching event you've announced weather is being a sob for me. 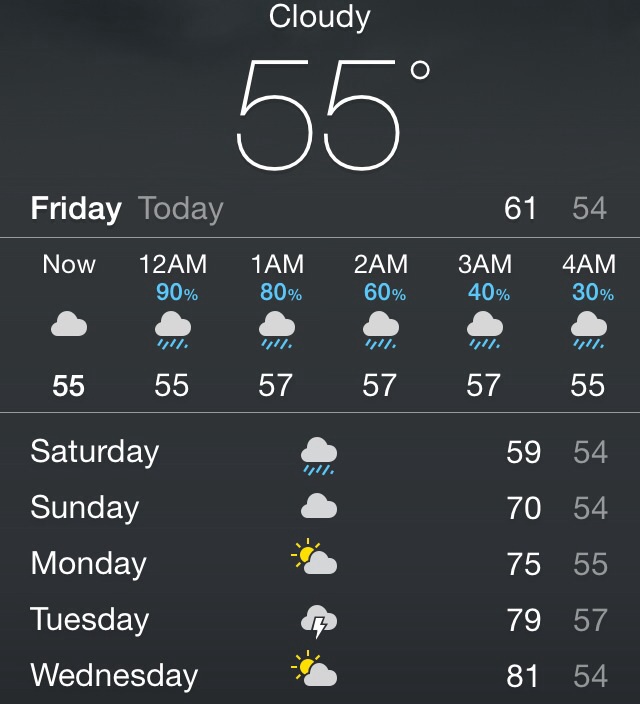 This is what you need to do to get ready, Phage

I'll get right on it.

The weather where I'm at isn't going to cooperate either Super bummed out about it.

There's always the Perseids in August!

August 10-13, 2014 before dawn, the Perseids The Perseid meteor shower is perhaps the most beloved meteor shower of the year for the Northern Hemisphere, though it’ll have to contend with a bright waning gibbous moon this year. The shower builds gradually to a peak, often produces 50 to 100 meteors per hour in a dark sky at the peak, and, for us in the Northern Hemisphere, this shower comes when the weather is warm.

The Perseids tend to strengthen in number as late night deepens into midnight, and typically produce the most meteors in the wee hours before dawn. They radiate from a point in the constellation Perseus the Hero, but, as with all meteor shower radiant points, you don’t need to know Perseus to watch the shower; instead, the meteors appear in all parts of the sky.

They are typically fast and bright meteors. They frequently leave persistent trains. Every year, you can look for the Perseids around August 10-13. They combine with the Delta Aquarid shower (above) to produce the year’s most dazzling display of shooting stars. In 2014, the Perseid meteors will streak across the short summer nights – August 10-13 – from late night until dawn, with major interference from the waning gibbous moon. Give it a try anyway, as some bright Perseids will probably be able to overcome the moon-drenched skies. Best mornings to look: August 11, 12 and 13.

And just to be silly, wouldn't it be something if a UFO decided to pass by while thousands have this live feed on their screens?

Seriously curious about the satellite though.