Why is US Senator Harry Reid so concerned with a local Nevada rancher?

Something is very wrong. Something smells rotten in the Nevada desert. And Senator Harry Reid’s fingerprints are all over it.


The government claims they haven’t paid grazing fees for 20 years. The result was a government assault on the ranch- including snipers with assault rifles, SUV’s, helicopters, airplanes and over 200 heavily armed troops. No matter whether you come down on the side of the government or the ranch family, I think all of us can agree this was excessive force. But forget all that. I believe the more important question is, why is this case so important to United States Senate Majority Leader Harry Reid? And what was his involvement in this controversial assault?


Doesn’t the Senate Majority Leader have anything more important to think about? There are almost 100 million working-age Americans no longer working. More Americans are today on entitlements than working in the private sector. More Americans are on food stamps than the number of women working in America. Iran is building a nuclear bomb. Russian jet fighters are threatening American ships. Yet Harry Reid obsesses about a rancher late on his rent? Something smells fishy folks.


There are other questions raised about Reid’s involvement. Why did this assault become the #1 priority of government only days after a senior political advisor to Nevada Senator Harry Reid took over BLM? Coincidence?

I think the last sentence, in red, clearly shows who is involved and a level of suspicion should be hightened, for sure!

Now, making this more than someone who didn't pay their grazing fees...... or turtle loving enough.

It is all about money.. CHINA MONEY to Harry Reid and his mini-me son!


its all about the soup

The result was a government assault on the ranch- including snipers with assault rifles, SUV’s, helicopters, airplanes and over 200 heavily armed troops


Just think about all the money spent by the BATF to get the $3 that David Koresh owed in taxes from selling their reloaded ammo at the flea market.
edit on 17-4-2014 by jmdewey60 because: (no reason given)


I would think good old Dirty Harry, is not used to anyone standing in his way of what he wants. His ego is not handling well, a nobody, (in his mind), old man and his herd of cattle, shining such a bright light on his back room dealings.

For that, Bundy must be punished. After all...it's the all powerful Harry Reid he's throwing a roadblock in front of. 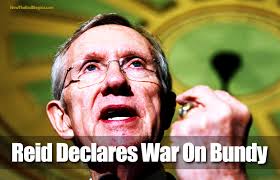 This is his gov't bio- Notice the 4th paragraph!

They don't even hide it!

posted on Apr, 17 2014 @ 02:38 PM
link
The reason Mr. Reid is involved is that He is the senator from NEVADA..
This whole thing has been going on for more than 20 years. And the whole while Mr. Bundy has been sponging off of the people, by not paying his grazing fees. I'll bet he also takes every entitlement available in his industry.
And as far as him being upset that the government "took his land away", what a hypocrite, if his family has been on that land since the 1870's wasnt that Indian land?

punkinworks10
The reason Mr. Reid is involved is that He is the senator from NEVADA..
This whole thing has been going on for more than 20 years. And the whole while Mr. Bundy has been sponging off of the people, by not paying his grazing fees. I'll bet he also takes every entitlement available in his industry.
And as far as him being upset that the government "took his land away", what a hypocrite, if his family has been on that land since the 1870's wasnt that Indian land?

One conflicting thing is that Clark County bought the grazing permits from the BLM a few years ago and cancelled them in favor of the turtle protection issues.

Then we have court orders that appear to give the BLM authority to round up the stray cattle and sell them off to get the money.

But the money may actually belong to Clark County since they bought all the grazing permits.

And there's some evidence that Clark County had at least partly owned the now BLM land at some point in time.

I bet if we look at the overall actions of the BLM we would see a lot more land confiscation, in the west particularly.

I think Harry Reid is commintting TEASON against the people the USA by engauging in subsersive activities.

I am sure Holder and the DOJ are watching this closely, to aid Reid and his cronies.

posted on Apr, 18 2014 @ 12:52 AM
link
Well, it's because Harry Reid has his fingers all over the mess. He is probably trying to intimidate the ranchers so that they do not bring to light corruption charges on his behalf, that's what I would think would cause this kind of reaction.

He has a personal stake in this - skeletons in his closet that he doesn't want to come out, and the way to keep them hidden is apparently by storming this guy's ranch with snipers and other armed forces.

It has been pointed out by journalists intent on covering for Reid that a $5 billion Chinese solar project backed by Reid was recently shelved.

But what they forgot to mention is Reid’s involvement in multiple solar and wind projects across the Nevada desert. Only days ago, Senator Reid was featured in a photo at a groundbreaking ceremony for a new solar project.

Where is that project located? Just 35 miles from the Bundy ranch in Bunkerville, Nevada.

Snopes has more information, although their verdict is it is unrelated:

This link could have more information, it is biased towards Democrats I think:

Ok, forgive me if this a stupid question. Why not take the cattle where there is a low risk of forest fires, and let them eliminate all the dangerous grasses that have over-grown in high risk places like in California or Arizona forests? Pay the rancher and save the state millions of dollars and possibly lives.
Another thing I read is that Chinese investors are trying to buy up this land. Is this true? I know they are trying to buy up houses and apartments in California. Is this even legal?

Thank you for any answers you can give me.

originally posted by: Mountainmeg
I think it's because if one man resists, others may get ideas. It only takes one slave to start a revolution.

such a intelligent remark, Star.

It's a revolution and start in action against the rich and powerful, their scared it may cause a uprising.

Cause and affect, learned that in high school. Won't teach that in school anymore, banned!

originally posted by: Mountainmeg
Cause and affect, learned that in high school. Won't teach that in school anymore, banned!


Cause and effect is part of the "logic" package that got gutted from the high school curriculum, seems like.
edit on 18amFri, 18 Apr 2014 03:33:05 -0500kbamkAmerica/Chicago by darkbake because: (no reason given)

You have corporations, US state senators, Lobbyists, who routinely cheat or don't pay their taxes, yet no SWAT teams, snipers, go after them.

This was a land grab. This was an attempt to intimidate an American citizen and his family.

I'm troubled by all the people defending the government's actions in this. It is ugly. It is fascist. It is police-state tactics.

originally posted by: Mountainmeg
Cause and affect, learned that in high school. Won't teach that in school anymore, banned!


Cause and effect is part of the "logic" package that got gutted from the high school curriculum, seems like.

Sorry, I've have a few cocktails, but your agrreeing with me right?

If so, It seems to me that I can't push home schooling enough for future generations. I watched that death of a student protest sit down, where one was arrested. I wish ten more students were arrested for standing up. Amazing that one stands against while the rest say F it, I'll comply...... Sad

I'm going to bed before the booze speaks for me an a ban predicts my honesty. Lol

Meanwhile, Harry just called the people who stood up for Cliven Bundy 'domestic terrorists'. What a scumbag!

I'm telling ya, there is more, much more than the Bundy ranch.

But, the Dems have insulated themselves pretty good-for now.

posted on Apr, 18 2014 @ 01:28 PM
link
There's some more evidence that connects Harry Reid to at least 2 judges in the 9th Circuit Court that were directly involved in two cases from 2013 involving the orders against Bundy.

The July 2013 case order found in favor of the BLM was signed by U.S. District Judge Lloyd D. George


Then, we have U.S. District Judge Larry R. Hicks, who signed the October 2013 order against Bundy

Specifically obvious is a case where a man was convicted of illegally bundling campaign money for Harry Reid and was sentenced by Judge Hicks who blatantly ignored sentencing guidelines.


Hicks said he was deviating from the sentencing guidelines that suggested a minimum of 41 months in prison partly because of Whittemore’s history of extraordinary charitable giving — an estimated $12 million over the past 20 years, much of it to promote medical research, athletics and education at the University of Nevada, Reno. But the judge the crimes were too serious to justify probation without prison time.

originally posted by: texasgirl
a reply to: beezzer

Meanwhile, Harry just called the people who stood up for Cliven Bundy 'domestic terrorists'. What a scumbag!