The time Apollo missions found life on the moon

The place Apollo 12 landed was the same of the unmanned surveyor 3 two years before, the mission of the surveyor was to study the surface of the moon, it has a small scoop to make grooves in the surface and take pictures to be analyzed in earth.

Unlike Apollo 11, 12 landed precisely where it was supposed to be. The mission was as expected, nothing too relevant to say, the first words of the third man on the moon were "Whoopie! Man, that may have been a small one for Neil, but that's a long one for me." Among the improvements the mission bring was the first color camera in the moon, which they quickly destroyed by pointing it to the sun. Stones and soil samples were taken, some measurement equipment was set on the moon and poor astronauts could not even play golf on the moon. It appears this set of astronauts were particularly clumsy as several rolls of the photos taken were left in the moon surface by mistake of Alan Bean.

The relevant part was they could go to the surveyor probe the second day of the mission and took some parts of the device, including the camera. 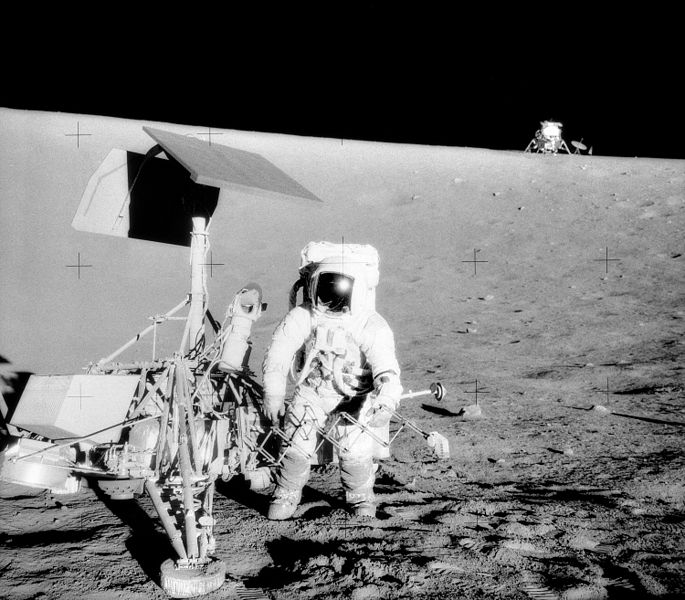 At their return the camera was examined, it appears someone during the ensemble in earth had a cold and sneeze to the camera, as life was found 2 and a half years later of being send to the moon.

A common bacteria, Streptococcus mitis contaminated the lens, it survived dormant in the extreme atmosphere free environment of the moon were temperatures goes from -387 to 253f. Life was found on the moon, earth life but nonetheless this discovery had consequences to how we see life, the possibility of panspermia became a little more real, but more importantly all the protocols for future missions were change to avoid the contamination of other places by human activities.

(A culture plate of the bacteria at CDC Atlanta)

Perhaps not the kind of life here on ATS would like to be found on the moon, but still something relevant young people never knew about.

Link 1
Reports of Streptococcus mitis on the Moon
Link 2

Sorry if it has been posted 1k times
edit on 16-4-2014 by Indigent because: typos (many more should remain)

posted on Apr, 16 2014 @ 08:15 AM
link
Wow never heard of that. But think about the seed of the cherry? trees that were taken to the ISS and planted back on Earth.
Apparently they grew quicker than normal and flowered years before normal.

I wonder if those germs would grow into a giant blob like monster if given the chance?

However I've heard countless times how hardy life actually is... This shows that life is near impossible not to exist elsewhere and can survive all kinds of extreme conditions and environments and will just lay dormant till the right conditions arise

It is widely believed that life travelled here from else where hitching a ride on a comit, asteroid or meteor etc, the same way our water arrived possible at the same time on the same ride

The fact that NASA goes to great lengths being careful not to spread our life to other planets say it all not to mention is quite funny when you think about it, NASA knows life does exist elsewhere but needs that confirmation, when the rest of it's work is based on theoretical facts

posted on Apr, 16 2014 @ 08:54 AM
link
I heard in the past that there was some bacteria contamination on a Moon mission, thanks for providing details.

There is a possibility, however, that contamination occurred after the Surveyor camera was brought back to Earth.


Since the Apollo Program, there has been at least one independent investigation into the validity of the NASA claim. Leonard D. Jaffe, a Surveyor program scientist and custodian of the Surveyor 3 parts brought back from the Moon, stated in a letter to the Planetary Society that a member of his staff reported that a "breach of sterile procedure" took place at just the right time to produce a false positive result. One of the implements being used to scrape samples off the Surveyor parts was laid down on a non-sterile laboratory bench, and then was used to collect surface samples for culturing. Jaffe wrote, "It is, therefore, quite possible that the microorganisms were transferred to the camera after its return to Earth, and that they had never been to the Moon."

I don't think the bacteria will do this, they grow it in CDC after all and it was normal.


I'm not that optimistic about life, the solar system is not too big, there are just a few places to look, and everything else is just too far from us. but is really improbable there is no life anywhere else.

About water, I remember to read somewhere water may have been all along on the planet, the theory of comets is because when earth was too hot water must have evaporated and escaped the atmosphere, but it was found that molten rock acts as a sponge to water, that's what i remember right now.


If this be true, then why in the world (pun) aren't we totally surrounded and immersed in a multitude of similar germs in a much prettier environment here on Earth? In short, why have we survived when germs are certainly more heartier?


It seems a paper in 2011 concluded the bacteria is from before the probe was send to the moon, it says so on the wiki link i provided but the reference is a broken link and i haven't check further.
___

Additionally to what you say, it was also possible the astronauts contaminated the camera in the return trip, if someone find the paper in question would be nice to know how they claim it was ruled out this possibilities.
edit on 16-4-2014 by Indigent because: (no reason given)

My bad i just read what i wanted to read

The "paper" about the clean room operators 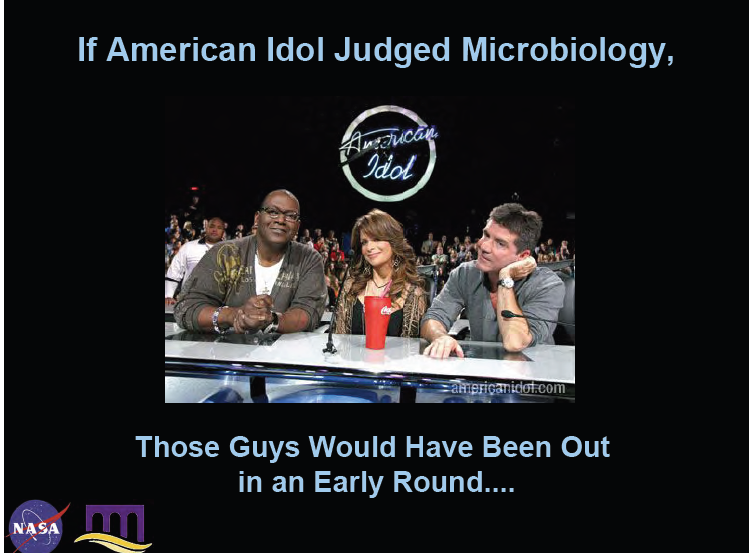 
I don't understand very well what you are saying, the bacteria in question is like the most common bacteria in human nose.


Uhhh… from the Wiki link you provided.

The Surveyor 3 camera was returned from the Moon in a nylon duffel bag, and was not in the type of sealed airtight metal container used to return lunar samples in the early Apollo missions. It is therefore possible that it was contaminated by the astronauts and the environment in the Apollo 12 capsule itself.

Another paper cited therein says something about fresh versus dormant spores and stuff, but in my opinion even the trip home would be enough time to contaminate something in the crew cabin in a nylon bag. Chain of custody for sterility was broken.


Bacteria can survive some highly extreme conditions. As an example, look into what we call "Extremeophiles," which are classified into categories from bacteria that not only survive but thrive in places with high acid, alkaline, low or no oxygen, high salt areas, high temperatures, low temperatures, bacteria that mainly thrive on carbon dioxide, areas with high metallic content, nutritionally limited areas, high pressure areas, high radiation, etc. In short, if anything can survive in space, other than the Water Bear, bacteria most likely can.


I'm glad you just say what i said 2 post above you, even if the bacteria would had indeed survived 2 and 1/2 years in the moon it would be as i said on the op life from earth. Regardless of it was contaminated prior or after it stay on the moon, this find did change the clear room protocols as I stated in the OP.

Means you miss the point of the op as i'm not defending panspermia, i just telling the tale of the camera that got contaminated and was believe true or not to be what i said.

By the way you left out this part

Counterveiling evidence against the secondary contamination hypothesis is the fact that, according to Lieutenant Colonel Fred Mitchell, lead author of the original 1971 paper[4] there was a significant delay before the sampled culture began growing: this is consistent with the sampled bacteria consisting of dormant spores, but not if the sampled culture was the result of fresh contamination. In addition, according to Mitchell, the microbes clung exclusively to the foam during culturing, which would not have happened had there been contamination.[3] Furthermore, if fresh contamination had occurred, millions of individual bacteria and "a representation of the entire microbial population would be expected"; instead, only a few individual bacteria were sampled, and only from a single species.[4]

And the fact that the contamination was in an isolated part inside the body of the camera, how did the astronauts manage that? lab contamination is more plausible.

Additionally to what you say, it was also possible the astronauts contaminated the camera in the return trip


I wouldn't be surprised, as conditions in early space modules weren't exactly sterile. They had poop flying around in the modules, by all that is holy! 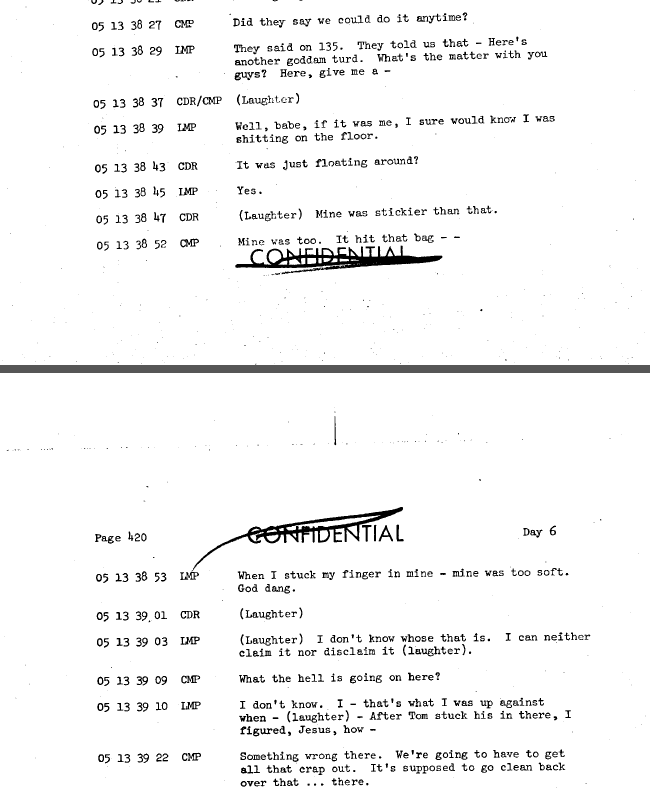 
Those people were truly valiant pioneers

You're singling me out?

Means you miss the point of the op…


I didn't miss a thing "OP". Your thread title states "The time they found life on the moon". They found it "in a laboratory on Earth" after sterile procedures had been violated.

Your own links say that. Next time read them first before making claims of "life found elsewhere".


You still don't get that in the 70s it was concluded it was prior the moon stay, that the 2011 "paper" have no evidence as the experiment can no longer be replicated due to the storage conditions of the camera, and more importantly there is evidence the bacteria was not active when they could verify it state.

You say i dint read what i put there but really come on see the evidence your self and although you cannot say either way if it was or not, there are evidence that suggest the bacteria suffered severe trauma that force it to go to a dormant state.

If you feel single out don't put things like panspermia 0 whateveribelieve 1 when there is nothing related to the op, and if you do don't cry latter for being singled out. my comment about panspermia is because some people that believe in it has used this incident as an example.

is there or not a possibility for it to have survive 2 and 1/2 years in space? ponder the evidence, forget panspermia and come here to say yes or no, cuddles? (˘ ᵕ˘(˘ᵕ ˘)


I was being nice at first. Your title "they found life on the moon" was misleading. Just a little bit?

Hey, its your reputation and credibility.