The night before last, right before waking, I had a dream that ended with this symbol: Four Swords on a black background. Three together and one behind crossing them. They were all my swords, apparently, and related to some kind of "warrior" quality within (that's what the dream had indicated - I don't particularly feel like a warrior, so...??? The swords looked more ceremonial than utilitarian.). In any case, as the image was burned into my brain as I awoke, I decided to investigate it. I've roughly reproduced the image below (the three connected swords were all different, all gold -as was the one that crossed behind), to give you an idea of what I mean... 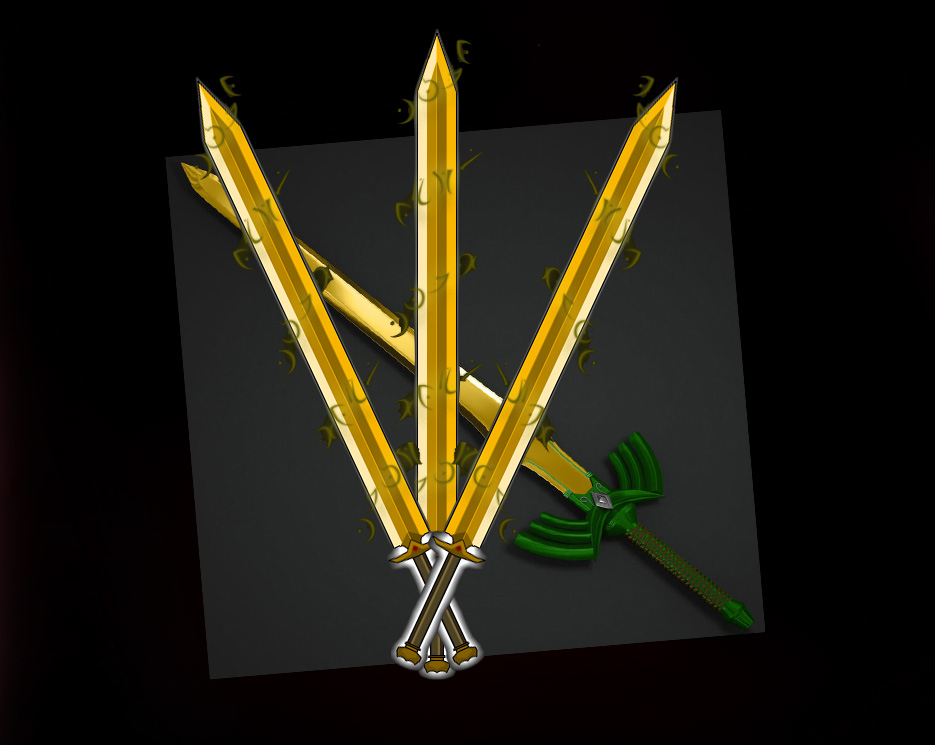 So I did some hunting for interpretations of the image. I did not find the exact image anywhere, but I did find the Four of Swords in the tarot and looked at the meaning. It about blew my mind! It described precisely what I needed to do, and what I was feeling. Now, I'm not a big tarot card reader - I know only bits and pieces of the tarot cards and their meanings, so I was surprised that my subconscious (or whatever) came up with such a perfect symbol for me to see. It gave me permission to take a well-deserved and desperately needed break after pushing for a long time to get things done, being sick, etc. I'm actually experiencing a lot of fatigue yesterday and today, which also relates, after a huge five hour work event on Saturday that left me completely spent.

Here is part of the "meaning" of the Four of Swords from one source:

The Four of Swords shows a period of rest and recovery after a time of challenge, with the promise that, once recovered, you can and will return to the challenge. In the meantime, the Four of Swords provides a new challenge – to stay silent and inactive. This is the time build up your mental strength. Meditate and spend time in a calm atmosphere. You need to replenish your strength and spend time in spiritual thinking. You need to rest and relax.

The Four of Swords is a reminder that after every crisis and before every new challenge, there is always a time of relaxation and contemplation. Constant stress and tension will break even the hardest and most resilient of people but brief periods of rest enable you to refresh your energy, concentration and focus, ready for the next challenge. These rests should be used wisely, to heal the body and ready the mind.

The Four of Swords is also a sign that you can stop worrying, put down your defences and take a breather from the chaos around you. For the moment there is a truce and you can catch your breath without being attacked again. However, bear in mind that a truce and peace are not the same thing. The Four of Swords is a guarantee that challenges will return to your life as soon as you are ready to face them, so make the most of the stillness and quiet you have earned but never lose sight of the fact that the battle is not yet over, and that there is still work to be done.


If anyone else has more information or other ideas, has seen the exact symbol before, etc., please chime in!
Thanks for reading,

I've done some research and taken a few classes.

There is not a way to explain dreaming but you should use caution before you view a dream as a sign of future events.


Thanks for posting, minusinfinity. I do understand what you mean about using caution regarding seeing a dream as pre-cognitive. I think this particular symbol was more a current state-of-being and my body/mind/spirit telling me what I needed to do - which is rest - in a way that would grab my attention.

peace to you and thanks again,
AB

Oh and I will need back Excalibur when you are done with her! But yes take a break!
edit on 14-4-2014 by abeverage because: of the lady of the lake needing a break!

posted on Apr, 14 2014 @ 03:40 PM
link
Never underestimate the power of dreams. It's true sometimes there are symbols that present themselves and definitely are just what you need at this time in your life. Many would dismiss it all as just brain garbage, and quite often it is. But I have found that the things that "stand out" in my dreams , (as your sword symbol did to you), almost always can be deciphered into an answer to a question I had been pondering, or decision I had to make. It's quite individual and personal, and what one image means for me, would not mean the same for another. Over the years I have come to remember what seeing certain things in my dreams means for me,and try to adjust my life accordingly. When I dream something new, as you did, I do exactly the same, research it and see what it means for me. I know many are skeptics, but I believe in it. After all, nobody is closer to my subconscious than me!


Hey! Get off ATS and relax! haha just kidding. I could use some rest too. Just came off the weekend from hell at this restaurant.. one of the dishwashers quit, I am the other. Then 2 other people quit when they had to work dish, and then the weekend when we are amazingly busy. It's about 100 people an hour and another guy no call no shows and I am left alone to fend off the hordes of plates and glasses. But I somehow did it even though I was angry and now I have 2 days off. 4 of swords indeed!.

I like it when I notice dream meanings for me about something I need to notice. the ones that are dead on meanings usually relate to how I feel and how I treat other people. My subconscious smacks me sometimes, but I like it.


Wow - sounds rough! You, sir Knight, are in need of the Four of Swords yourself!

Sometimes the subconscious is tricky and does smack me upside the head, but at least it makes it entertaining most of the time.

Hope you dream of things other than mountains of plates! I remember doing my job in dreams past, when I had a particularly boring job, waking up and having to go to said job - it was like I never left!

Thanks for the reply,

posted on Apr, 14 2014 @ 05:56 PM
link
Very cool. It's those moments of mystery and magic, when experienced or expressed by others, that really makes one wonder about the underlying reality of being.

Well it does me.

S&F and thanks for sharing!


Well, I think you found your meaning in the four of swords in Tarot.

Have you studied any tarot in the past?

If you have, your sub-conscious could of held onto that card until you needed the meaning for something your mind was working on.
edit on 14-4-2014 by Darkblade71 because: (no reason given)

posted on Apr, 14 2014 @ 06:06 PM
link
Well OP at least you were able to make some meaning that you could relate to from your dream, unlike mine this morning that ended with a phone call from Mike (character on Breaking Bad) telling me we have to have a meeting. LOL If you've never seen the show let me just say you would not want a call from Mike.

Thanks for sharing, now get some rest.


Hey Cirque! Glad you stopped by the thread - I was hoping people might see it as a little bit of the Mystery - I certainly did.


Hey Darkblade! Good to see you!
I wouldn't say I've "studied" tarot in the past - I know some of the Major Arcana and the basics of the "suits" but I don't know much about specific cards. It is still possible, however, that i saw this card in the past and my subconscious remembered it and gave it to me as a symbol. The google search for Four Swords came up with the tarot card and while I didn't see one to match my dream, it intrigued me enough to look further, only to be astonished with how accurate that card was to my situation.

Wow - I'd hate to get that phone call...seriously... Not all dreams are related strongly to our waking life, thank goodness! (If that were the case, I don't know how many times I would have been killed by thousands of spiders...stupid stress dream...lol!)

I am definitely resting - hoping tomorrow I have energy as, frankly, stuff needs to get done...