posted on Apr, 15 2014 @ 11:15 PM
link
The pyramid shaped structure you are referring to was the primary command and control hub for the Sprint Missile System. It maintained communication with four missile batteries not too far away.

The pyramid itself is a radar array. Just south of that structure, you can see the smoke stacks of the power plant that ran the facility.

The sole purpose of this facilty and the reason it is located in North Dakota is that it was supposed to protect the majority of ICBM facilities from nuclear attack so that we would still have second strike capabilities if WW3 broke out. 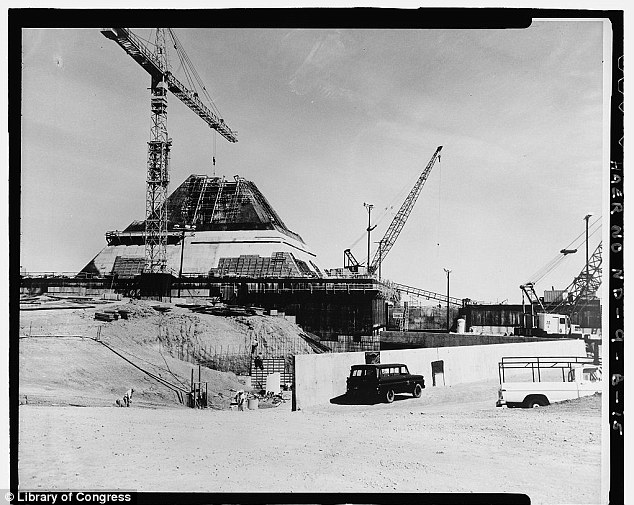 arielsdad
i just google earthed nekoma north Dakota and the complex is still there but by the looks of the tarmac it looks like its been abandoned years ago, and not a single vehicle anywhere.

FWIW, the "Pave Paws" early warning radar at Otis ANGB in Massachusetts looks nearly identical and is still in operation. At least it looks almost the same as many of the installation posts in this thread. When I lived in the path of it, people were always paranoid about the possible effects, but I am not sure if anything was conclusively admitted by Uncle Sam.

Not sure if it has anything to do with the site, but when my Army National Guard unit bivouacked within visual distance of that building, it was the only time in my life I ever saw every spider around biting people. It was crazy, we had 3 soldiers brought to the post hospital, 8 others took lots of dipenhydramine, and still others were bitten but not badly affected.

Or a shipboard version on the former USNS Observation Island. I spent 9 months on that baby.

thanks for posting this one. If you look at the aerial view most of what is in this picture ends up underground except the main structure. Still wish I could find the underground schematics.

posted on Apr, 16 2014 @ 06:25 PM
link
Apparently the "pyramid" was a testbed for researching synthetic aperture radar. AKA flat panel radars. Most modern navy ships have those "pyramids" on their superstructure, and some other military vehicles (air defense or anti-missile systems) may have them as well. Pyramid shape gives the most directional coverage for the least surface area (alternately you can have a rotating assembly, but it'll always have that large blind spot vs. multiple panels), so it's pretty much form following function.

howmuch, I love reading your posts. As always, what a kick@$$ find. Thanks for sharing, & SnF!