The Bundy Boondoggle - Nevada standoff: Yes, it’s solar-industry cronies (but NOT the Chinese)

Both Reid, and his son are in deep.

“[Harry] Reid’s push for solar energy development in southern Nevada included attendance last month at a groundbreaking ceremony for a solar power facility that involves the Moapa Band of Pauites and First Solar Inc.,” said the KLAS-TV report. “But that 250-megawatt power plant will be roughly 35 miles southwest of the Bundy Ranch.
www.washingtontimes.com...


35 miles southeast could be where the cattle graze. Recall, Bundy owns some land,
some land he is using for grazing.


"They're in the area around Tikrit and Baghdad and east, west, south, and north somewhat."
- Donald Rumsfeld...
...ooops ....wrong invasion...haha, sorry

according to the map on page two


according to the map on page two
roughly 35 miles southwest of the Bundy Ranch.
is somewhat roughly in the middle of the big orange splash that says "Bundy's cattle grazing around here"

Wonder where this guy got the info.

Bundy Ranch - What You're Not Being Told

There are some very powerful people who have done their best to cover up what really happened at the Bundy ranch in Clark County Nevada. Fortunately they failed.

No, the SEZ is outside the area where the cattle have been grazing.

This post has a map that shows the different areas.

posted on Apr, 15 2014 @ 01:31 PM
link
We know that Harry broke the deafening silence yesterday with his thundering 2 liner.

And so did his spawn son Rory.

Rory Reid appeared on KSNV's What's Your Point with host Jeff Gillan and told Gillan that Bundy should be prosecuted:

"He is not victim and he’s not a hero. He’s been using that he doesn’t own for over 20 years and he didn’t pay. He broke the law. There are hundreds of ranchers throughout Nevada that conduct their profession honorably. There’s thousands of them throughout the country and when they have a dispute with the BLM they try to work it out.

Reid continued, "I think most people care about their reputation and I think he’s been exposed as somebody that has broken the law. The Nevada Cattlemen Association, which is the trade organization that advocates for cattlemen in the state of Nevada—not even they support Cliven Bundy at this point. We believe in a country in which we are subject to laws and you cant just ignore the laws we don’t like. I think clearly if state and local prosecutors look at this more closely, they’re going to find that he broke the law and he should be prosecuted."

Additionally, Reid was critical of BLM's inability to conduct a successful operation in Bunkersville saying, "The BLM shouldn’t have started this if they couldn’t develop a plan to finish it successfully.

What a weak response.

Obviously the Reid mafia is in deep trouble with TPTB on this boondoggle.

Failures are getting scrutinized.

No, the SEZ is outside the area where the cattle have been grazing.

This post has a map that shows the different areas.

And here's the target zone of the BLM mitigation.... 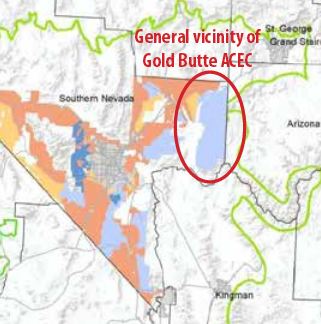 and here's another map... 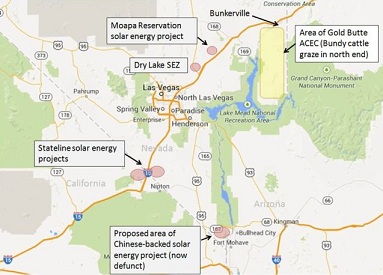 and here's the BLM report .... www.abovetopsecret.com...

None of that contradicts the map that Olivine posted.

It's all about the water.

No, it was not debunked.

The map with the big sloppy circle covers more area than the actual perimeter of the Gold Butte ACEC. It is even labeled "General vicinity".

Still, if you take a close look at that map you will see that the SEZ is still outside that circle.

No, it was not debunked.

The map with the big sloppy circle covers more area than the actual perimeter of the Gold Butte ACEC. It is even labeled "General vicinity".

Still, if you take a close look at that map you will see that the SEZ is still outside that circle.

And the big sloppy circle is a map directly from the official report from the government agency BLM.

And that sloppy circle area is targeted by the report as an area with problems detrimental to the entire project.

Keep in mind also that the SEZ is a proposed area not under construction yet.

It's all about the water.

The water is only part of the issues.

None of that contradicts the map that Olivine posted.

The SEZ is outside the Circle in the map you keep posting just as Olivine pointed out. You keep going on like it shows something different.


If you thought there were water wars brewing before, just wait. The sun is often touted as a fantastic source of energy, which it is, but there's a hitch: Many solar projects consume enormous amounts of water. How much water are we talking? According to a recent New York Times article, proposed plans for two solar farms in Nevada would gulp up 1.3 billion gallons of water annually--or 20 percent of the area's available water. And the worst thing is this heavy water use in renewable energy projects is all about the bottom line.High-Profit Solar Technology Devours Water

Ties right in with the Gold Butte Bundy issues.

Yes it sure does, great info Neo.

Harry can claim to be innocent, he should
be questioned under oath! See if the dirt sticks!

There are many questions that need to be asked. Such as, who ordered the initial raid? Why did Clark County sell land to ENN at far below its fair value? Who ordered the BLM show of force? Why did the BLM impose a no-fly zone over the Bundy Ranch so the media could not get video or photographs of what was going on?


I was thinking about the feds. That they've put fed insiders into the ranks of the protestors is a given. But what if they have a plan next time to initiate a confrontation so they can crack down on the protestors and make a statement with violence. They have somebody fire off a shot or set off a firecracker and then have some of them ready to open fire on that signal. They start a shooting spree and blame the protestors. If they really wanted to have it be justified, they could target one of their own, someone just there like a trooper or everyday joe called in) and shoot him. Blackwater snipers doing their job.
The protestors start getting gunned down and some of them will return fire. Then cell phones and video cameras get confiscated to cover up any evidence.
A word of warning to the protestors. If that happens, run. Take your videos and don't turn them over to anyone and get it online ASAP. Watch what you say and watch for characters in the back or in areas of cover at a distance.
A word of warning to the feds. Watch your backs. You're expendable too and you can't trust the guys beside you or the people giving you orders.