The Game of Dogs and Jackals, a game board that is over 3800 years old 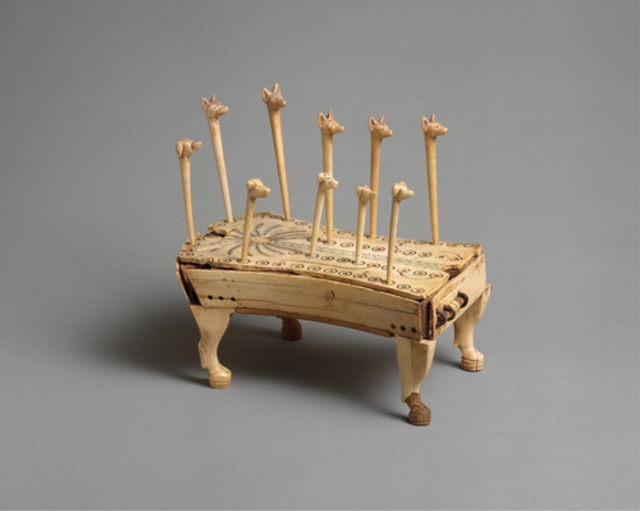 Unfortunately, the instructions has been lost through the mists of time, but it's fascinating to think that this game is over 3800 years old.

Some people have been trying to put forward their own ideas of how the game was played:


It's fascinating to think that people throughout history have been inventive, playful, and skillful in many endeavours in life.

It has amused me no end to think that over the years I have heard many people suggest the ancients were "slower than we are today", or that they didn't have as much "culture". Although, here we have another example of how people throughout all the ages of history have been anything but slow, or lacking in culture.

It's just a shame that things are lost to time, such as the rules of this game. It's a wonder that the game itself even survived. I am sure though, that with all the records that the Egyptians kept there must be some instructions somewhere...

I read through the rules on the link. Think they're most likely wrong about the coins used to determine moves.
It looks like a racing game to me. I think it was played with dice and was played more like Backgammon.
Kind of a cross between Backgammon, Cribbage and Sorry.
Very cool! Thanks for posting!

In the book series The Wheel of Time, Robert Jordan (a known freemason) used a soft-veiled version of this game which he called "Snakes and Foxes."

Considering all the other parallels to Freemason secrets Jordan hid within his books, it certainly makes me wonder what the Freemasons know about the origin of and real purpose behind this game.

(And no, I won't believe any freemason members who jump in and claim total ignorance. I might believe that you personally are ignorant, but considering the use of ancient Egyptology and beliefs ingrained in the Freemason rituals, I won't entertain the idea that Freemasons as a group know nothing on this topic.)
edit on 13-4-2014 by JonButtonIII because: (no reason given)

I did a study of ancient games last year and was going to do a thread perhaps one day. This is one of the games I read about. Learning about the ancient games was a personal study I did to pass time and it fascinated me for months in 2013.

Ancient Games evolved from the normal things the people were doing , they were just replaying or rein-acting them out during their leisure time, an early form of Distractions. Anyways I decided to read up more on it because it totally distracted me and I thought why not I might learn a thing or two more about ancient cultures and practices.

I was intrigued by the whimsical nature of the games but also the intelligence behind them.

There are several theories on how board games originated.

Here are some more ancient games to check out:


Here is a tuby on ancient games. At the 49.31 mark a lady discusses Hounds and Jackals, you might find it interesting.


It brings back memories... thanks for sharing !

nothing to see here (:


That looks similar to the game they played in the later season of "Lost."
I think that was called "Senet" and was ancient egyptian.


Loooking at that link though,they seem to be two different games.

posted on Apr, 15 2014 @ 06:36 PM
link
It's an awesome find and it shows that they were more inventive and thoughtful than most people think.

I also believe that it was played with a sort of dice or a rock, paper. scissors way of moving your pieces.


I like how the four legs of the game are carved to resemble actual legs and hooves.
edit on 15-4-2014 by Aleister because: (no reason given)

It also explains another game called Senet which is depicted in a scroll:

I'm not sure about the rules in this page. From the game board it looks like it would be enough to get all your pieces in the last six holes. rather than in the last one. It would seem to bea game of racing down from the shade of the palm tree to get to the pool of water.